Although summer doesn’t officially begin until the 21st of this month, the state will experience mid-summer temperatures during the first half of this week. Dollar spot has been active for a couple weeks now and brown patch and pythium blight could make an appearance the next couple of days with the temperatures expected to be in the mid-90’s. Let’s take a quick look at the weather the state experienced in May. 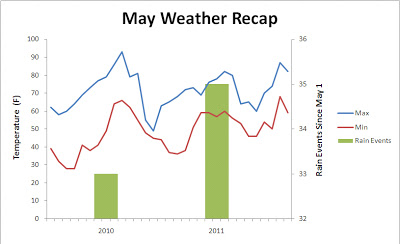 The month of May also saw a number of severe weather events with strong winds, thunder, and lightning. Turf areas can be a dangerous place to be during thunderstorms because they are generally open areas scattered with individual trees. A lightning bolt will take the shortest route between the cloud and the ground, which means that a golfer standing in the middle of a fairway or huddled under a tree is a prime target for a strike.

The Golf Course Superintendent Association America of America (GCSAA) publishes a list of lightning safety tips. Take time to review these safety points with your crews as we enter the summer season.

•  Seek shelter at the first sign of a thunderstorm. If the course's warning system sounds, take cover.

•  If possible, get off the golf course or go to a designated lightning shelter.

•  Do not stand under a lone tree. This is where most people are injured or killed.
•  Stay away from water.

•  Stay away from your golf clubs.

•  If your shoes have metal spikes, take them off.

•  Move away from your golf cart.

•  If stranded in the open, go to a low place such as a ravine or valley.