The recovery of Kentucky bluegrass following this summers drought has been amazing.  Most areas that were completely dormant in September have now recovered.  The reason for this is the rhizome system of this amazing lawn species.  The picture below shows this underground stem system and how it grows from the plant.  The rhizome is a stem and not a root.  It has buds on every node and every bud is a reproductive structure.   These buds are protected underground and can remain inactive for months.  When they are needed for the survival of the plant, the will begin to grow and form new crowns. 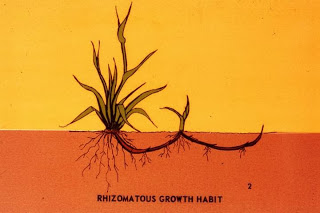 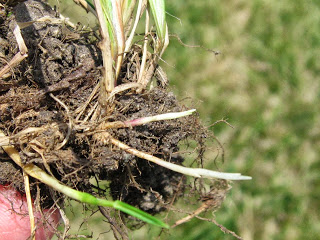 Here are some interesting pictures that I took at the research station late in the summer and through the fall showing the ability of Kentucky bluegrass to recover.  The first picture shows an area around an irrigation repair where plywood was left on the Kentucky bluegrass turf long enough to kill all of the plants above ground.  It looks dead. 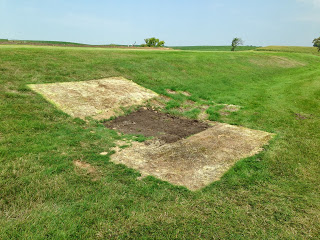 Here is a picture taken a couple of weeks later.  Notice how some green is beginning to appear.  That is regrowth from the underground stem system. 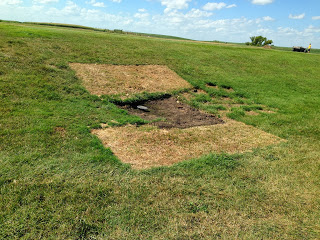 Approximately 4 weeks after the plywood was removed, the area is showing considerable improvement without any reseeding. 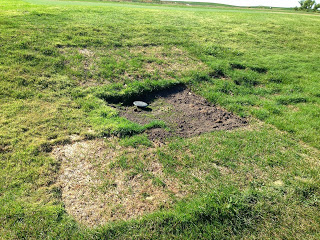 This picture was taken in October.  It shows almost complete recovery.  This is the same type of recovery that we are seeing from drought affected areas this fall.  It is one of the main reasons that we use Kentucky bluegrass the way that we do in turf industry. 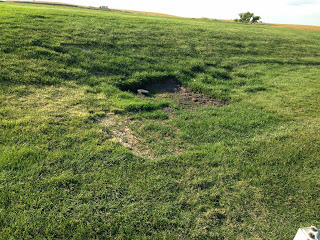