I have been called out to look at a few areas this week that people thought were disease. When I started to dig in the area, the first thing I noticed was hollow sheaths that break off at the crown. 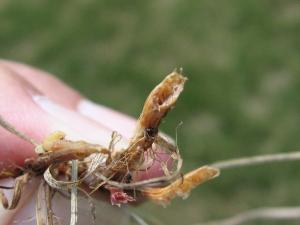 This is damage caused by bluegrass bill bugs. The insect gets its name from the long snout or bill on its head. The females use this to burrow into the sheath and lay an egg. 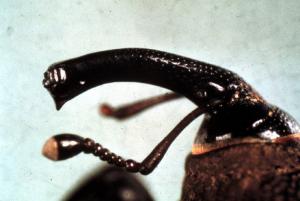 Here is the kind of damage that you see from the feeding. It looks like leaf spot until you look closer. 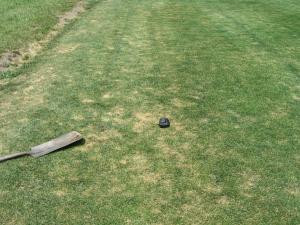 The feeding is going on now, July 16, and will continue into August. If you dig in the area you should find larvae (see below)

Here is a particularly good picture of a larvae and a pupa in the same area. The larvae change into pupa and then into adults. 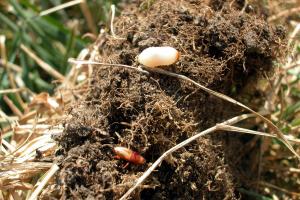 This is a close up of a larvae as they appear now. 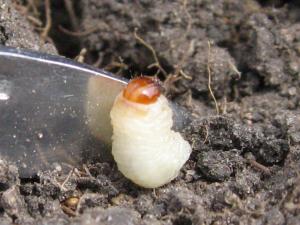 The obvious question is "should I spray now?" The answer is no. The damage is already done. You will need to treat for the adults in the spring before they lay their eggs. Egg laying generally takes place from April 15 to early May in central Iowa. Any of the common, contact insecticides will work. It is all in the timing. Once the egg is in the sheath, it is too late.