It's about time for Frost

This week historically brings the first opportunity for frost in a good portion of the state. Fortunately, that doesn’t necessarily mean the terminal end to the growing season for our cool season grasses, unlike many other plants and crops here in Iowa. Frost formation can come in
many levels of severity affected by environmental factors such as low temperature, dew point, relative humidity, wind speed, cloud cover, and elevation. Turf managers only slightly control a few factors such as irrigation and moisture availability, applications of wetting agents, and cutting heights of the turf. Frost formation on turfgrass will begin or advance the entrance into dormancy as the plants prepare for the winter months. Though, the main concern that is always on the mind of the turf manager is damage to the plants due to traffic on frost laden turf. This can be a concern on all turfgrass areas, but especially on gra 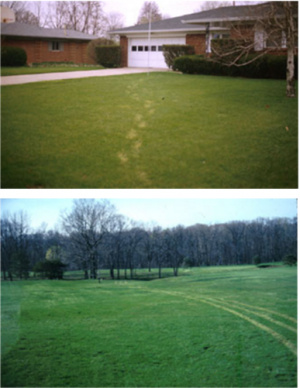 ss such as on golf course greens.

Light frosts that are essentially frozen dew on the upper leaves of the turfgrass plants as the temperature approaches 32 degrees. This typically occurs close the coldest point of the night usually around sunrise, or in golf course terms right when you would like to mow. As the ice forms on the plant it begins to freeze the plant cells in the tissue of the turgrass leaf. This weakens the cells and makes them vulnerable to permanent damage, kind of like cracking an egg. In general, most damage primarily occurs on the leaf tissue, but in heavier frost events and on lower mowed turfgrass the damage can extend down into the crown. If the frost traffic occurs and cells near the growing point are damaged, the plant could be a complete loss.
This issue of the frost setting in causes not only delays in your maintenance system, but delays in golf play or other turf activities. The key is that time is money. So, we all want to limit the time our employees are at the shop, or golfers are holding up tee times, etc.
What can we do to limit these time delays? One practice that is commonly used is a light irrigation cycle which contains water that is warmer than 32 degrees to melt off the frost and warm up the surface. The issue with this is that it must be timed properly to not form more ice on the system. The other thing to remember is that the irrigation will only knock the frost off of areas it can reach, so cart or foot traffic damage can occur leading to the irrigated areas.
I have included a chart referenced from a past issue of Horticulture Home and Pest News authored by Richard Jauron. As you will see the data is somewhat dated, but after conversations with State Climatologist Harrry Hilaker the fall dates still are very accurate. The spring dates and growing degree days may change slightly. 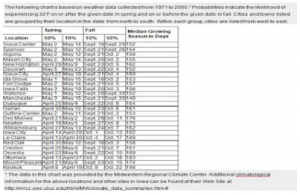 As with all issues involving the weather it is hard to tell what might actually happen. Good luck finishing up the growing season!