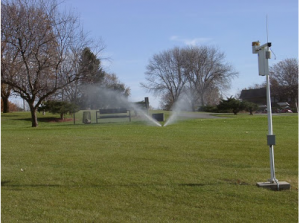 If you haven’t already done so, the ritual of irrigation blow out is certainly on everyone’s mind this time of year. This procedure signifies the end of another growing season along with the realization that winter and the accompanying freezing temperatures are probably right around the corner. Properly blowing out an irrigation system ensures that minimal damage will occur during the winter months. Although blow out is a yearly occurrence, there doesn’t seem to be a great deal of literature available about this important procedure. There seems to be various philosophies and most learn from field experience. 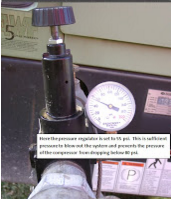 The pressure regulator is usually mounted just off the compressor. The pressure can be monitored and adjusted by a handle on top of the regulator. I have often heard that 50 psi is sufficient to blow out most systems. Obviously, the higher the pressure, the greater the chance of causing damage to the piping system and the sprinkler heads. The other consequence of using higher pressures is coupled to the pressure of the compressor. 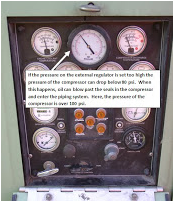 ulator will decrease the pressure inside the compressor and vice verca. Most compressors should not be operated under 80 psi. Under 80 psi, oil can blow past the seals in the compressor and enter the piping system. Of course you won’t realize this has happened until you charge the system in the spring and oil comes spewing out of sprinkler heads.

Let me know if you have any tips from the field concerning winterization of irrigation systems. Hope everyone has a safe and successful blowout.