The research for my PhD program focuses on interseeding. Specifically, I am interested in developing methods which would allow a turf manager to convert to new, improved varieties without taking an area out of play. Interseeding is such an interesting topic because it has been an area of great debate. Most researchers contend interseeding is not possible while some turf managers insist interseeding is an effective way to add turf to already established areas.

One of my interseeding studies is located on a practice putting green at Hyperion Field Club. Below are the details of the study and why I think this project has a chance to be successful.

Presence of Poa annua – The practice green where the study is located has between 50-60% poa. So why would this help the interseeding process? The success of establishing new seedlings in existing turf is closely tied to plant competition. Trying to establish a cool-season species in established cool-season turf is difficult because they both share the same growth cycle. This is also the reason why overseeding in the southern U.S. is so successful. Cool-season grasses seeded into warm-season turf works quite well because they have different growth cycles. In our situation, even though poa is a cool-season species it is a winter annual. Winter annuals germinate in the fall persist through the winter and spring before ending their lifecycle during the summer months. 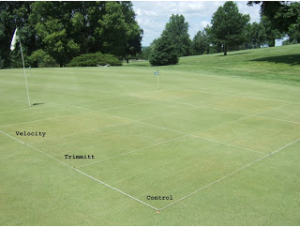 Establishing a creeping bentgrass seedbank – There are many plants that have been classified as “invasive” species. A shared trait of these plants is their ability to produce large volumes of seed and establish a seed bank. This is one reason why poa is so successful at colonizing established putting greens. I am borrowing this concept and attempting to establish a seedbank of creeping bentgrass. Bentgrass seed is being spiked into the green every 14 days at a rate of 1.5 lbs/1000 f 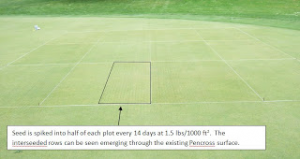 Accurate, non-disruptive spiker/seeder – The attraction of converting through interseeding is that play can continue during the conversion and revenue is not lost. Therefore, the process of placing the seed into the putting green must be non-disruptive. I’m using a walk-behind Maredo spiker/seeder to seed into the putting green. The company that manufactures this machine also makes floating heads that mount on a triplex unit. This machine accurately meters creeping bentgrass seed into many small holes. There is minimal disruption and play can follow directly behind the machine. 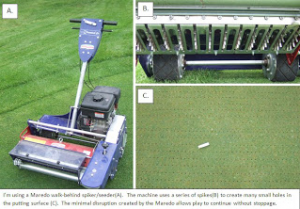 Choosing aggressive varieties of bentgrass – Because the Maredo creates minimal disruption, the opportunity for new seedlings to germinate and establish before the holes close is small. Therefore, it is crucial that the bentgrass species selected for the interseeding process possess high vigor. I recently conducted a germination experiment with many of the new, improved bentgrass cultivars. The results of this study showed that the cultivars T1, Penn A-1, Penn A-4, Crystal Bluelinks, Pennlinks II, Independence and Declaration germinated significantly faster compared to Penncross. Based upon these results, I am using Penn A-4 as an interseeding species. 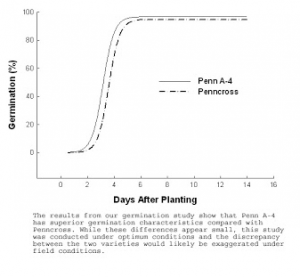 Interseeding timing and seeding rate – In addition to spiking seed every two weeks to half of each plot, the entire study is interseeded three times a year: May 28, July, 30, and September 17. The May 28 and September 17 calendar dates correspond with spring and fall aerification and seed is sown at 1.5 lbs/1000 ft2. Research has shown that interseeding into poa is most effective when performed mid-summer. The July 30 calendar date is designed to introduce seed into the putting surface when poa is at a competitive disadvantage due to summer stresses in addition to the Velocity or Trimmitt. The July 30 seeding will be sown at 3.0 lbs/1000 ft2. The higher than normal seeding rates are designed to account for the high mortality rates expected from traffic and plant competition.

I started the study this spring and it’s scheduled to run for two years. My first round of data will be collected this fall and I will be presenting the results at the Iowa Turfgrass Conference. Any comments or questions regarding this work can be directed to mjones99@iastate.edu.