Here is my first report of grubs in lawns this year.  The surprising thing is that it is so late.  We generally start seeing grub damage in early August.  Here in central Iowa it has been so dry that I have not observed any grub damage yet.  We are now over 60 days without rain and the lawns are completely dormant unless they have been irrigated.

These two pictures are from Rob Elder of Omaha Organics.

The first picture shows the typical damage observed on lawn infested with grubs.  This damage could be the result of a number of problems, however.  It is important that you do a little digging to see what is underground. 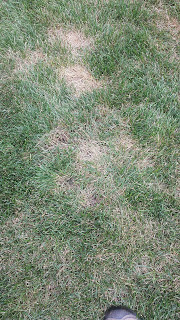 When Rob did that, he found the typical C-shapped grub feeding on the root system just below the crown.  This is likely a Masked Chafer grub, although I would have to see the grub up close to be sure of its species.  Chafer adults lay their eggs in the late spring and early summer.  The brown colored adult beetle is about one quarter inch long and has the classic "mask-like" coloration around the eyes.  They often appear on your screen door in evening during the egg laying period.

The eggs hatch in late July to early August and the grubs begin to feed a couple of weeks later.  We normally see them from early August to early October in central Iowa.

There are post emergence controls, but they have to be watered in to get to the grub and that is difficult, particularly in dry conditions.  The neonicotinoids like Merit (imadacloprid) can be used in late June to early July to prevent the grubs from maturing.  If you have a grub problem this year, write that on your calendar for next summer. 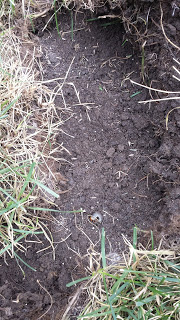 Here is a picture of the adult stage. 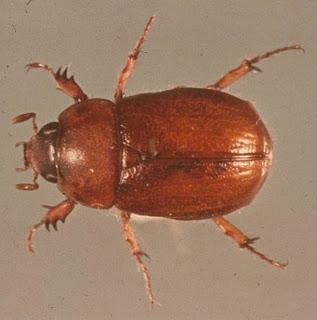