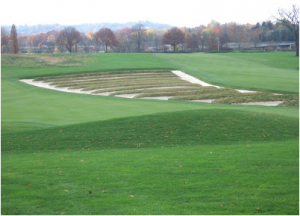 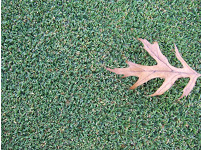 This week I traveled to Pittsburgh, Pennsylvania to attend the Agronomy Society of America meetings. The meetings are held annually and scientists from all across the world come together to present and talk about their research. I presented on the findings from my germination study that I posted on the blog last week. Part of the conference experience included a tour of Oakmont Country Club and Heinz Field.

Oakmont C.C. was really beautiful and we had a nice day for our tour. 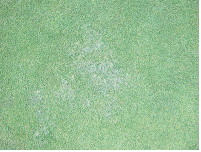 The weather in Pittsburgh is slightly cooler compared to our temperatures in Iowa and they receive a bit more rainfall. As a result, they manage annual bluegrass as the primary species on their putting greens. The density of poa is really impressive when it exists as a monostand (picture above). However, they do fight contamination from creeping bentgrass (that seems like a weird statement) and it appears out of place (picture to the right). We also had an opportunity to see the church pues which are much larger in person than I expected (picture at beginning of post).

The second stop on our tour took us to Heinz field. In addition to hosting the 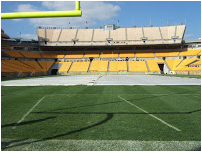 Pittsburgh Steelers, Heinz field is also home to the Pitt Panthers. The field is also used for a handful of high school football games and a few miscellaneous events during the year so it receives a good amount of use. The field is Kentucky bluegrass overseeded with perennial ryegrass during the season. The middle portion of the field has a heating system underneath the turf. The field had been overseeded with ryegrass and the heated portion was covered up during our visit to promote germination of the seed and to stimulate growth of the existing turf.

The remainder of the trip was devoted to attending sessions where graduate students and professors present findings from their research. I attached links to abstracts from the talks that I found most interesting and though you might too.

Potential Use of Mesotrione in Turfgrass Systems
http://a-c-s.confex.com/crops/2009am/webprogram/Paper55382.html