On September 4, I put up a post warning that Gray Leaf Spot might show up in Iowa because of the unusually warm conditions around labor day.

On the 4th I wrote the following:
"This disease is caused by the fungi Pyricularia grisea. It seems to selectively hit perennial ryegrass on intensely managed areas such as golf course fairways and sports fields. Under the right conditions, it can be more devastating than Pythium blight. When it hits, it can wipe out large areas of turf overnight.  Fungicides, such as Banner/Daconil will control it, but they must be applied before the outbreak.  Once the disease begins, it is too late to apply.  The reason I bring this up is that we are in the same weather pattern again this year.  The disease does not always occur when its hot around Labor Day, but it did last year and I would watch for it this year".

What I didn't know at the time was that it would be me that would get hit with the gray leaf spot.  When I went out to take data on the perennial ryegrass trial at the research station in mid September I found that the ryegrasses in the trial appeared to have collapsed.  They looked terrible.  I then looked at two other areas of perennial ryegrass on the site and saw that it looked the same.  Andrew Hoiberg, who recently graduated with his Ph.D. was at the station at the time and commented that it looked like gray leaf spot.  On closer inspection, that is what it appears to be.  It was right on time, shortly after Labor Day during an unusually warm spell.

This trial is part of the national turfgrass evaluation trials (NTEP) and we purposefully do not treat it with fungicides.  The damaged cultivars are beginning to show some recovery as of the beginning of October, but they are still showing signs of the damage.  Under normal conditions, we would simply reseed into the ryegrass and we would have it back in a couple of weeks.  We are unable to do that here because of all the different varieties that are involved.  We will have to wait for recovery.

By the way, is it Gray Leaf Spot or Grey Leaf spot?  You will see many examples of each if you search the internet.  I'm using Houston Couch's book as my source and going with Gray.

The pictures below are of the site in mid September when the damage was most severe.  The first three are of the NTEP perennial ryegrass trial.  The last four are closeups of the damage. 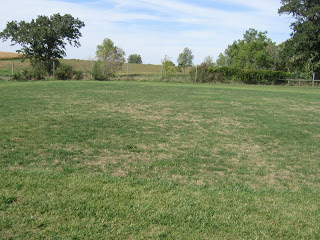 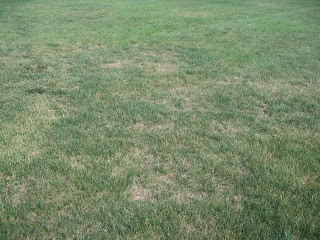 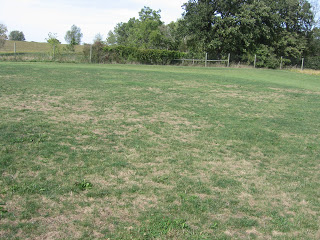 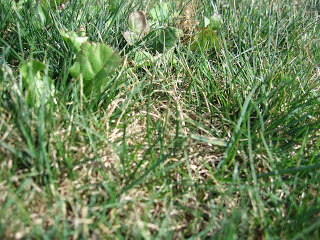 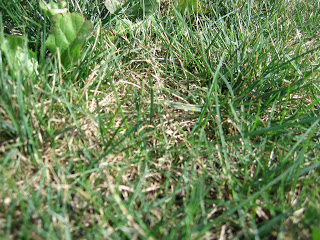 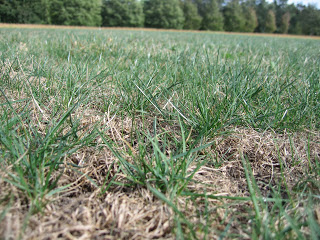 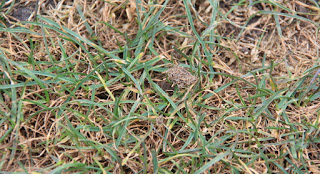