The following is an article that is conjunction with a presentation that I made last week at the Canadian International Turf Conference in Vancouver.  It will appear later this year in the Canadian Groundskeeper Magazine.

Here is the link to the article as it appeared in the July 2014 issue of the Canadian Groundskeeper:

While management of plants on sandy soils is relatively rare in agriculture, it is very common in the turf industry.  Sports fields andgolf course greens, where all of the soil has been excavated from the site and replaced with a high sand media, are the norm rather than the exception.  Many turf managers are faced with the task of growing grass on soil in some parts of their operation and on sand on others.  There are some important differences between soil and sand-based systems and a different approach, particularly in the management of fertility programs, are required for the two areas.

One of the main differences will be cation exchange capacity (CEC).  CEC is defined as the ability of the soil to exchange cations.  The cations are a series of positively (+) charged elements in the soil.  The primary cations in the soil are hydrogen (H+), calcium (CA++), magnesium (Mg++), potassium (K+), sodium (Na), and ammonium (NH4+).  Each of these exists in the soil with a positive electrical charge.  The fine soil particles and the organic component of the soil generally have a predominately negative (-) charge.  These charges act like magnets in the soil and the positive charges are attracted to the negative charges and are held in place for “exchange” with the root system (Figure 1).  This is a key part of soil fertility. 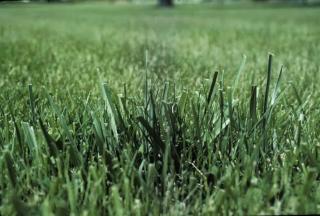 The measurement of CEC on your soil test form is usually expressed in millequivalents (meq)/100 grams (g) of soil.  Clay loam soils are relatively high, with a CEC of 20 to 30 meq/100 g, whereas sands are usually very low, often in the range of 1 to 4 meq/100 g.  Including organic matter, like peat, in the sand-based media can raise the CEC, but it will still be much lower than soil.  This difference in CEC between soil and sand has a major impact on the soil’s ability to provide cations to the plant and it changes how the fertility program for the area is conducted.

The pH is another factor that has a big impact on the fertilizer program.  The H in pH stands for hydrogen and pH measurement is basically a measurement of the hydrogen in the soil.   The p stands for “potential”.  While H is not an element that is generally considered in the development of a fertilizer program, H does have some very important ramifications for the plant.  The pH scale ranges from 0 to 14 (Fig. 2).  Everything below 7 is acidic and everything above 7 is alkaline.  Seven is the neutral point.  The pH scale is an inverse scale and the lower the number, the more H is in the system and on the CEC sites.   The scale is also logarithmic and changes by a factor of 10 with each increase of one number on the scale.  To go up from 5 to 6 is a factor of 10 and to go from 5 to 7 is 100.

Figure 2.  The pH scale and the cations that predominate in various pH ranges.

The soil pH has a major effect on the availability of essential elements (Fig. 3) and is a very important piece of information in determining the nutritional needs of the plant.  Iron (Fe), for instance, is usually readily available in the acidic range, but limited in high pH soils.  Iron chlorosis (the lack of chlorophyll), a yellowing of the plant is common on turf grown on high pH soils.  Whereas chlorosis on low pH soils, particularly those with low CEC’s,  is often due to a magnesium (Mg) deficiency.   The wider the line in figure 3, the more available the element to the plant.  While calcium (Ca), potassium (K), and Mg are readily available in high pH soils, they may be limited in acidic soils (pH below 7).

Sands can vary greatly in pH.  Silica based sands can have a low pH, whereas calcareous sands will have a pH of 8.2.  The best starting point in developing a fertility program for a sand-based system is to get a good soil test.  Because of their low CEC’s, sands may also be deficient in some of the key cations for plant growth.  Grass grown on an acidic sand may experience deficiencies of Ca, Mg, and K, whereas sands grown on high pH sands may have problems with Fe, or some of the other micronutrients.  In addition to the pH, a good soil test will show which elements are there in sufficient quantities and which are lacking.

Figure 3.  The effect of pH on nutrient availability to the plant. 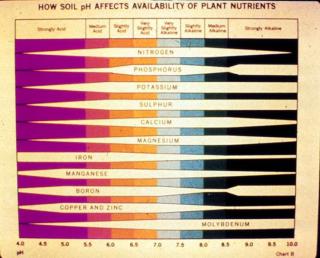 Nitrogen is generally the most important element for sand-based systems.  Sandy soils require more irrigation.  They are also low in organic matter, which is an important source of N in soils.  Nitrogen can easily leach from the rootzone.  Controlled release N sources can help govern the release of N into the soil solution.  Availability of N can also be governed by “spoon-feeding”, the process of applying small amounts of N on a regular basis.  This will usually involve the application of 0.1 to 0.2 lb N/1000 ft2 on a 10 to 14 day interval.  Rates this low will usually require liquid applications with a soluble N source such as urea to provide uniform application.  There may also be a need for periodic applications of granular N sources if the area becomes chorotic.  The plant is very responsive to N applications.  Initial deficiency symptoms include chorosis and slow growth.  A noticeable greenup and increase in growth can take place in as little as 24 to 48 hours after application to a N deficient turf.

Phosphorus can be highly variable in sand-based systems.  It depends on the parent material of the sand.  Silica sands are generally low in P and applications of this element will be necessary.  Some sands have rock phosphate as a part of their parent material and the grass could be grown on it for years without additional P.  The deficiency symptoms of P are a dark green to purple discoloration of the tissue.  There are good soil tests to measure the availability of P and soil tests should be conducted before developing a fertility program.  There are other factors such as cold weather that can cause some types of grass to turn purple.  The best way to determine if that discoloration is a P deficiency is to apply some P to a test area and see if the condition goes away.  If the discoloration continues after P application, the problem is not due to a P deficiency.

Phosphorus is generally a limiting factor in low CEC, sandy media.  Soil tests can provide some information, but the current tests were developed for soil-based systems and they may be misleading.   This element is important in stress tolerance, including wear, heat, and cold.  Visual deficiency symptoms are generally not present unless the deficiency is extreme.  Light application of 0.25 to 0.5 lb K2O/1000 ft2two or three times during the season is usually appropriate.  Avoid the temptation of using too much K.  Potassium is a cation and its overuse can result in saturation of the cation exchange sites at the expense of other essential element (Fig. 4).  This should be avoided and light applications are usually satisfactory.

Figure 4.  Do not overload the cation exchange sites with K+http://www.iaturf.blogspot.com/