Drama at the PGA Championship 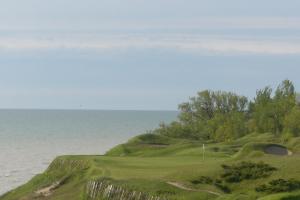 The fourth and final major of the year concluded yesterday with 25-year old Martin Kaymer taking the 92nd PGA Championship at Whistling Straits in a 3-hole playoff. The final round wasn’t without controversy though.

Dustin Johnson who finished in a 3 way tie with Kaymer and Bubba Watson was excluded from the playoff after a ruling on the 72nd hole. Johnson grounded his club in what was deemed to be a bunker before his second shot, leading to a two-stroke penalty.

As the drama unfolded, I was curious as to how the USGA defines a bunker. Their definition is as follows.

A "bunker" is a hazard consisting of a prepared area of ground, often a hollow, from which turf or soil has been removed and replaced with sand or the like.
Grass-covered ground bordering or within a bunker, including a stacked turf face (whether grass-covered or earthen), is not part of the bunker. A wall or lip of the bunker not covered with grass is part of the bunker. The margin of a bunker extends vertically downwards, but not upwards. A ball is in a bunker when it lies in or any part of it touches the bunker.

Yet, we heard all week about the “Waste Bunkers” at Whistling Straights. Are the rules governing these areas different? Another quick search on the USGA homepage and I was able to find this explanation:

Many modern golf courses have areas often referred to as "waste areas" or "waste bunkers." These are typically areas that don't meet the definition of either a water hazard or a bunker . Generally, they are unmaintained natural areas installed by modern-day course architects to add another test for golfers to negotiate (or to reduce maintenance costs), and are simply "through the green." That means the Rules allow you to ground your club and/or take practice swings in these areas. And that can be a good thing.

This is not the first time the “bunkers” at Whistling Straights levied a penalty on a golfer. At the 2004 PGA Championship at Whistling, Stuart Appleby was penalized 4-strokes for a mishap on the 16th hole. Appleby hit a shot outside the gallery ropes into a bunker, which he assumed was out of play, since spectators had been walking through it. Appleby moved a few twigs from the bunker, he drew a two-stroke penalty. Another two-stroke penalty followed when he ground his club in the bunker.

Before this year’s tournament all of the players were made aware of a “Supplementary Rules of Play” sheet that was posted in the locker room. Obviously, Johnson should have read and been aware of the rules and any exceptions to them.

But how fair is that rule? Should the bunkers have been declared waste areas? (They originally were in the '04 PGA but then officials changed their minds before the tourney, leading to a penalty for Stuart Appleby.) The “bunker” which Johnson landed in was unraked and unkept. Plus, spectators were standing in and around the “bunker” as Johnson played his shot. Should it have been considered a bunker or waste area?

What are your thoughts?