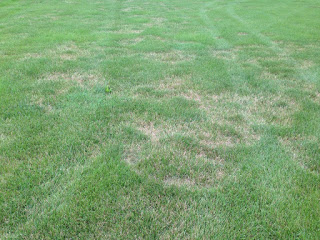 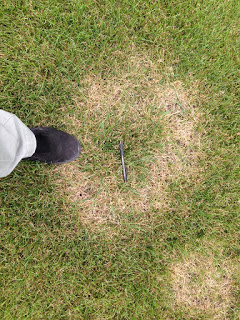 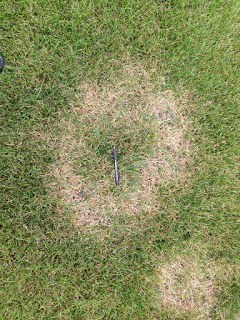 Summer patch, caused by the fungi (Magnaporthe poae), is showing up on Kentucky bluegrass turf at the research station in central Iowa in early July.  I am also getting some calls and pictures from people in the state asking about this problem.

This disease forms an interesting pattern in the turf.  The patches are 8 to 15 inches in diameter.  In early stages, they will have a brown ring around the outside and a green center.  In more advanced outbreaks, the entire area may become blighted.  The symptoms are often referred to as "frog-eyes".  There are other diseases that form frog-eyes, but these generally show up at other times of year.  Summer patch generally begins in early July in central Iowa.  I normally associate it with years that begin wet and then turn hot and dry.  In this case, the area is irrigated.  We have also had a wet spring and this area was not under moisture stress.

Systemic fungicides that are taken up by the plant are the only materials that will control this disease.  It does little good to treat once the symptoms are present. The condition will go away by fall.  The area should be treated with systemic fungicides labeled for Summer Patch the next year before the symptoms develop.  This is of course hard to do and good record keeping is a must for this disease.

Core aeration in the fall can also improve growing conditions for the grass and may reduce the severity of the symptoms.  The pictures above are taken from an area where the disease appear nearly every year.  We leave the area untreated so that we can show the condition at the annual field day.  This years field day is on July 23, 2015.