It is a common phenomenon on the golf course to have green footprints appear in mid summer, with brown grass surrounding the prints.  While this is a common problem on creeping bentgrass on golf course, I also had a couple of questions from people who had this occur on their Kentucky bluegrass lawn this summer.  The problem is mosquito spray that contain a chemical called DEET (N,N-diethyl-meta-toluamide)..  This material is a great mosquito repellent, but is deadly to grass.  The problem occurs when someone stands on the grass and spray their feet to protect themselves from mosquito bites. 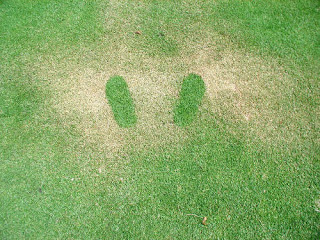 This past summer, undergraduate research associate Zack Olinger, performed a demonstration on this problem for the annual field day in July.  He did this in conjunction with his supervisor at the research station, Dan Strey.

The following is his description of the project:

The objectives of this demonstration were to show effects of commercial spray products on the turf, and the timeframe for recovery following damage. With so many products readily available in today’s market, I decided to try an aerosol bug spray, an all-natural bug spray, and sunscreen. My goal was to demonstrate the effects of direct application of these products on the turf. I used OFF! Deep Woods® (25% DEET), Bug Soother (Lemongrass Oil 0.5%), Coppertone Sport High Performance® 30 SPF Broad Spectrum (Octisalate 5%, Avobenzone 3%, Homosalate 10%, Octocrylene 10%). I set up a demonstration using 2’x2’ plots on Creeping Bentgrass, Agrostis stolonifera. The turf was mowed daily at .140”, the average height of many golf course greens. The application of the products were set-up in order to showcase results at the 2015 ITI Turfgrass Research Field Day on July 23, 2015. The Applications were made on July 9, 16, and 21. Below is a plot plan for the demonstration showing the application timing. Attached is also a record of daily weather and soil information during the course of the trial. I used an old pair of Nike Shoes and set them in the plot that the product was being applied to, then the product was sprayed evenly across the plot at a normal use rate resembling that used by the golfer. The plots were treated on their respective date and then observed for recovery from damage for several weeks.

Table of treatments with dates of application. 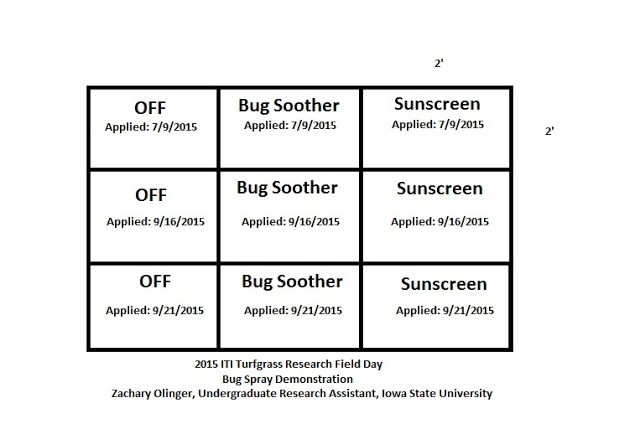 I found that the OFF! Deep Woods Bug Spray caused severe turf damage. The turf immediately shows signs of stress following application. The turf turned a dark purple (resembling the color of wilted grass) and then started to turn brown within 2-3 hours. By 24 hours after application the turf is damaged to the full extent. The turf took approximately 3 weeks to return to its original quality. Some spots in the plots never came back and would need to be reseeded or left to fill back in during the cooler weather of fall.

The Bug Soother showed no adverse effects on the turf.  Immediately after application, the turf showed a shiny appearance that wore off after approximately 1 hour. The turf continued to live with no problems throughout the trial. The Sunscreen showed the same signs as the OFF! Deep Woods Bug Spray following application. The turf resembled the appearance of wilt for 3-4 hours and then started to brown out for 2 days until it reached the point of recovery. The sunscreen took approximately 8-10 days to return to its original quality. With all of the products there was a 98% recovery within 3 weeks.

Most golfers  do not know about this problem.  Posting signs in the pro shop can help.  It may also be a good idea to provide a natural insect repellent at the counter so that they do not have to use the DEET product on the course. 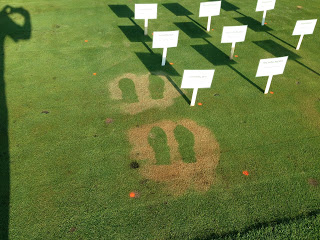 Pictures of damage from DEET product on Field Day, Aug. 23 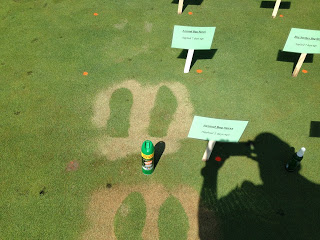 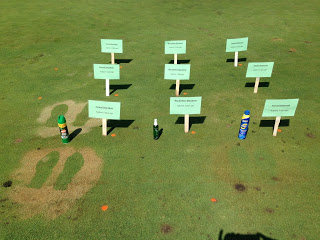 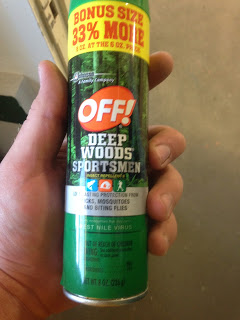 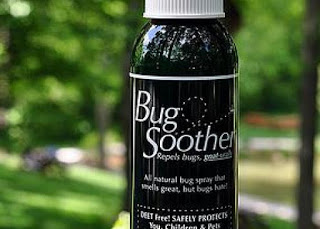