Here is the latest blog by Dr. Donald Lewis, Entomology Extension, at Iowa State.  It is in response to Jim Woods of Woods Lawn Service in New Sharon, Ia., who sent in the picture below. 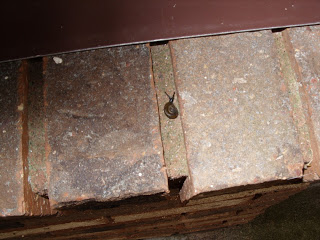 Here are Don's thoughts on the subject:

Snails and Slugs in a Wet Year

A message from alert reader Jim Woods from Woods Lawn Service in New Sharon prompted a review of what are slugs and snails and why are there so many of them this year?

Slugs and snails are animals on a very large branch of the Animal Kingdom family tree called Mollusca.  The best known molluscs are the clams, oysters, squids and octopuses.  The closest relatives of snails are the clams and oysters, called the gastropods.  The name gastropod literally translates from Greek to mean stomach-on-foot.  The large fleshy foot that protrudes from the shell of a snail or oyster and on which they crawl, also contains the mouth opening.

Snails and slugs are very nearly the same thing!  The easy distinction is that slugs are snails without the shell.

The few molluscs and gastropods that have evolved to live on land rather than in the water still require a lot of water to thrive.  They are active at night when humidity is higher and spend the daytime hidden in damp locations such as under mulch, leaf litter and debris on the ground (an exception being cloudy, rainy and humid days).

Snails and slugs do best in damp environments.  That's why slugs are such a pest of hostas because hostas grow in a garden that is shaded and holds the moisture longer.  http://www.ipm.iastate.edu/ipm/hortnews/2009/7-15/slugs.html

Slugs and snails also do well in rainy summers like this one.  During drought years they almost disappear from sight.  Prolonged periods of wet weather, however, have the opposite affect and numbers become noticeable.

Dr. Lewis is responsible for outreach education on insect pest management in horticultural crops, households and structures and is a specialist in the ISU Plant and Insect Diagnostic Clinic.