Here is a post from Dr. Donald Lewis, entomologist at Iowa State University.  In recent weeks, we have both been contacted about Japanes beetles (Popillia japonica) showing up in central Iowa.  Don has found that these are actually False Japanese beetles (Strigoderma arbicola). We do get Japanese beetles here, although last year populations were low. 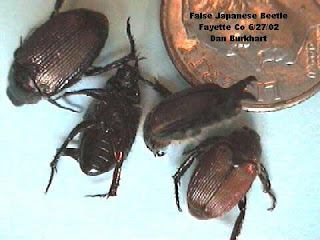 The BugGuide website uses the common name “sand chafer” which matches very well the locations where we must commonly see this beetle in fields, gardens and lawns.  However, the common name “false Japanese beetle” has been used in Iowa for at least the past 50 years!  The False Japanese Beetle is moderately common in the state but varies greatly from year to year.  Others are reporting more than usual this year.

Dr. Lewis is responsible for outreach education on insect pest management in horticultural crops, households and structures and is a specialist in the ISU Plant and Insect Diagnostic Clinic.