Isaac Mertz is a MS student at Iowa State specializing in turfgrass science.  An update on his research appeared in Golf Course Management this month under the heading "Cutting Edge Research".  The abstract from his study that he will present at the American Society of Agronomy meetings in Long Beach, Ca. in a couple of weeks appears below.  Congratulations Isaac.

The full text of the GCM article is at  http://ow.ly/CwLmO.

Tryptophan is one of the 22 essential amino acid and acts as a building block in protein synthesis, as well as a biochemical precursor for serotonin, niacin, and auxin in most organisms. Previous research has shown that applying biosolids boosted with auxin coming from tryptophan may enhance plant defense chemical responses during limited soil moisture conditions.  This occurs through increases in root production as well as endogenous hormone levels that can result in plant growth regulating activity. Tryptophan is produced industrially, which results in a significant amount of byproducts. Tryptophan byproduct (TRP-B) is currently considered a waste product, however, its amino acid and nutrient contents make it an intriguing subject for the use as a growth promoter for turfgrasses. The objective of this research was to determine whether applications of TRP-B improve ‘Penn-A4’ creeping bentgrass (Agrostis stolonifera L.) performance more than applications of pure tryptophan and/or urea. Creeping bentgrass plugs taken from sand-based putting greens at both the Virginia Tech Turfgrass Research Center (Blacksburg, VA) and the Iowa State Horticulture Research Station (Ames, IA) were transplanted into pots and allowed to reestablish in a growth chamber at both respective universities before being treated.  Treatments included TRP-B, urea, and pure tryptophan + urea, and were applied every 14 days at three different rates. Application rates were based on the amount of nitrogen being applied and were 2.5, 12.2, and 24.5 kg N ha-1.  At trial end (42 days), plant parts were harvested and used for analysis. At 24.5 kg N ha-1, TRP-B and pure tryptophan + urea increased root mass by 18.2% and 16.3% respectively compared to urea only. Creeping bentgrass treated with TRP-B can result in increased root production, but the response is rate dependent. 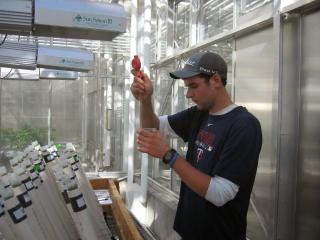 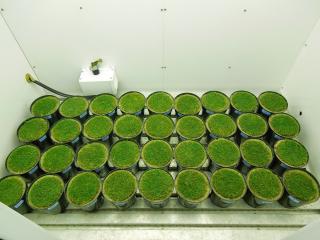