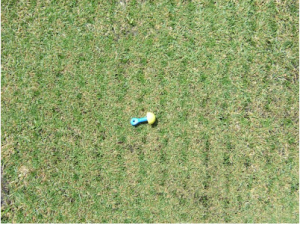 Interseeding poses an interesting dilemma. The main attraction of converting through interseeding is the ability to convert to a new turf without taking the area out of play and facing the resulting economic losses. Research shows that the success of interseeding is related to the level of disruption created and the speed of germination of the interseeded species. As the level of disruption increases, the competition from surrounding plants decreases allowing the seedlings an opportunity to establish. However, the amount of disruption necessary for successful interseeding may not be conducive with a smooth uniform playing surface. Because minimal disruption is needed so as not to disrupt play, superior germination characteristics are needed.

We conducted a germination study at Iowa State with 'Penncross' and 14 improved cultivars of creeping bentgrass. The cultivars ‘L-93’, ‘T-1’, ‘Apha’, ‘Penn A-1’, ‘Penn A-4’, ‘Crystal Bluelinks’, ‘Pennlinks II’, ‘Pencross’, ‘Tyee’, ‘007’, ‘Mackenzie’, ‘SR1150’, ‘Memorial’, ‘Independence’, and ‘Declaration’ were evaluated in this study. Each cultivar was represented by two to four seeds lots from production year 2007. Standard germination tests were conducted according to the rules established by the Association of Official Seed Analysts (AOSA). The objectives of the study where to determine if improved cultivars of creeping bentgrass possess superior germination characteristics compared to 'Penncross' and if there was a relationship between seed weight and germination characteristics.

Significant differences existed between 'Penncross' and the improved bentgrass varieties for germination speed (MGT), germination synchrony (T10-90), and viability (FGP) but not weight (table 1). These results indicate that improved varieties of creeping bentgrass possess greater viability and germinate faster and with greater synchrony compared to ‘Penncross’. Differences between ‘Penncross’ and each of the improved varieties can be viewed in table 2 (significant differences are highlighted in red). ‘T-1’ outperformed ‘Penncross’ in all three parameters. While some of these differences appear small numerically, it is important to remember that these tests were conducted under optimum conditions. The differences would likely be greater under field conditions when the seeds are subject to environmental stresses. 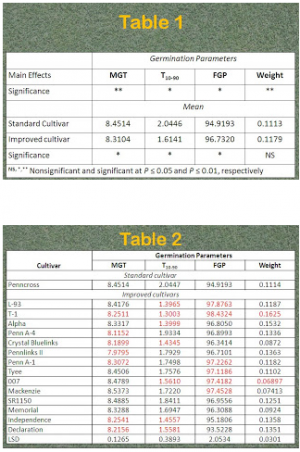 Our study also revealed a significant correlation between seed weight and speed of germination (MGT). Seeds germinated faster as the weight of the seeds increased. This information could be used to predict the germination speed of other cultivars without conducting tedious germination studies. 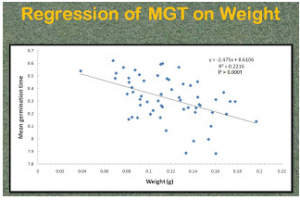 What does it all mean?

This study clearly shows that improved cultivars of creeping bentgrass have superior germination characteristics compared to ‘Penncross’. So is it possible that the success or failure of interseeding could depend on cultivar selection? Past interseeding research supports this very idea. Attempts at interseeding ‘Penncross’ into an established annual bluegrass putting green were largely unsuccessful (Gaussoin et al., 1989). However, in a similar study, researchers were able to establish over 70% ‘L-93’, and ‘Penn A-4’ into an annual bluegrass putting green (Henry et al., 2005). These results could be the explained by the differences in germination characteristics that we observed in our study. Clearly, not all cultivars of creeping bentgrass exhibit similar germination characteristics. And while the success of interseeding will not result from a single practice or strategy, proper cultivar selection will play an integral role as part of an interseeding conversion program.