Here are some surprising pictures from Nick May, General Manager of TRUGREEN in Des Moines.  It is common bermudagrass (Cynodon dactylon).  This would not be a surprise if we were in St. Louis, but is is very unusual for Des Moines.  I have occasionally over the years seen bermuda on steam tunnels or in very protective area, but this is a large patch of bermuda, about 1700 sq. ft., that has taken over the bluegrass in a Des Moines lawn.  This I have not seen in the 33 years that I have been looking at central Iowa lawns.

I asked if the homeowner had seeded it.  Common bermuda can be established from seed.  But they say they have lived there for 5 years and it came in by itself.  Normally it would winter kill if a little did become established, but in our mild winters of the last couple of years, it did not die and it is thriving in the current summer weather.

Because of its stolon system, it can be a real problem in the landscape.  It spreads into everything.  It also has a rhizome system underground.  I have seen it grow under 12 inch landscape barriers when I lived in Colorado.

Hopefully this will not be a trend in central Iowa.  We need a cold winter to kill it.  Chemical methods usually fail.  It is like quackgrass and it just keeps coming back from everything you throw at it.

If any of reading this have seen it in central Iowa, let me know.

Notice the stolon system.  The only other thing with this type of extensive stolon growth that you will find in central Iowa is Buffalograss.  This is clearly not buffalograss. 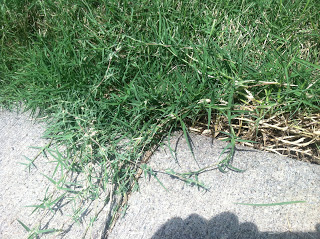 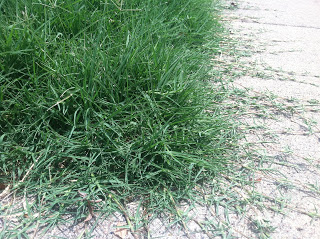 Look at the seedhead.  It is like crabgrass, only the seed stalks form a whorl, they all originate from one place.  Crabgrass is branched. 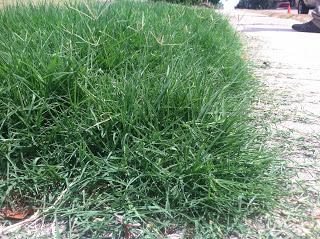 These dry stolons are what you will see this fall.  Bermudagrass will go dormant in September at about the same time as Zoysiagrass.  It will not green up again until early June.  If it winter kills this year, it will not green up at all next spring.  I'm betting that it does come back.

Nick May:  watch it in the spring and send some more pictures if it comes back. 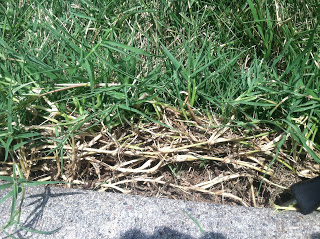