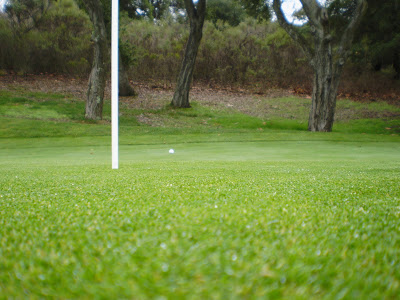 Frenemy – a blend of the words “friend” and “enemy” that refers to an ally who is simultaneously a rival. An example of such would be Dwight Schrute and Jim Halpert in The Office, or two teammates fiercely competing for a starting spot. In a turfgrass sense, Poa annua and I are frenemies.

Here in the Midwest, Poa is an enemy: a weed with poor roots and annoying seedheads. However, it provides an unmatched playing surface in a temperate climate. In fact, you can even be Poa annua’s friend on Facebook.

My golf and turf management background has mainly been in Iowa, so I’ve become familiar with the differences in appearance, playability, and management of an entirely bentgrass green and a heavily Poa infested green in this region. The winter annual tolerates stress just enough to be a problem, but it can't withstand the conditions bentgrass can.  Therefore, it remains a weed.

Turf managers and golfers have a much different experience in a climate that Poa is better suited in. I’ll never forget my first time playing on an entirely Poa green in Northern California. The turf was so finely textured it was difficult to see individual leaf blades. In addition, the greens rolled incredibly fast yet surprisingly true.

That experience led me back to the Pacific Coast for a summer internship where I gained a new perspective of Poa. I was amazed to see the greens mowed at less than 0.09 inches, aggressively verticut biweekly, dried out for weekend play, and yet the turf bounced back quickly. If Poa was improved to tolerate adverse conditions and could be utilized on golf courses everywhere, superintendents would no longer need to fight it as a weed. This may be possible considering the plant's great ability to adapt.

Dr. Don White at the University Minnesota has research reports on Poa annua dating back to 1985 and has a breeding program there. Dr. David Huff at Penn State University has also been breeding annual bluegrass since 1994. Even so, a uniform supply with traits that increase stress tolerance is still not available.

Breeders have a difficult task in commercially producing annual bluegrass. Seeds are difficult to harvest because Poa annua has a plastic phenotype (one that can change). The desirable grass plant at low mowing heights produces an undesirable seed when the plant grows tall enough to be harvested. Propagating the grass from seed may not be realistic for another reason: Poa established from seed often sprouts seedheads at green height, which requires growth regulator to inhibit them from forming. Vegetative propagation of the turf is also difficult.

Imagine for a minute that Poa has successfully been bred to be used commercially for golf course greens. The limited rooting depth issue could possibly be alleviated with a shallower rootzone, allowing the water table to perch with less irrigation. This and other cultural practices can only be researched and implemented if Poa can be commercially produced. Somewhere down the line, genetic resistance to Anthracnose or tolerance to cold and heat may even be developed.

Superintendents will be managing Poa this year, but they will still be treating it as a weed. There is, however, validation in breeding it. Most people consider annual bluegrass an enemy. I, on the other hand, have an optimistic view of the plant.  This leaves Poa annua and I as frenemies.