White Grubs in the Lawn 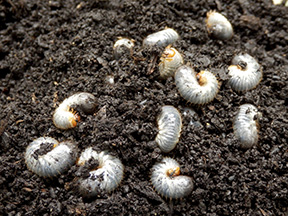 Spring is here and the grass looks as good as it is going to look all summer.  Since you want to keep it that way, you have probably been considering treating for white grubs, either because you have experienced white grub damage in the past, or your friends and neighbors have complained about white grub damage, or a lawn care salesperson's pitch got you a little excited if not a little scared.  Put the insecticide down and step away from the sprayer.  We need to talk.

The white grubs that routinely damage lawns in Iowa are called annual white grubs.  These root-eating, underground June beetle larvae have one generation per year and take one year to complete their life cycle of egg, larva, pupa and adult.  The adult beetles of our annual white grubs are specific kinds of June beetles called masked chafers.  They are tan or straw brown in color and as the name implies, they have a black stripe across the eyes and face.  The masked chafers begin flying in late June and lay eggs in the turf during July.

The eggs hatch in 2 to 3 weeks and tiny white grub larvae begin to eat the grass roots.  The grubs grow rapidly and are fully grown at 1 inch in length by late August or September.  White grubs are pudgy, off-white except for the brown head, and typically bent in the shape of the letter "C."  Feeding by the grubs prunes the roots from the plants and causes the grass to wilt and fade.  Extreme feeding by populations of 10 or more annual white grubs per square foot will cause the grass to die.  White grubs move several inches deep in the soil to spend the winter.  The move back near the surface in the spring time but cause little additional damage as they wait to pupate in June, emerge as adults and start the cycle over.

There are 3 basic approaches to grub management in the home lawn, depending on your tolerance for damage, comfort with pesticides and willingness to spend the cash.  White grub insecticide treatments are not only expensive but hard to justify from an environmental standpoint.

In places such as golf courses and some lawns, the risk of any white grub damage is so intolerable that preventive insecticides are applied to every part of the lawn, every year.  When this approach is chosen the proper time of application is between early June and August 15.  A compromise modification of the Golf-Course Approach is to treat only those areas that have been previously damaged.  Beetles tend to return to the same areas in successive years, so it is logical to treat the areas where you had grubs last year or the year before.

The second approach is the wait-and-see Approach.  Watch the lawn carefully for early signs of damage (wilting, turning brown) during August to early September when grubs could be feeding.  Apply a curative insecticide only where needed and when needed.  The risk is that you might still lose some sod, especially if summer rainfall or irrigation keeps the grass growing and vigorous through July and August.  Damage symptoms may not appear until after it is too late for effective treatment (late September through late October).  Unfortunately, raccoons and skunks are much better at locating grub populations than we are and the first symptom of a grub problem in your turf is likely to be that your lawn was "plowed" by varmints overnight.

The final alternative is to do nothing.  This may be easier to do if you count up how many years you DID NOT have grub damage.  Divide the cost of replaced sod by that number of years.  If the yearly-averaged cost is less than the price of insecticide, do nothing and take your lumps in the occasional year when damage occurs.  This approach is much easier to follow if you believe "it's just grass, anyway."

White grub management decisions are difficult and frustrating.  Many homeowners are frightened into applying grub controls because of advertisements on TV, in plant centers, or because of horror stories they have heard about grub damage.  Studies at Cornell University have shown that over 70 percent of all grub control treatments were applied needlessly because there were no grubs in the lawn.

If you do choose to apply insecticides, read the application directions carefully before buying.  Some grub treatments are preventive and most be applied before mid-August.  Others are curative and work only if the grubs are present.  Know which you are getting before you buy.  Apply carefully according to label directions and thoroughly water in the insecticide.  Watering accomplishes two things: it moves the insecticide into the soil where the grubs reside, and it removes the active ingredient from the surface and greatly reduces the hazard of insecticide exposure to people, pets and wildlife walking on treated turf.  Irrigate the treated area with at least 1/2-inch of water.