What Story is your Land Telling?

We can learn about our land in a variety of ways. Local history books report on the native cultures that hunted, gathered, farmed and traded there. General Land Office surveys from the 19th century record the locations of natural features and early settlements. Historical aerial photographs provide high-resolution snapshots through time dating back to the Hoover Administration. Stories of past hunts and or family memories in old fields and forests are passed down through generations. All reflecting a transfer of information through shared stories or archival records.

An alternative, simple, and reliable method remains perhaps underutilized and is accessible to anyone with trained eyes: reading the stories plainly displayed on the face of the land and trees. Understanding the stories hidden in the elements of our landscapes can transform a walk in the woods or a country drive into a history lesson on the land and the stories hidden in its plants and soils. Stories otherwise hidden among obscure documents or lost with passing generations.

Here, I’ve shared a few of the simplest ways of reading the land to start to paint a picture of its recent history. Many other clues exist that I did not have time to review, such as reading the geologic history of land forms and signatures of glaciers that once covered Iowa or by reading the information contained in profiles of soil under our feet. A keen eye for details and a curiosity for understanding all the features of our lands can enrich our experience on the land and inform our strategies for managing its rich resources for future generations.

The slow growth of a tree toward sun captures the history of sun and shade around it throughout its life.  Trees grown in a close association with neighboring trees competing for sunlight grow tall and narrow. Those grown in the open, for example in a savannah or pasture, have broad and low branching patterns evident even after other trees have grown in around it. Foresters call these large, open grown trees “wolf trees” and know them to be a sure sign that the surrounding forest is younger, likely regenerating following a cessation of livestock grazing around the large, open grown wolf trees. These large open grown trees rarely have marketable timber value, but they can provide excellent habitat for wildlife. These trees often produce large crops of acorns, important as food for wildlife, and as the seed source for future trees grown in a closed canopy and more likely to produce marketable timber. Some landowners use wolf trees as the building blocks of oak-savannah restoration, which aims to reconstruct an ecosystem that once covered around 10% of Iowa and today is one of the most imperiled ecosystems in the world.

Almost all of the forests in Iowa are what foresters call second or third growth, indicating the number of generations trees have been removed and then regrown since European settlement. Functionally all the forests in Iowa have been cut over at least once, either to clear the land for farming or to harvest the trees (and often both).  Comparing the size of trees in a forest can thus reveal information about how the forest came to be and what past land uses have occurred in the stand. The size, and thus apparent age, of the trees in the canopy of the forest are a key clue. The canopy is whatever the highest point of the forest is that absorbs the majority of the sunlight, potentially ranging from a young stand of trees only a few feet high to a mature stand approaching 100 feet.  If the average diameter of canopy trees of similar species is approximately the same size, you have what foresters call an even-aged stand of trees, suggesting the forest is growing from either a complete harvest where all trees were removed, or from a field or pasture that was retired (and perhaps planted or simply fallowed).  The alternative scenario is an uneven aged stand, where canopy dominant trees reflect a range of ages, suggesting the stand is either older, and thus formerly dominant trees have died and been replaced, or the stand was selectively harvested at some point.

Hardwood trees, like oaks, hickories, and walnuts, unlike evergreen trees like pines, resprout after being cut down. Foresters take advantage of this behavior when harvesting trees or conducting timber stand improvement, allowing established root systems to feed new growth of resprouting trees.  Many years following being cut off, after the old stumps would have rotted away and new trees grown back in their place, we can observe evidence of past cutting from the remnant evidence of resprouts: low forking in trees. Many of these trees still have valuable timber products or capacity to produce nuts and seeds for wildlife. The best split trees in a stand are those with a saddle-like joint where the two stems combine (as pictured) rather than those with a “V” shaped joint that can be frail. Any evidence of low-split trunks in the stand is a good sign that the woods was harvested the year before the modern split-trunk trees began growing.

Elevated Soil and Vegetation in Fencerows

Fencerows that grow up with grasses, shrubs, and flowers were once a common element in Iowa’s agricultural landscapes during a time when implements were pulled with livestock or while small-scale livestock operations were more common. Today, many fencerows have been removed to allow for larger equipment to access fields and reflecting a shift towards more row crop production on Iowa farms. However, the evidence of old fencerows can still be visible in many fields, revealing where old field borders existed and perhaps where wildlife, like bobwhite quail, that once depended on fencerows thrived on the farm. Lines through fields where fencerows once stood are evident because of the tendency for two different erosion pathways to play out in these areas, raising the profile of the soil under the fencerow vegetation. First, vegetation in fencerows would have established roots to hold the underlying soil in place year round, while adjacent crop fields would be tilled annually and thus exposed to wind and water-associated erosion throughout the year. At the same time, standing vegetation in fencerows was also functioning as a natural wind and snow break, capturing blowing soil particles in the air from adjacent fields and leading to excess accumulation of sediments along the fencerow. These two processes, erosion in surrounding fields and deposition of sediments into the fencerow vegetation, directly worked to raise the elevation of fencerows in many fields. Thus, when the fence and associated vegetation are removed, a different type of soil remains, at a higher plain than the adjoining fields.  Through time these high spots are removed through tillage and erosion, but for many years they remain evident to the trained eye in the field.

Just as elevated areas in fencerows indicate sediment deposition and loss from adjacent fields, gullies are an indication of more extensive erosion on properties resulting from changes in water flows and vegetation to hold back soils. Iowa’s lands were once nearly completely covered by aged stands of native grasses and timber with deep and diverse root systems. These root systems are what developed the soils on which our economy today is built and also served to absorb rain water and prevent soils from washing away. In many ways, Iowa’s land was once a giant sponge, allowing rain waters to infiltrate to ground water or be taken up by plants. Changes in the land towards shallower-rooted crops and turf grass or invasion of woodlands by invasive exotic species has changed the way our lands are covered in the last two centuries and resulted in substantial new surface erosion, including formation of gullies.  Many of our modern forests or pastures occur on ground that was once cropped but retired because the ground was too steep or too eroded to farm. Modern conservation efforts are important to prevent increased development of gullies. 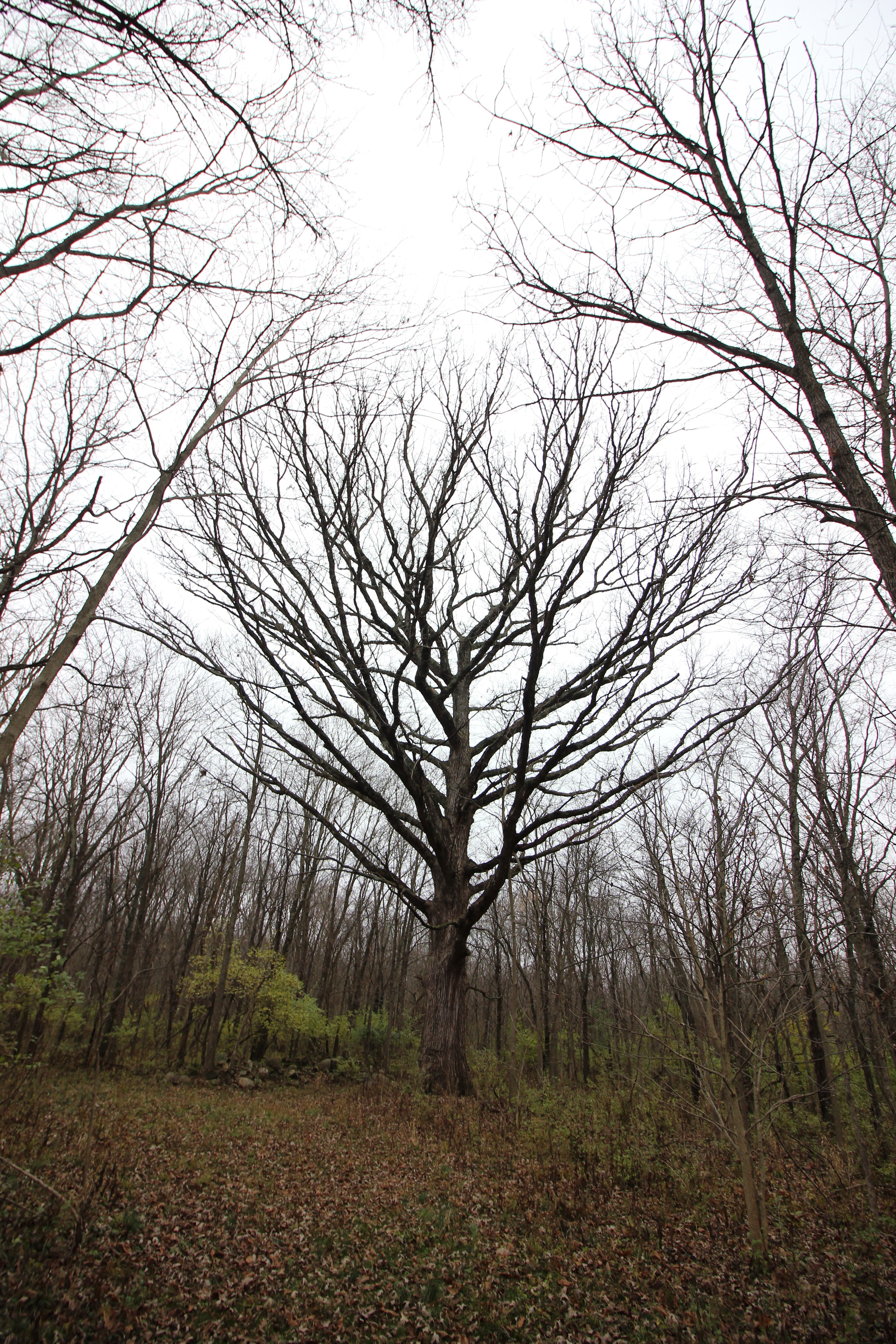 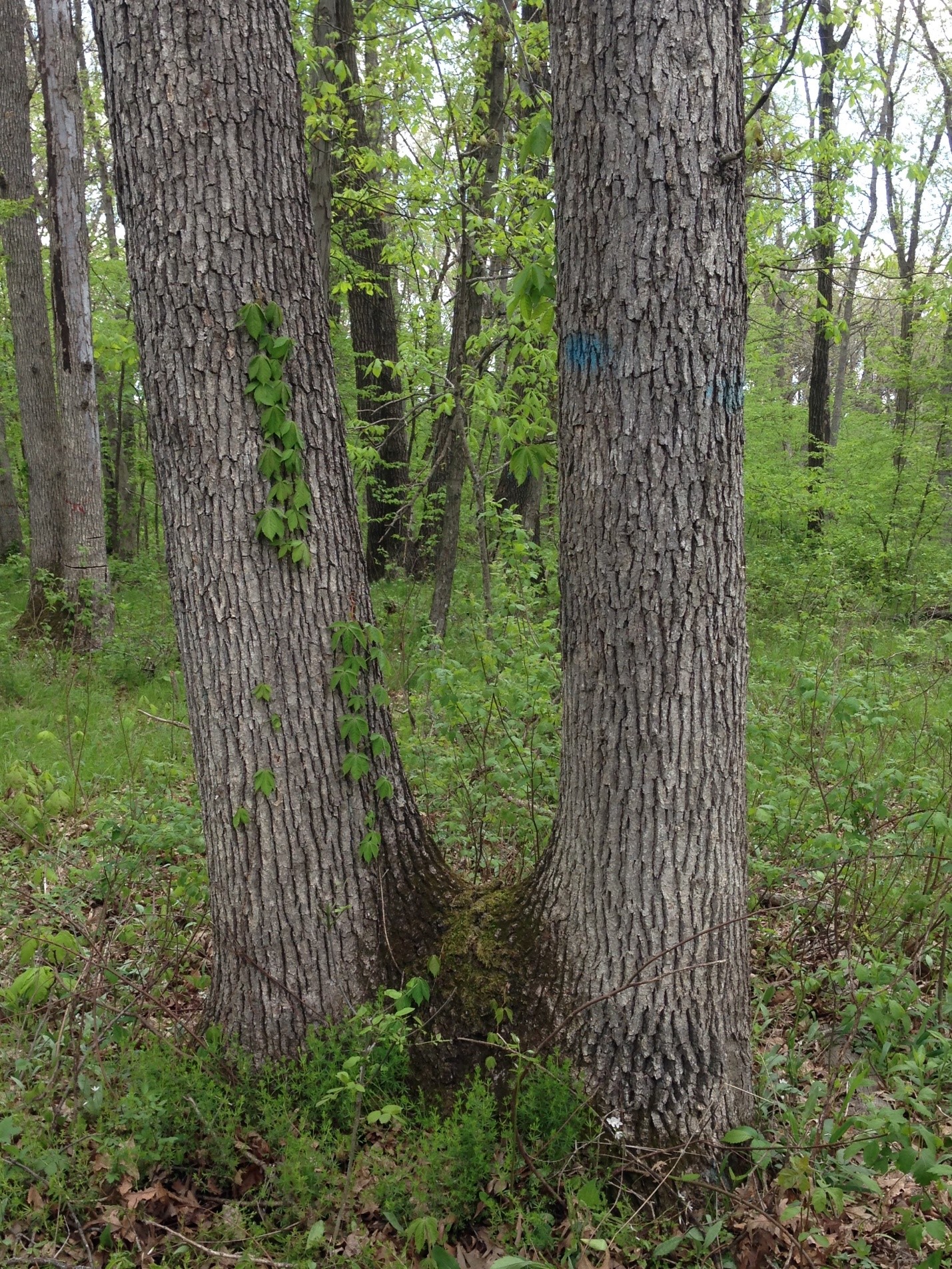 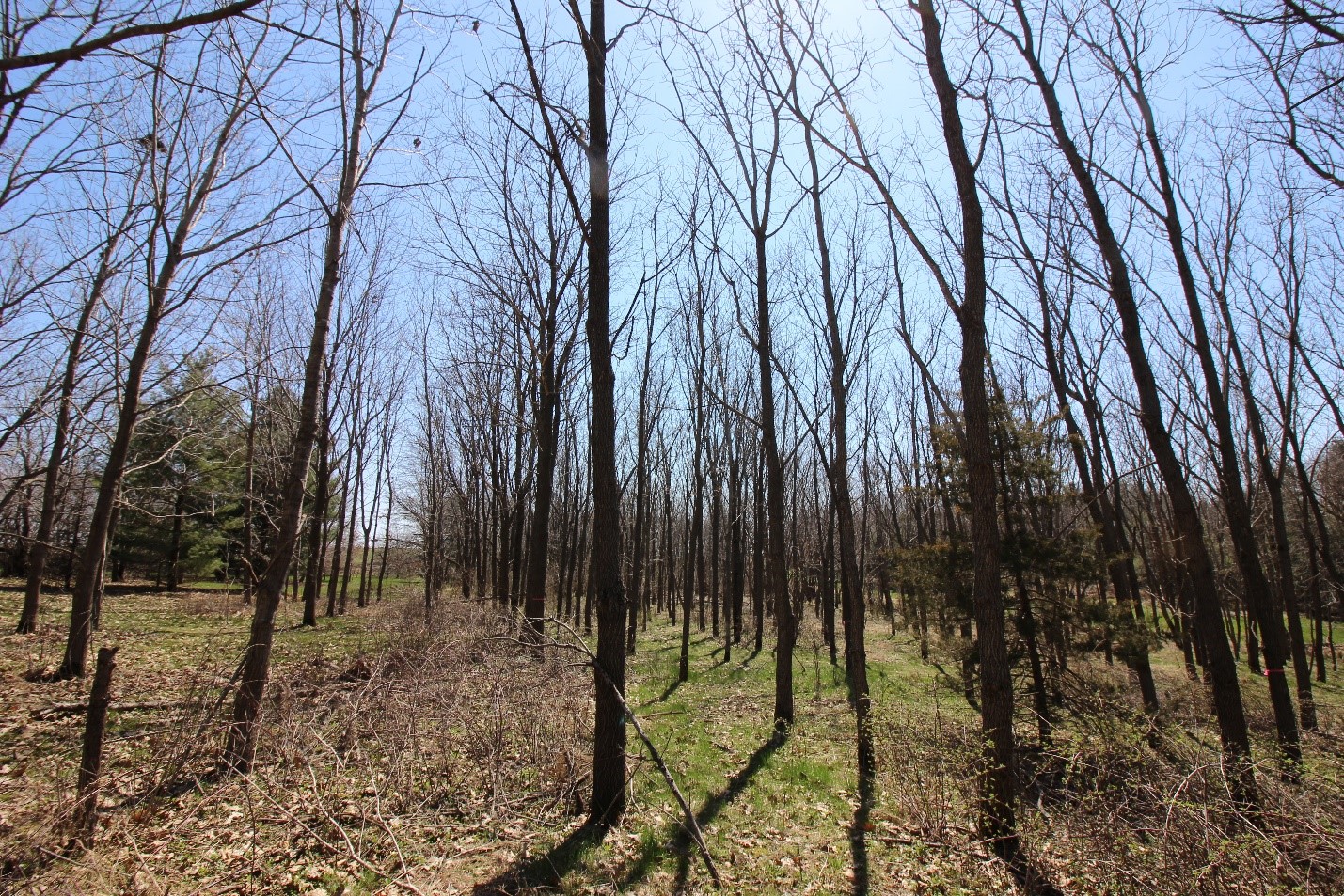 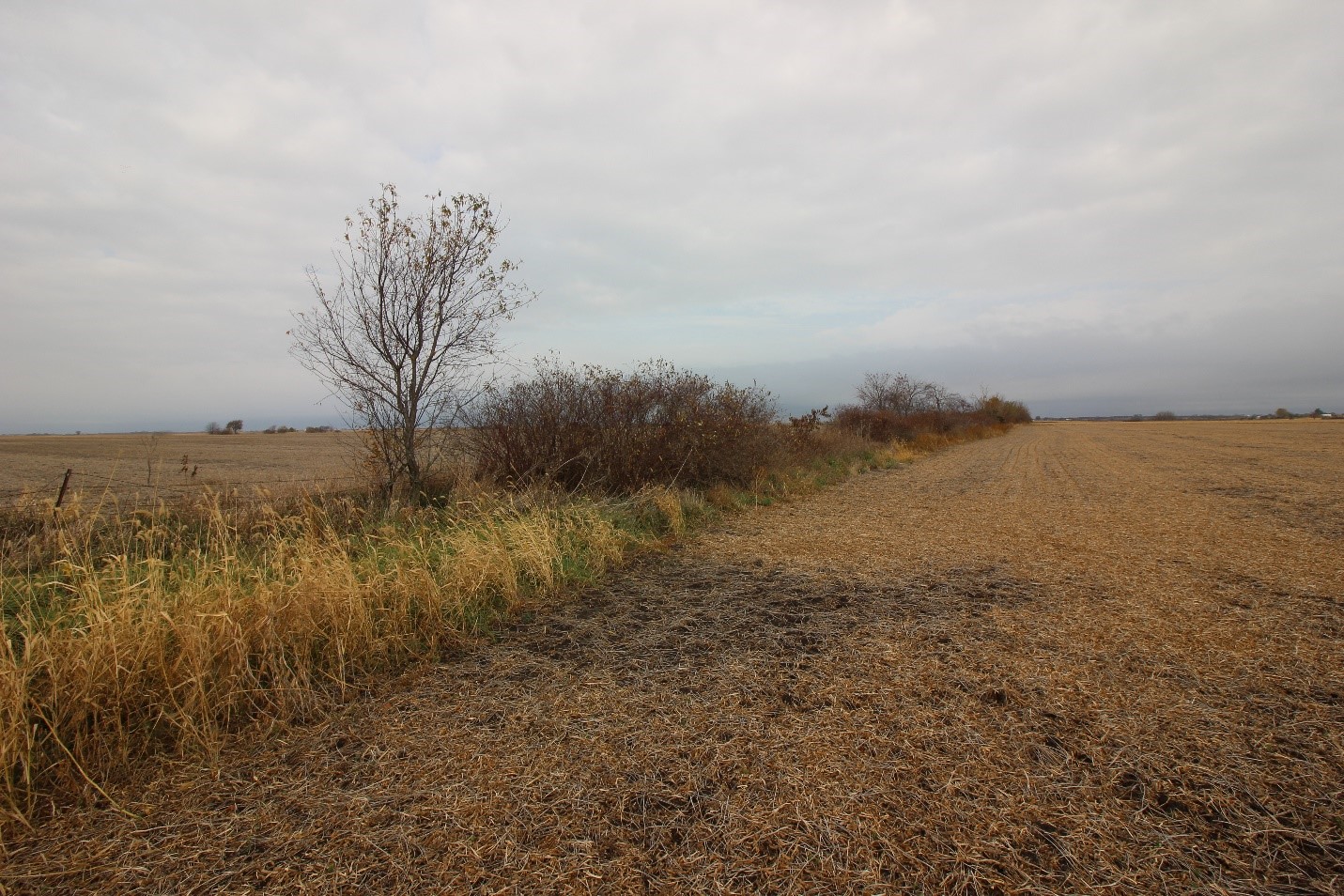 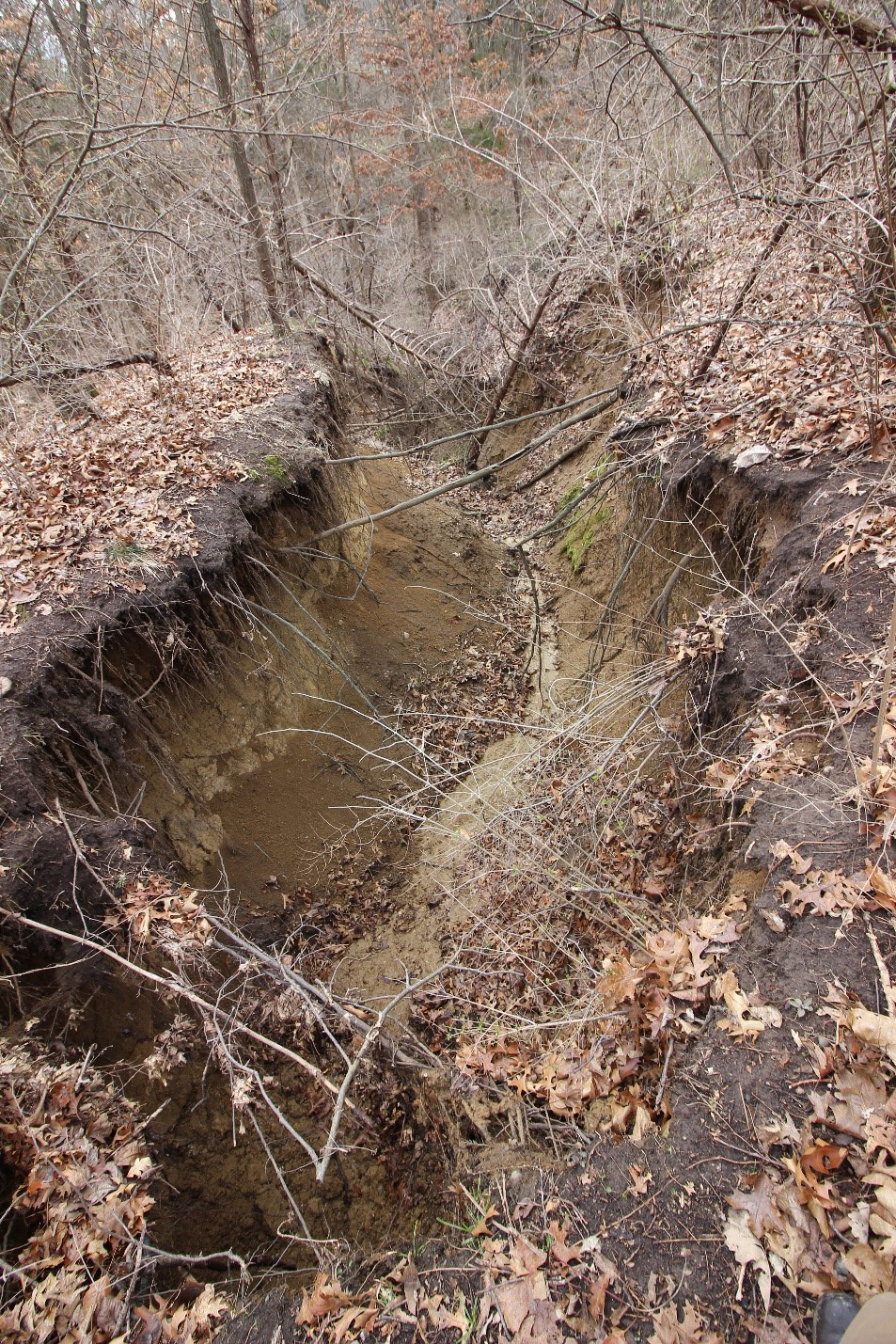