The striped cucumber beetle can overwinter in Iowa in wooded areas and fence rows near crop fields, as well as dense plant litter in the field. Adults emerge from overwintering habitat once daily high temperatures average near 65°F or 18°C. They will feed on alternate hosts like hawthorn and dandelion until cucurbit crops are planted. Once the beetles have moved into a cucurbit field, adults mate. Females lay their eggs in the soil near the base of the cucurbit plants which hatch in about a week. Larvae feed on roots and lower stems of the plants for 2-4 weeks and then pupate in the soil. The pupal stage takes about a week followed by emergence of a new generation of adults. These adults will repeat the reproductive cycle; there are usually 1-2 generations of striped cucumber beetle during the growing season in Iowa. 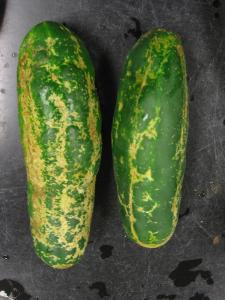 Crops affected are cucumber, muskmelon, squash, and pumpkin. Watermelon are less attractive to the striped cucumber beetle. Early in the season, feeding by larvae can stunt and even kill seedlings and small transplants. It is important to quickly identify signs of feeding on small plants because high populations can completely defoliate or girdle the plant. Girdling is damaging the outer layers of tissue around the whole circumference of the stem severing the flow of water and nutrients between the roots and the leaves. Adult beetles feed mostly on leaves but will feed on stems if populations become too high. Once plants have established and begin to mature, they can survive high levels of defoliation, but this still isn’t acceptable due to the transmission of bacterial wilt through feeding. Beetles will move to feeding on flowers and pollen once the plants have reached the reproductive stage. This doesn’t usually affect yield, but at high populations, beetles can cause cosmetic damage to fruits which can impact the marketability of produce. 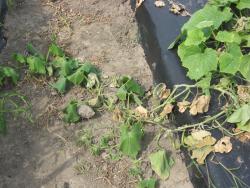 Striped cucumber beetles can transmit bacterial wilt and move it between and around fields. Infection occurs when the beetles feed on the plants and leave contaminated feces in the wounds. From there, the bacteria enters the plant and moves through the vascular system of the plant where it begins to reproduce. Plants begin to show symptoms of bacterial wilt within one week following infection. Once the plants are infected, they will not recover. They may appear to recover overnight for a few days, but the plants will eventually die. Cucumber and muskmelon are most susceptible to bacterial wilt; squash and pumpkin can be infected but will only show mild symptoms.

When looking for striped cucumber beetles, it is important to remember that adult beetles will escape the heat, as well as predators, by hiding in the soil during the hottest part of the day. Plants should be checked for beetles weekly until the first beetle is found followed by frequent monitoring to assess the population increase and keep an eye out for wilting. When looking for bacteria wilt, identify any plants with wilted leaves. If leaves are wilted, remove the leaf with some stem attached. Cut the stem into two pieces and hold the pieces together for about 10 seconds, then slowly pull them apart. If there is a stringy, white substance (like spider silk) connecting the two stem pieces, this is indicative of bacteria. Another quick test is to place the cut end of the stem into a glass of water and watch for a whitish cloud at the end of the stem. This is another indicator of the presence of bacteria. These diagnostic techniques do not work if the plant is already dead.

Overwintering of cucumber beetles can be prevented by removing habitat in the field such as weeds and other plant residue. Row covers can be used to reduce the chances of striped cucumber beetle infesting the cucurbit crop. Row covers must be placed over rows when plants are about 6 inches or 15 cm tall and must be secured carefully to ensure that there are no small gaps where beetles can enter. Once plants begin to produce buds and flower, row covers should be removed to facilitate pollination. Row cover removal is typically followed by insecticide sprays.

Trap crops are most effective when planted about two weeks prior to planting the main crop because the striped cucumber beetle prefers more mature plants. The trap crop must be attractive to the striped cucumber beetle and needs to be 2-5% of the total acreage. Trap crops can be located around field edges for ease of insect treatment since this practice concentrates the beetles in a smaller area. It is extremely important to keep up with sprays on the trap crops otherwise the beetles could move on to the main crop in large numbers.

Insecticide can be used to manage striped cucumber beetle; however, it is important to pay attention to pollinator precautions that can be found on the label, including time of application. It is usually recommended to spray an insecticide before 8 am or after 6 pm because this is when pollinators are less active. At the time of planting, a systemic insecticide can be applied which can protect the seedlings for 2-3 weeks. This can be followed with regular scouting and timely application of contact insecticides. The 2019 Midwest Vegetable Production Guide for Commercial Growers has a full list of insecticides labeled for use on cucurbit crops, effective against striped cucumber beetle, and recommended for use in Midwestern states, including Iowa. The pdf version of guide can be found at: https://ag.purdue.edu/btny/midwest-vegetable-guide/Pages/default.aspx. Paper copies can be ordered from ISU Extension Store at: https://store.extension.iastate.edu/product/1774.

Kaolin clay products, such as Surround®, can be used in organic crop production to deter beetles from infesting and feeding on plants. Removal of plants suspected or confirmed as infected with bacterial wilt is important to slow the spread of the bacteria through your field.