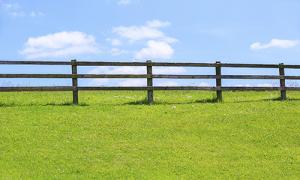 We often receive questions at CALT about Iowa fence law and the obligations it imposes on landowners. The Iowa Supreme Court has noted that “Iowa fencing statutes date from our earliest times, even predating the Iowa Code of 1851.” Although the law is long-standing, property owners are sometimes surprised by the obligations imposed. This article provides a brief overview of Iowa Code § 359A. Although fences located fully within the boundaries of a city are subject to municipal law, it is important to note that Iowa fence law applies whether or not farming is conducted on the land.

In general, Iowa landowners are not required to maintain a partition fence to separate their parcels from other owners. If one adjoining landowner, however, chooses to erect a partition fence, he or she may compel the neighbor to contribute to one-half of the cost of the construction and maintenance of that fence. This is true even if the person requesting the fence is the only party with livestock.

Non-livestock owners have challenged the constitutionality of this rule, arguing that they should not have to contribute to the cost of a fence designed only to keep their neighbor’s livestock in. The Iowa Supreme Court, however, has found the law constitutional. The Court reasoned that a law may serve the public purpose even if it benefits certain individuals more than others. The Court also found that landowners who do not own livestock do derive some benefits from a fence, including increased privacy and freedom from unwanted intrusion by the neighbor’s livestock.

To compel a neighbor to contribute to the cost of a fence, a landowner must send the neighbor a written request. The partition fence is to be built on the property line, “partly on one side” of the property line and “partly on the other.” Both parties have the right to maintain the fence as if it were wholly on his or her property.

When one party initiates a request for a partition fence, the parties generally agree upon the best way to erect it. Some choose to follow the right-hand rule, meaning that each party is responsible to build and maintain that portion of the fence to their right of the midpoint. Landowners, however, can agree to any arrangement they choose for erection and maintenance of the partition fence. A fence agreement is enforceable in court if the parties file with the county recorder a written agreement, signed and acknowledged by all owners.

If the parties cannot agree as to their obligations under the Iowa fence law, they may contact “fence viewers” to settle the dispute. The fence viewers are typically the trustees of the township in which the property is located. Either landowner may initiate a decision from the fence viewers by sending them a written request. The trustees then provide the opposite party or parties five days’ written notice, setting a time and a place to meet and “hear” the controversy. After the meeting, the fence viewers issue a written order allocating responsibility for the fence equally between the neighboring landowners. This order is binding, but either party may appeal the decision to the district court.

It is important to note that fence viewers only have the power to decide disputes regarding a landowner’s obligations to construct or maintain a fence under Iowa law. They cannot settle boundary disputes. A party wishing to settle a boundary dispute typically files an action to quiet title in the district court of the county where the land is located.

What is a Lawful Fence?

The statute details six categories of fences that qualify as a “lawful fence” in Iowa. These include:

If landowners desires a “tight” fence, which is better suited to keep in sheep or hogs, they must make their portion of the fence tight. The adjoining landowners must then do the same. A “tight” fence is defined as follows:

Carl Sandburg once wrote, “Love your neighbor as yourself, but don’t take down the fence.” Iowa law supports that sentiment. The Iowa Supreme Court has stated, “Shared responsibility for partition fences minimizes conflict among neighbors. The fencing statute does not merely benefit livestock owners.  It serves the broader public good by mediating boundary, fence and trespass disputes.” For a more detailed review of Iowa fence law, please see the article, Iowa Fence Law, on the CALT website.