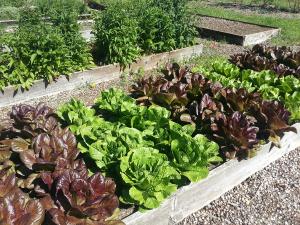 Are you planning on building or modifying a raised vegetable garden or flowerbed? Treated lumber is one type of framing material that you can use in the landscape project; however, you should carefully consider the following information before heading out to purchase your construction materials.

The benefits of using preserved wood for landscaping projects include: extending the useful life of the wood; protecting the wood from insects, fungi and other wood-destroying organisms; reducing the lumber cost compared to other landscaping materials; and reducing the demand for limited forest products, thus conserving a renewable natural resource.

Chromated copper arsenate – CCA. First used in India in 1933, this chemical mixture was the primary wood treatment material for in the United States from 1970 to the early 2000s. CCA is a water-borne preservative. Copper salts in CCA are fungicides and arsenic acts as an insecticide and as a fungicide for copper-resistant fungi.

A growing concern about the possibility of arsenic and chromium leaching out of the CCA-treated wood prompted researchers to take an in-depth look at the situation. The results indicated that CCA-treated wood should not be used for residential projects (decks, furniture, playground structures, and raised beds). Why? Rainfall and solar radiation increased arsenic leaching from the wood. Acidic soils and sandy soils also were more likely to leach the heavy metals from treated wood compared to alkaline soils and clay soils. And, certain plants grown in raised beds constructed with CCA-treated wood accumulated arsenic (basil, beets, beans, lettuce, tomatoes, and zucchini) or chromium (beets, cabbage, cauliflower, kale, leek, onions, and radishes).

Effective December 31, 2003, CCA manufacturers voluntarily canceled residential uses of CCA, and wood products treated with CCA are, therefore, no longer used in most residential settings. EPA has classified chromated arsenicals as restricted use products and can only be used by certified pesticide applicators.

Creosote. Creosote was first patented for wood preservation in the 1930s.  A byproduct of the production of coke from coal for use in the steel industry, this preservative is actually a mixture of 200-400 different compounds. Although this material is effective against fungi, insects, and most marine borers, its primary drawbacks include: an objectionable odor; the oily texture of the treated wood surface that can ruin clothing and footwear; sun sensitivity for workers in contact with both the chemicals and treated wood; a strong suspicion that some of the chemical components are carcinogenic; the toxicity to plants growing nearby; and the inability to finish the wood (saw, sand, and paint).

Creosote is a restricted use pesticide that is primarily used to treat railroad cross ties, utility poles, marine structures (bulkheads, pilings, docks and seawalls), and some bridge timbers. No interior uses are permitted, nor can treated wood be used if it will contact food, feed, or drinking water.

Pentachlorophenol – Penta. This chemical was developed in the 1930s and registered as a pesticide December 1, 1950. It an oil-based preservative that is widely used for utility poles, fence posts, bridge timbers, foundation piling, and glue-laminated timbers. Penta is toxic to insects and fungi, but is not effective against marine borers.  Prior to 1987, it was also labeled as a defoliant, herbicide, moss killer, and disinfectant.

Unfortunately, Penta is a potent biocide with a negative toxicity profile and older manufacturing processes contaminated this wood preservative with highly toxic dioxins. Direct contact with Penta-treated wood can cause human skin irritation, as well as plant damage or death when grown in proximity to the wood. Penta is now classified as a restricted use pesticide and is prohibited from treating wood for any interior uses.

Several newer materials are available for treating wood destined for use in residential settings. These include ACQ, CA, copper-HDO, and copper naphthenate.

Alkaline copper quaternary – ACQ.  This wood preservative has been available since the 1990s but its use increased after CCA was removed from the market. Today, it is the most widely used wood preservative for residential applications. ACQ is both a fungicide and an insecticide. Water-based preservatives like ACQ leave a dry, paintable surface.

ACQ has relatively low risks, based on its components of copper oxide and quaternary ammonium compounds. Research (wipe testing) was conducted to determine the amount of chemical a person could contact dermally and then put in their mouth. Results showed that ACQ-treated wood is essentially non-toxic by normal dermal and oral exposures. Another study showed that copper did leach out of treated railroad ties following destructive sampling (cutting or grinding), but this research was done to determine if the ties would constitute a hazard when disposed.

Copper azole – CA. Copper azole is a water-based wood preservative that prevents fungal decay and insect attack; it is a fungicide and insecticide. It is widely used throughout the United States and Canada. Type A contains copper, boric acid, and tebuconazole, while Type B only contains copper and tebuconazole. CA is a water-based preservative that can be cleaned and painted.

One 2014 study found that copper did migrate from copper azole treated wood into the soil immediately adjacent to the planter sides. Copper levels were not higher in roots or tubers of radishes, carrots or potatoes compared to beds constructed from untreated wood. Copper levels, however, were elevated in carrot foliage, which is not normally consumed. Another 2014 study found that exposure to copper that was released from the surface of CA treated wood could result in an acute toxic exposure for children less than 8 years old IF the child ingested most of the copper residue on her/his hands and feet; the copper would not be toxic dermally.

Copper azole is registered for treatment of millwork, shingles and shakes, siding, plywood, structural lumber, fence posts, building and utility poles, land and freshwater piling, composites, and other wood products that are used in above-ground, ground contact and fresh water as well as in salt water splash (marine) decking applications.

Copper-HDO. Copper-HDO was first registered in 2005 an outdoor wood preservative composed of copper and N-cyclohexyl-diazeniumdioxide (HDO). This material is not likely to move through soils and contaminate groundwater. Copper-HDO is used to pressure-treat wood that will be used as lumber, millwork, decking, rails, spindles, framing, sill plates, gazebos, fencing, and posts. This preservative is highly toxic to aquatic organisms, so it is not allowed in aquatic areas; it is also not intended for use in the packaging of food or feed, or in the construction of beehives.

Copper Naphthenate. Copper naphthenate was first developed in the late 1800s but was registered with the U.S. EPA in 1951. It is a Penta replacement product. Naphthenic acids are derived from certain petroleum sources and can be reacted with copper to produce a copper soap. Copper naphthenate is effective against fungi and insects, but not marine borers. Copper naphthenate is used to brush, dip, spray, and pressure treat wood that will be used in ground contact, water contact, and above ground such as utility poles, docks, posts, piers, fences, and landscape timbers.

All the new wood preservatives utilize copper as an active ingredient. Copper is not a stranger to our lives: it is found in the soil, water, air, and in our food. Copper is an essential element for all living organisms. But exposure to higher copper levels can be harmful. Long-term exposure to high copper levels can result in irritation of the nasal and mucous layers, headaches, dizziness, nausea, and diarrhea.

Drinking water should not contain more than 1.3 milligrams per liter. The recommended dietary allowances of copper are:

It is noteworthy that the copper residues found through research in soils of raised beds from treated lumber were 10 to 100 times lower than considered toxic to humans.

Let's wrap up with some recommendations about the use of treated lumber in landscape projects. Even if you could find them, it is best to avoid CCA-, creosote- and Penta-treated lumber. When using the newer pressure treated woods, consider using a heavy plastic (low-density polyethylene or high-density polyethylene) liner or a polypropylene fabric liner between the sealed treated wood and the garden soil. Care must be exercised to avoid puncturing the liner during gardening activities. Use hot dipped galvanized fasteners and stainless steel or copper corner braces to maintain the function of these important construction items.

Some common-sense precautions should be followed to minimize exposure to preservative chemicals:

If you are not comfortable using treated wood, consider using recycled plastic lumber, stones, or concrete blocks as framing material. You also could consider using naturally decay-resistant wood such as black locust, black walnut, cypress, Osage orange, red cedar, redwood, or white oak for the project. These woods may be more expensive and difficult to obtain, but they can remain rot-resistant in the soil for over 25 years.