Technology to Make Life Easier in the Field

Connected devices are becoming the norm in households including everything from outlets and switches to lightbulbs and sensors for water leaks. The horticulture industry has not been left out of the connected devices revolution.  New irrigation and climate controllers offer remote management from your phone or tablet giving you the ability to irrigate a field or close up a high tunnel from anywhere with internet or cellular connection.

Irrigation controllers are a tool that I rarely see used in the Iowa produce industry.  However, irrigation is a farm task that can be automated requiring only minimal input and observation to adjust on a weekly basis.  They do not need to be expensive, complicated, or difficult to install.  More advanced systems can be connected to rain sensors or soil moisture sensors to automatically delay an irrigation cycle.  The newest systems can be connected to a weather station or weather source via the internet.  These connected systems can be accessed through your computer, cell phone, or tablet and can automatically adjust run times based on environmental conditions such as rainfall, soil moisture, and temperature. 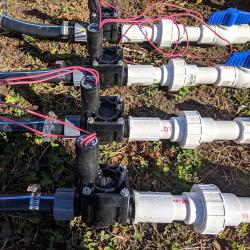 To get started setting up an irrigation controller, lets define a few common irrigation terms:

A basic irrigation system only needs a controller, a couple of irrigation valves, a backflow prevention device, and a filter.  If electricity is not nearby, battery-powered controllers (such as the Hunter NODE-100 and Rainbird ESP-9V) are available to operate the valves.  To install an irrigation valve, plumb it inline between the water source and the zone.  Placing a union fitting on both sides of the valve to make it easier to replace when the valve inevitably wears out.  Wiring an irrigation controller is just as simple.  A solenoid has two wires.  One wire goes to the common terminal on the controller and one wire goes to a zone terminal on the controller.  Generally, it does not matter which one is which but always read and follow the controller instructions before installing.  When connecting multiple valves to an irrigation controller, the common wires are all connected together.  When connecting multiple valve to an irrigation controller, multi strand wire is used to keep the wire clutter better organized.  The number of wire strands needed equals the number of valves plus one (for common) though it is a good idea to have a couple of extra strands for future growth or if a single strand goes bad the entire system does not need to be rewired.  Cost for a basic irrigation controller that can operate multiple zones is as low as $50 with valves starting around $15 each.

Many new irrigation controllers can accommodate a rain sensor.  When activated, a rain sensor will delay an irrigation cycle for a user-programmed length of time.  Typically 1 to 3 days.  This is a helpful feature when irrigating outdoor crops but caution should be used when a controller is managing irrigation for outdoor crops in conjunction with a high tunnel as not all controllers are to able distinguish which valves to delay and which not to delay.  For some controllers, the delay is all valves or no valves.

Several products such as the Hunter phc-1200i, Rachio 3 Smart Sprinkler, Rainbird ESP-Me series, Orbit B-hyve, and Gro Controller by Scotts offer internet connectivity.  Cost for these system vary from $150 to $300.  Features vary from manufacturer to manufacturer but some premium features include:

Choose an irrigation controller made from a well-known, reliable manufacturer.  It should be easy to connect the valves and easy to program.  If it is not easy to use, it will not be used.  A controller should have the ability to control as many zones as needed plus a few extra to allow for future growth.  If purchasing a connected controller, download and test the application as well as the web interface to ensure it suites your needs and works with your devices.

Irrigation controllers help to reduce effort while automating an irrigation system.  However, it is still up to the user to monitor plants and make regular adjustment to the schedule to ensure the appropriate amount of water is applied.  This means regularly scouting soil moisture and adjusting run times as needed.