Sweet potato, Ipomoea batatas, is a warm-season vegetable crop that is widely grown throughout the world. In United States commercial production is mainly in the southern states, particularly North Carolina and Louisiana. The sweet potato is a trailing vine which roots down into the soil along the vine. Some of these roots then swell to form the storage root which we harvest and eat. Many parts of the plant are edible, including leaves, roots, and vines. Tender leaves are a delicacy in a number of Asian and South-East Asian countries.

Sweet potatoes are planted from slips or transplants. To grow successfully, sweet potatoes prefer both warm days and nights. Sweet potato plants require a long frost-free growing season to mature large, useful roots. Depending upon the cultivar, sweet potatoes come in different sizes and colors (orange-fleshed, white, orange, deep-purple varieties). The sweet potato is an important source of beta-carotene, the precursor to Vitamin A. Just 125g of a fresh sweet potato roots from most orange-fleshed varieties contain enough beta-carotene to provide the daily pro-vitamin needs of a preschooler. It is also a valuable source of vitamins B, C, and E and it contains moderate levels of iron and zinc. Sweet potato can certainly be put in the health food category and its production provides opportunities for crop diversification, and expansion of markets that support local food production in Iowa.

In the Midwest, short growing seasons often limit the production of this crop; however, they can be grown successfully with a little extra care and attention. Research conducted at Iowa State University shows promise for this crop. Experiments conducted in 2012 and 2013 evaluated sweet potato cultivars and optimum plant spacing for increased crop productivity. Description of cultivars is given in Table 1. Preliminary results show cultivars such as Beauregard, Covington, and Evangeline producing decent yields and acceptable crop quality.

Yield of Jumbo grade roots was highest in Beauregard and ‘Evangeline’ (Figure 1). Grade 1 root yield ranged from 6,700 to 18,000 lbs/A. Grade 1 root yield was highest for ‘Beauregard’ and ‘Evangeline’. ‘Beauregard’ has been a standard workhorse cultivar in sweet potato growing areas of United States.  ‘Evageline’ is a relatively new cultivar with characteristics similar to those of ‘Beauregard’ but with southern root-knot nematode resistance and higher sucrose content. There were no statistically significant differences in yield for grade 2 roots among treatments. 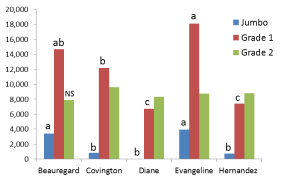 Root quality in terms of average root length indicate no statistically significant difference among cultivars, however, average root width was significantly different among cultivars with highest width for ‘Beauregard’ (Table 3). Average root width was lowest in ‘Diane’. Laboratory analysis of crushed sweet potato showed highest sugar concentration in cultivar ‘Hernandez’. Cultivar ‘Beauregard’ had the lowest sugar content. Results from this study indicate that ‘Evangeline’ and ‘Beauregard’ have excellent yields for Grade 1 roots. ‘Covington’ also shows promise and could be a grown as one of the sweet potato cultivar for production in Iowa. Cultivar pictures are shown in Figure 1 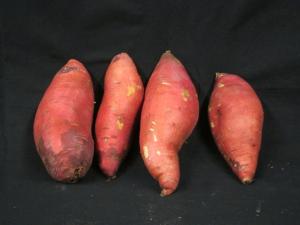 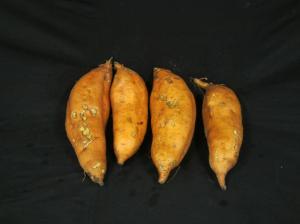 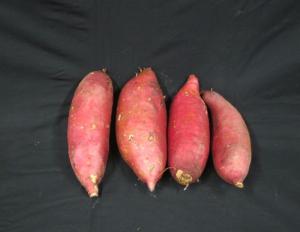 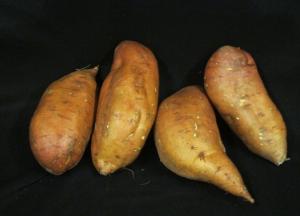 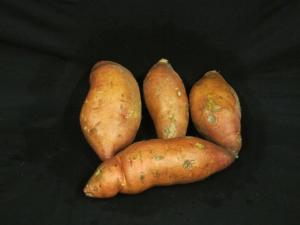