On Monday 10 August, 2020 a devastating storm ripped past Iowa. It was unexpected and was a mighty one. According to Justin Glisan, State Climatologist State of Iowa, said that this storm called “derecho” (lasted 770 miles 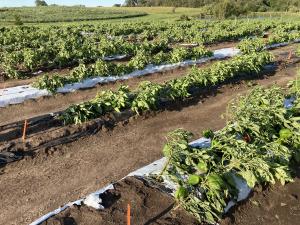 starting in Southern SD and ending in western Ohio).  Derecho is a Spanish term meaning “direct or straight”.  The violent storms produced heavy winds and/or hail. Damage to vegetable crops by severe wind and hail includes stem breakage, stem bruising and wounding, loss of flowers and small fruit, holes and spots on fruits, leaf defoliation, leaf tearing and shredding. Defoliation reduces leaf area and plants will need to grow new leaves. It will take several weeks to replace the leaf area lost which will reduce overall yield and cause delays in maturity. If crops are more advanced, loss of leaf area can reduce fruit quality. Leaf area recovery (growing new leaves) will be aided by additional nitrogen applications after the storm event.

A major concern in solanaceous crops such as tomato and pepper is the fruit bruising and wounding. 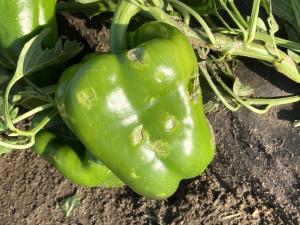 Fruits may be rendered unmarketable or of reduced grade. Even though it has been few weeks after the storm, there might be fruits that still show damage. Fruits with damage and wounds increase the incidence of fruit diseases and storage rots. In particular, bacterial rots that normally are minimal may be increased in damaged fruits. In plants such as tomatoes and peppers, it is better to remove damaged fruits from plants. These fruits are likely to be unmarketable and will just be a drain on food resources produced by the plant. By removing damaged fruits, remaining uninjured fruits will have access to more water, and nutrients produced by the plant. Additionally in the case of peppers, stem breakage or injury can lead to major losses due to loss of fruiting area as well as increased sunburn as plants are exposed to direct intense sunlight.

In the case of vining crops such as butternut, acorn, and buttercup squashes recovery from the damage will be quicker as the plants will produce new branches, although production will be delayed. Crops such as pumpkins may suffer from spotting due to hail but those spots, if not very intense, will heal over. In general, effects of storm damage on vegetable crops and recovery of crops will depend on a number of factors including the type of vegetable, stage of growth, weather conditions immediately after storms, and prevalence of disease organisms. Continued hot, wet conditions after storm events pose the most risk by increasing disease incidence, particularly bacterial diseases. Bacterial diseases have been shown to be more severe after storm damage as they can readily enter through wounds. Including copper products and other synthetic fungicides in spray programs after storm injury is recommended to limit bacterial diseases. For organic vegetable growers, there are peroxide-based (Oxidate®) and biological fungicides (Serenade®, Cease®) that are available that could be used to manage diseases after storm events. The goal is to ensure that the plant is stays protected as it recovers from the storm damage and produces more flowers and fruits.

Given that we are getting close to the end of the growing season does not mean that we pay less attention to plants that survived the storm. These plants are still actively growing and if properly managed could produce meaningful marketable produce. It is important to keep up with the plant nutrient needs and apply additional nitrogen to encourage new growth where appropriate. Although insect populations are slowly winding down, scouting and monitoring is key to integrated pest management. One good example is the migration of spotted cucumber beetles from cucurbits to other crops such as peppers and brassica crops. These beetles damage pepper fruits by making holes near the calyx region of the fruit and rendering the fruit non-marketable. If needed, insecticides should be applied to manage insect pests. Application of fungicides and including copper compounds should also be considered where bacterial diseases are of concern.