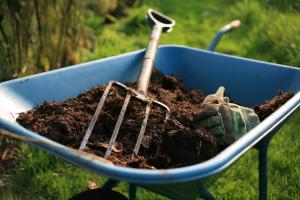 The term “soil health” has been generating a lot of buzz as we explore options to develop sustainable vegetable production systems. Based on the definition by the United Nations Food and Agriculture Organization, soil health is the capacity of soil to function as a living system, with ecosystem and land use boundaries, to sustain plant and animal productivity, maintain or enhance water and air quality, and promote plant and animal health. It is important to realize that soil is a living system and activities that affect soil have the potential to detrimentally affect its health. From the standpoint of soil, there are three main categories of soil health indicators: chemical, physical and biological. All three indicators are critical for optimum soil health and influence various functions. The table below shows the relationship between indicator type and soil function.

Vegetable production follows an annual cropping system where planting and harvest takes place within one calendar year. Excluding vegetables like asparagus and rhubarb, most vegetable crops are planted late-spring to early-summer and harvested throughout the year based on their horticultural maturity. Vegetable cropping systems are intensive and often include practices that disturb soil such as primary tillage, incorporation of fertilizers and herbicides, laying of plastic mulch, cultivation to manage weeds, hilling and harvest. Activities that disturb soil affect soil organic matter and ultimately, the overall health and well-being of soil. Above mentioned practices such as tillage, cultivation, etc. decrease soil organic matter and could negatively affect biological activity in the soil. That being said, it is not practical to completely eliminate those practices as they are important and critical in many ways to establish and maintain high yielding and high quality vegetable crops. So is there a plausible solution to this conundrum? Yes, there is. Taking a balanced approach where emphasis is given on increasing or maintaining organic matter, improving soil structure and drainage, sequestering carbon, suppressing soil erosion, and practicing crop rotation, will significantly improve soil quality and health.

Monitoring soil quality is an exercise in identifying soil properties that are responsive to management, affect or correlate with environmental outcomes, and are capable of being precisely measured within certain technical and economic constraints. Given these constraints below are few key areas to focus on to improve soil health in vegetable cropping systems:

Vegetable production systems often rely on use of fertilizers, lime, and elemental sulfur for meeting crop nutrient demands and maintaining optimum soil pH. Care should be given to apply the recommended rate and nothing in excess. Over application of these products can affect soil nutrient balance, soil microbial populations and could lead to poor crop growth and yield.

The practice of tillage is necessary for incorporation of fertilizer, compost, manure and crop residue, better seed to soil contact, and installation of plastic mulch. On the other hand, tillage is one of the major practices that reduce organic matter level in the soil. Each time soil is tilled, it is aerated. This stimulates growth and activity of aerobic microorganisms which feed on organic matter. This leads to faster decomposition of organic matter, resulting in the formation of less stable humus and an increased liberation of CO2, and thus a reduction in organic matter. Also, repetitive tillage breaks up soil aggregates, degrades soil structure, reduces soil water holding, and detrimentally affects population of soil fauna such as earthworms that contribute to nutrient cycling and soil structure. Suggested approach to balance the positive and negative aspects of tillage is to till only when it is necessary. Conservation tillage systems such as no-tillage and strip-tillage systems can also be utilized for crops such as pumpkin, pepper, and broccoli. Such systems need advance skills and knowledge and should be first experimented in a small area before being expanded to the entire production system.

Soil drainage is determined strongly by topography - soils in depressions at the bottom of hills tend to remain wet for extended periods of time because they receive water (and sediments) from upslope. Waterlogged conditions can significantly reduce microbial population and diversity and impede nutrient cycling. A well aerated soil supports microbial health and ultimately health of the soil. Soil compaction also plays a key role in soil health as compacted soils have shown to contain fewer earthworms than non-compacted soils. Addition of organic matter in the form of compost, manure, and cover crops can alleviate soil compaction issues.