Saving Seeds from your Garden 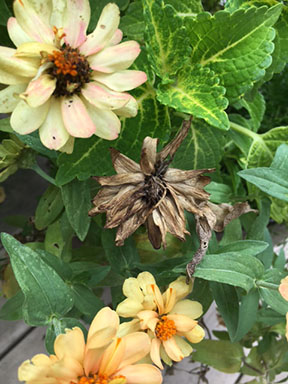 Seeds are one of the most interesting parts of the plant world because packed into what is sometimes just the size of a dust speck is the potential for an entire plant. They are abundant this time of year on many of our garden and landscape plants - in fruits, faded flowers, or pods.

There are many reasons gardeners collect and save some of their garden seed for replanting from year - perhaps to save money or for the challenge and surprise. Some gardeners carefully save seed a specific variety or a family heirloom that can’t be found in seed catalogs. That is exactly how Seed Savers Exchange in Decorah, Iowa, started in 1975 by Diante Ott Whealy and Kent Whealy. It began when Diane’s grandfather became terminally ill and she wanted to preserve two of the plants that his parents had brought over from Bavaria in the late 1800s when they immigrated to America. They have now expanded their two plants in to thousands with many participating members who donate seeds to the Heritage Farm. If you are interested in learning more about Seed Savers Exchange check out their website at www.seedsavers.org.

Seed saving is a fun family activity and the seeds of many garden plants are easy to collect and save. There are a few things to keep in mind when collecting and saving seeds to assure that they are viable the following year.

Varieties of several vegetables that we purchase the seed or plants for our gardens are hybrids. These plants are products of crosses between two different varieties, combining the desirable traits of the parent plants. The seeds from hybrid crops may or may not produce viable seed. If they produce plants, they will not be like their parents. This isn’t as critical with hybrid flowers, but be prepared for plants of different size and flower colors. However, with vegetables, these seeds may not yield fruit of the optimum flavor, size or color or plant growth habit.

Cross pollinations among members of the same species may create an interesting offspring the following year. For example, when gourds, pumpkins and squash are planted close to each other in a garden, there is no problem or changes in the quality of fruit that develops from cross pollination that year because the genetic combination is in the seed. If the seed from one of those fruit and is saved and planted it the next year, the vines will produce fruit unlike the original parent plant – often inferior in flavor and other characteristics.

The fruit/seed must be mature 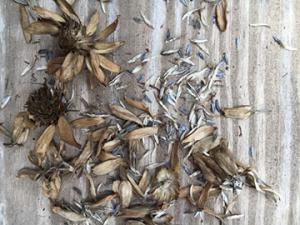 When saving seed from ornamental flowering plants, such as zinnias, marigolds, and coneflowers, wait until the flower is completely shriveled and dry. The seed of these plants will be attached to the shriveled petals. Seeds from pods, such as peas, beans, lupine and larkspur, should also be harvested from pods that are completely dry. The seeds will rattle inside the pod. Remove them from the plant and dry them at least two weeks before shelling.

An exception is impatiens; the fleshy fruit becomes plump and then explodes, flinging the seeds away from the parent plant. Carefully pick these fruit and place them in a paper bag to catch the seeds.

Seeds from flesh fruit, such as peppers and pumpkins, should be collected when the fruit is completely ripe and even over ripe and starting to shrivel on the plant. Scoop the seeds out and separate from the gel or pulp, rinse them off and lay them out on paper towels to thoroughly dry. Seeds that aren’t completely dried may mold while in storage.

Store them in the right environment

Seeds are living organisms and if they are stored improperly, the will lose their viability. They should be stored dry in a cool location, and preferably in an air tight container. Put the seeds in a small paper envelope or wrap in paper. Label the envelope with the name of the plant and the date you collected the seed. Place the envelopes in a glass jar or air tight plastic container. To keep the seed dry, it is a good idea to put a desiccant in the jar to absorb moisture from the air. Silica gel that is sold in bulk for drying flowers can be used or the small packets of desiccants often found in shoe boxes. A tablespoon or two of powdered milk wrapped in a facial tissue and placed in the seed storage container will also work to absorb excess moisture from the air. Seal the container and store it in the back of your refrigerator. 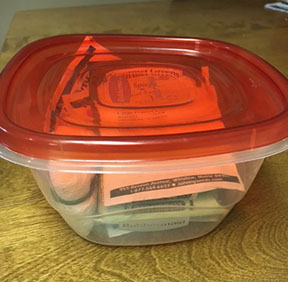 If you have some unused seed in packets left over from this year’s garden, it can be saved in a similar way as collected seed. Tape the open end shut put the packets in an air tight container and store as described above.