Recommendations for a Snake-free House 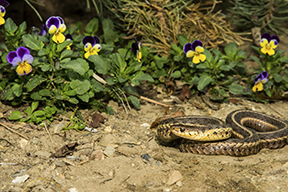 Warm spring temperatures bring to life many plants and animals that have been in hiding or far away from Iowa during the cold winter months. These warm temperatures raise the body temperature of Iowa’s 28 species of cold-blooded snakes, allowing for an often conspicuous departure from their winter hibernations.

Although the sounds and sights of spring’s return are always a welcome sight, for many homeowners finding a snake in their garage or slithering across the back deck is less desirable. Iowa State University Extension and Outreach offers the following recommendations for making your home as unattractive to snakes as possible.

The best recourse when you find a snake in a dwelling is to direct it into a container with a broom and then release it on another area on your property away from your house. Then consider the recommendations above to reduce the attractiveness or accessibility of your home to snakes and other unwelcome critters.

The most common snake in Iowa, the garter snake, is easily identifiable by its light, horizontally stripes and is harmless. In fact, only four of Iowa’s 28 snake species are dangerous to pets or humans. These venomous snakes, which include two species of rattlesnakes, the eastern massasauga and the copperhead, are all large and rarely found outside of large tracts of their natural grassland, wetland or forested habitats. The prairie rattlesnake, copperhead, and massasauga are all listed as endangered species in Iowa and cannot be lethally removed.

Snakes don't do any direct damage to buildings because they don't dig their own holes, instead using holes other animals have made. Although snakes elicit strong negative reactions among many, Iowa’s native snakes play important roles in the state’s ecosystem, often doing more good than harm for a homeowner through their appetite for more problematic rodents and insects. Managing property to reduce potential attractiveness for snakes is the best way to ensure they play this important role where they belong - outside the home.