Article reprinted with permission from: 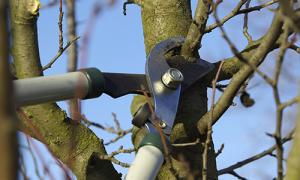 At this stage of winter, trees on Iowa’s landscape are still months from blooming and providing shade, which makes this the prime time of the year to give trees a tune-up with pruning. Using proper pruning techniques avoids harming trees. Here are some tips from horticulturists with Iowa State University Extension and Outreach on the proper way to prune trees in winter.

When is the best time to prune shade and ornamental trees?

February through March is generally regarded as the best time to prune most deciduous trees. The absence of foliage at this time of year gives the individual a clear view of the tree and allows the selection and removal of appropriate branches. Also, the walling-off or compartmentalization of wounds occurs most rapidly just prior to the onset of growth in spring. Oaks are an exception. The winter months – December, January and February – are the best time to prune oak trees.

To reduce the risk of an oak wilt infection, do not prune oaks from March through October. Oak wilt is a fungal disease that is lethal to many oaks. It can spread from infected trees to healthy trees by sap-feeding beetles (“picnic bugs”). If an oak tree must be pruned in spring or summer (such as after a storm), apply latex housepaint to the pruning cuts to avoid attracting sap-feeding beetles to the wounds.

Which pruning tool should be used when removing a tree branch?

There are various types of pruning tools. The size of the branch determines the best tool for the job.

What is the proper way to remove a large tree branch?

To prevent extensive bark damage, use a three-cut procedure when pruning branches that are greater than 1.5 inches in diameter.  Make the first cut six to 12 inches from the main branch or trunk. Cut upward and go about one-third of the way through the branch. Make the second cut one to two inches beyond the first. Saw downward from the top of the branch. As the second cut is made, the weight of the branch will cause it to break at the pivot point between the two cuts. (The initial, bottom cut prevents the branch from ripping off a large piece of bark as it breaks.) Make the final cut just beyond the branch collar and branch bark ridge.

Sap is flowing from a pruning cut on my maple tree. Is this harmful to the tree?

Some tree species, such as maple, birch and elm, “bleed” heavily when pruned in late winter or early spring. However, the loss of sap does not harm the trees. The trees will not “bleed” to death. Eventually the flow of sap will slow and stop.