An Ode to the Dickcissel: Rural Iowa's Most Unremarkable Remarkable Bird

Wild turkey. Ring-necked pheasant. Trumpeter swan. Turkey vulture. Northern bobwhite. These are the remarkable birds of Iowa’s rural landscapes. They’re large, conspicuous, and broadly recognized. These species, and a few more, are those most associated with rural life and synonymous with our experience on the farm. However, I submit that to the trained eye, and ear, the bird that most symbolizes Iowa’s countryside is not these charismatic familiar species, but rather, the unremarkable yet fascinatingly remarkable Dickcissel. 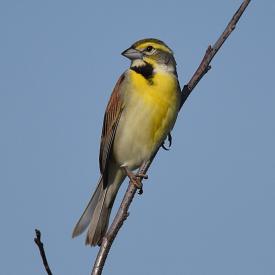 Everyone has seen and heard this bird in Iowa in the summer time, yet few notice. Rather, this sparrow-sized bird, with its striking yellow chest and stout bill, spends its days in Iowa courting its mate or raising its young often unnoticed by the humans with whom it shares its environment before its sudden departure for the plains of Venezuela where it bides its time until returning to Iowa for another year on our roadsides and field edges.

Observers who train their ear for the sound of the bird repeating their name –DICK DICK see see see – can find great joy in noticing the spaces we share with this visitor from the southern hemisphere. Midwestern naturalists and bird lovers have long been in on the secret joys of the Dickcissel, as captured by the early 20th century naturalist Dr. Alfred Gross his 1921 account of the bird’s life in Illinois;

“To one who journeys along the dusty roads of Central Illinois on a hot summer day, there is nothing that relieves the quiet monotony of the sunny open landscape more than the earnest incessant calls of the Dickcissel. Even the farmer and the layman, whose chief interest may be in the dollars and cents of the productive grain fields, cannot fail to have their attention attracted by this bird as it loudly and lustily announces its presence.”

Today, our drives are at speeds and on surfaces unimaginable in the early 20th century, but still reliably there to break up the monotony of a drive down a four-lane highway or gravel road is the ever present call of the male Dickcissel, trying to attract the attention of a female nearby.

The females of the species are entirely responsible for the construction of the nests and raising of the young, leaving the males ample times to set the soundtrack of the countryside. Females tune in between runs to their nests, which they build a few inches from the ground in isolated shrubs or dense stands of grasses and wildflowers in otherwise open country. Dickcissels are surprisingly undiscerning in their selection of open areas, which makes them well-adapted to Iowa’s highly modified landscape. Basically, any grassy area spared the mower during May through July can play host to a breeding pair (or pairs).

After courting her mate and building her nest, the hen lays 3 to 6 eggs and incubates them for 12 days before the featherless young are born. She retrieves insects for the young for 10 more days in the nest until they gain the strength and courage to depart. These ‘teenaged’ young aren’t fully independent for another week or two until finally, they are fledged.

As the corn grows taller, the weather begins to change, and the days shorten, the new young of the year, the females, and those noisy males join together in what start as small flocks in the north to head south on a journey across continents. In Iowa, these flocks number only in the dozens, but by the time all the Dickcissels of the Midwest and Great Plains congregate in the southern U.S. and northern Mexico, the flocks number in the thousands.

By September, the flocks begin to arrive from their neotropical journey in a small farming and ranching community wedged between two mountain ranges in Venezuela called Los Llanos. Los Llanos translates to “the plains” and a google search on the region returns pictures not unlike landscapes common in Iowa and other Great Plains states with rolling grassy hills, wetlands, farms, and farmers.

There, flocks that started in the dozens on Midwestern roadsides and pastures have grown to a million birds or more. In this environment, and at these numbers, the Dickcissel surrenders its unremarkable status and often captures the ire of the Venezuelan farmer for their affinity for rice and sorghum crops. In fact, control efforts on their relatively small wintering areas where the Dickcissel spends over half its year have been a threat to their abundance and distribution on Midwestern breeding grounds for decades.

As the southern-hemisphere days begin to shorten and seasons begin to change, the lure of Midwestern roadsides begins to set in again for the male Dickcissels in April. Its then when the males depart, ahead of the females to stake out their spot on roadsides and grassy fields back in the U.S. before the slightly delayed return of the females. Then, in May, back here in Iowa, the annual ritual begins again, with the male announcing his presence for the females and anyone else who will listen. I’m happy to count myself among those tuned in to what this world traveler has to say.