Managing a Warm Summer in a High Tunnel 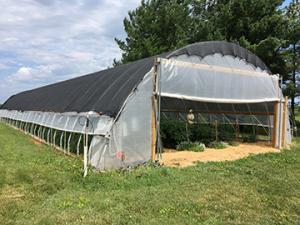 High tunnels bring many benefits to specialty crops including season extension and increased quality.  However, warm summer temperatures inside high tunnels create their own problems to manage.  Late planted cool season crops do not tolerate the warmer temperatures.  Crops such as tomatoes, peppers, and beans are susceptible to high temperature stress.  Water usage also increases and nutritional issues may arise.

Excessively high temperatures are detrimental to plant germination and growth of cool season crops.  Lettuce and other greens do not germinate when soil temperatures are above 80 - 85°F.  Excessive warm temperatures, in conjunction with day length, cause greens and brassicas to switch from a vegetative state to a reproductive state.  They send up a flower stalk, called bolting, become bitter, or form very loose heads.  Plants that have bolted or become bitter should be removed from the field to make room for warm season crops or replanting of cool season crops this fall.

Warm season crops, such as tomatoes and peppers, flourish with warmer temperatures.  However, excessive temperatures can cause flower abortion, pollen sterility and ripening disorders which severely reduces marketable yield of tomatoes. In addition to blossom drop, high temperature and high light intensity contribute to sunscald injury, uneven ripening, and cracking of tomato fruit.  Fruit that set before extreme temperatures are reached are more prone to disorders such as yellow shoulder and blotchy ripening due to failure of lycopene to form.  Blossom end rot in peppers and tomatoes and other nutritional disorders, particularly potassium deficiency, are more pronounced under hot and dry conditions.

Passive ventilation is the primary method of cooling a high tunnel.  Air flowing through a high tunnel brings in fresh, cool air as warm air exits the high tunnel via sidewalls and end wall doors.  With rooftop vents, and to a lesser degree gable, warm air rises and is released while simultaneously pulling in replacement cool air through the side and end walls.  In windy locations, gable or rooftop vents are a necessity for when sidewalls must remain closed.

Farmers can wait until temperatures cool back down for fruit to resume setting or actively manage the temperature in the high tunnel.  Shade cloth can lower air temperatures within a high tunnel by as much as 6-9°F. The fabric can be placed on the high tunnel when the ambient air temperatures exceeds a maximum of 85°F and looks to stay warm for the duration of the summer.  Shade cloth is made from knitted polyethylene strands or woven polyester and is water permeable.  It works by reducing light intensity thereby reducing temperature.  There are a number of different types of shade cloth available but black or white is the most commonly used color. Shade cloth is rated by the percent of light blocked, varying from 20 to 90 percent. Seasonal and crop species requirements dictate which percent shade cloth should be used. In Iowa a 30-50% percent white or black shade cloth will help reduce air temperature without detrimentally affecting crop quality.  Shade cloth costs between $400 to $600 for a 30’ by 96’ high tunnel but it can be used for several years.  Store in a rodent proof container following removal in early fall.

Fans are regularly added to increase airflow through a high tunnel to counteract restricted airflow from dense canopies that occur when row spacing is too narrow.  However, effectiveness of fans is questionable in these circumstances.  Air flows like water and electricity; it travels across the path of least resistance.  When fans are placed at the end of a row to push air through the high tunnel, air will flow up and over the canopy within a few feet.  No cooling is provided in the center of the high tunnel where it is most needed.  Similarly, there is no effect on cooling when the fan is placed in the center of the high tunnel as it is not capable of pulling in fresh air or pushing out air through the row.

Where airflow is restricted due to a dense canopy, misting systems may be an option.  However, leaf mold frequently occurs on tomatoes in warm, humid conditions so generally misting systems are not recommended.  Leaf mold is primarily prevented through good air circulation; however, once it occurs, spores are spread via air movement.  Adding fans can actually help spread the disease.  If leaf mold is an annual problem, increase row spacing to improve circulation and use resistant varieties.

Under hot, dry conditions, irrigation systems are pushed to their limits.  Monitor the irrigation system every time it runs. Search for leaks, blowouts, and plugged emitters.  Start by checking the pressure gauges on the manifold; they will read lower than normal if there is a leak, blowout, or clogged filter.  Then check the end of each row to verify water is reaching the end of the line.  Filters may need to be cleaned on a weekly or biweekly basis especially if the source water is from a deep well.  Soaking filters in lime and rust removers aids in cleaning.  While inspecting the irrigation system, also look for nutritional issues on plants.  Blossom end rot and potassium deficiencies are generally more common during hot, dry weather.

How long to run the irrigation system depends on the system, crop grown, and the specific site.  Ideally, irrigation should be turned on just before plants wilt.  Monitor soil moisture.  It should be moist but not saturated.  Tensiometers and digital soil moisture meters are effective tools to accurately measure soil moisture.  An excel file to help estimate water run times and frequency using soil moisture tools can be found at http://www.iowaproduce.org/drip-irrigation-calculators.  When irrigating, most crops should be irrigated deeply and infrequently.  However, with tomatoes and peppers, the soil moisture curve should remain flatter; irrigate more frequently but for shorter durations to prevent fruit splitting and blossom end rot.  It is also a good idea to have a backup plan in place to deliver water in case of irrigation system failure.