There have been reports of potato leafhopper in Iowa alfalfa (Photo 1), and it's time to think about assessing alfalfa stands. Potato leafhoppers do not overwinter in Iowa, but they are persistent alfalfa pests every growing season. Storms along the Gulf of Mexico bring adult potato leafhoppers north and drop into fields every spring. 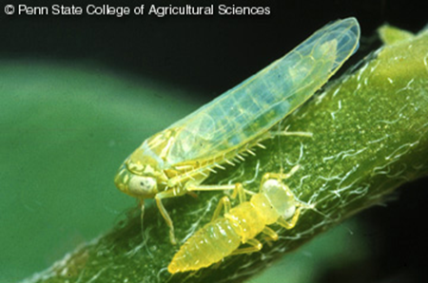 Mated females begin to deposit  two to three eggs per day in alfalfa stems as soon as they land. Pale, green nymphs emerge in 7-10 days depending on the temperature; the fastest development occurs at 86°F. They go through five instars in about two weeks. Therefore, a large population could develop three weeks after the northern migration. The extended egg-laying period can result in at least two overlapping generations in Iowa every year.

Potato leafhoppers have piercing-sucking stylets. They cause physical damage when probing to feed and also inject saliva that plugs vascular tissue. Initially, alfalfa leaf tips will turn yellow, which is commonly referred to as "hopperburn" (Photo 2). Heavily infested plants will be stunted, particularly new stands and regrowth after cutting. In some cases, large leafhopper populations can significantly reduce tonnage of the current crop, as well as the following crop. 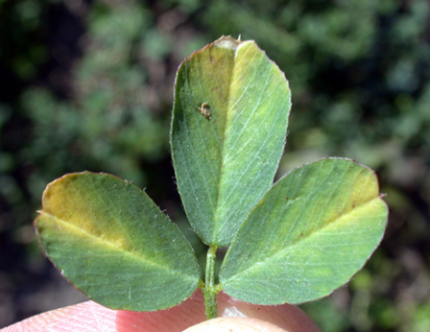 Potato leafhoppers do not typically build up to damaging levels during the first crop in Iowa. Fields should be monitored weekly after the first cutting until the end of the season. A sweep net is the most effective way to sample for potato leafhoppers because adults and nymphs are very active and easily disturbed. Adults will jump or fly away while nymphs quickly move sideways and backwards. A detailed description on how to make and use a sweep net is available here.

Fields should be sampled when dry and in calm conditions. Sweep vigorously through foliage, using a 180-degree motion for one sweep. For each field, stop at  four to five locations and take 25 sweeps per location. Count the number of nymphs and adults at each location and estimate the number of potato leafhoppers per sweep for each field. Keep in mind nymphs will be near the sweep net ring and adults will be at the bottom of the net.

Table 1. Economic threshold of potato leafhopper, based on the average number of leafhoppers per sweep (Originally published by John Tooker, Penn State Extension. 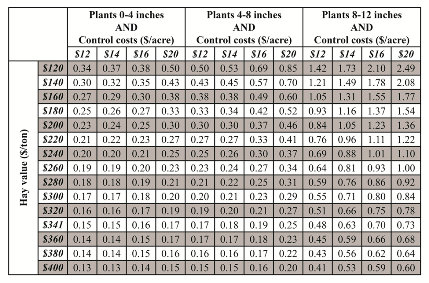 Reprinted with permission from Iowa State University Extension and Outreach