Make this deer season lead bullet free – for the birds!

This fall, over 100,000 Iowans will take refuge in the fields and forests of our state to participate in an annual ritual: 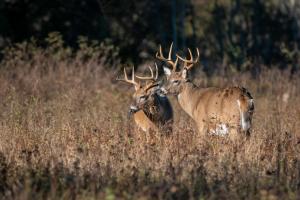 deer season. This ritual however has shallow roots, dating only to the 1950s thanks to the successful restoration of white-tailed deer following their extinction in the state. The annual tradition is important for farms and farmers, car bumpers and their insurance companies, and most importantly, families who annually share time outdoors, creating memories, and harvest a healthy food source. The growth of this tradition in Iowa is a true conservation success story.

Soaring above many of these hunters this fall will be another symbol of the conservation movement’s meritorious achievements of the 20th century. The bald eagle was once entirely absent from Iowa’s rivers and fields due to the impacts of the chemical DDT. But, as the story for the white-tails goes, the eagle was restored through the passionate efforts of concerned citizens and wildlife agencies and today can be seen in every corner of the state.

Today, thanks to 21st century research in Minnesota, Arizona, and elsewhere, we’re learning about an important nexus between these two conservation success stories that’s leading scientists and both hunting and non-hunting wildlife champions to encourage a minor tweak in the traditional equipment used for hunting deer.

Lead bullets are the traditional ammunition used to harvest deer because they are effective, widely available, and inexpensive. Lead bullets are as old as firearm technology itself, but today’s bullets are highly accurate and propelled at a high velocity. These bullets are effective at humanely killing deer and other quarry. But, researchers have found that when you use X-Ray technology on carcasses and gut piles left behind in the field, remnants of lead bullets remain.

Up to hundreds of tiny lead fragments can be left behind by a single bullet and when parts of the shot deer are left in the field (as is the case with gut piles or processed carcasses) other wildlife, including notably the bald eagle, can encounter the lead.

Lead is poisonous to all animals and the Centers for Disease Control and Prevention say that no level of lead dosing in humans is safe. Birds, including the suite of scavenging birds like bald eagles, are even more uniquely vulnerable to lead poisoning because of the unique structure and chemistry of their digestive system.

The Iowa DNR reports that around 100,000 deer are harvested in the state each year and the majority of these are harvested with bullets. Although there is no research in Iowa on what proportion of these deer are harvested with lead bullets, anecdotal evidence suggests the percentage is high. This means that each fall, a spike in potentially lead-contaminated food sources are available for bald eagles and other scavenging birds. A study in Iowa found that half of bald eagles admitted to wildlife rehabilitation facilities in Iowa were experiencing lead poisoning.

The good news is that there are alternatives to lead bullets – technology that today is accessible online and in many retail stores that even just 10 years ago would have been hard to find. Non-lead bullets are often made of copper alloys and have similar, and in some cases even better, ballistic performance than traditional lead-based ammunition. Hunters willing to switch to hunting with non-lead ammunition need only to find a non-lead round that shoots well for them in their gun, sight the round in on the range, and go back to hunting.

The story of white-tailed deer and bald eagles in Iowa’s landscape is one filled with lessons learned and new challenges confronted. From extirpation due to market hunting for deer or DDT for eagles, to restoration, and today abundance, humans and the wildlife we care for have been working to live together in this state. This unfolding story about the connections between deer, people, and eagles is one more chapter in that story of learning to live together and protect the resources we all value.

That’s why this fall is a great time to make the switch to hunting deer (and other wildlife) lead free. For the birds!