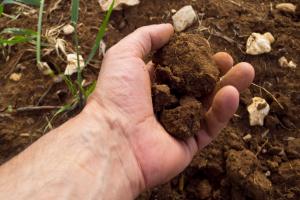 Soil fertility and nutrient management is one of the important factors that have a direct impact on crop yield and quality. Irrespective of the size of your field or plot, supplying plants with the right amount of nutrients at the right time is the key to a successful vegetable production enterprise. In order to achieve this objective the first step is to monitor soil nutrient levels through yearly soil tests. Collecting and conducting soil tests in the spring or fall (preferred) each year serves as a report card for the soil. Soil test reports help in determining soil organic matter, pH, electrical conductivity, cation exchange capacity, and levels of important macro (phosphorus, potassium, calcium, magnesium) and micronutrients (boron, zinc, etc.). These reports also help estimating lime or sulfur application rates to increase or reduce soil pH, respectively.

Maintaining a soil pH between 6.0 and 7.0 is recommended for most crop rotations that include vegetable crops. A large number of vegetables grow well in that range as most of the nutrients are easily available. Crops such as asparagus, brassicas, garlic, onions, and spinach are crops that are sensitive to low pH, requiring pH maintenance above 6.5. To track soil pH trends across years, measure soil pH at about the same time each year, during the fall or early spring.

Managing optimum soil nutrient levels is the key to maintaining a sustainable and productive vegetable production enterprise. Before a fertilization program can be planned it is important to know the cropping and soil fertilization history of the field. Information thus gleaned provides a good foundation for future nutrient management programs. Below are management aspects of some key nutrients:

Nitrogen: Nitrogen is one of the most important nutrients to manage in vegetable production systems. Nitrogen is readily leached, can volatilize if not quickly incorporated, and can be immobilized by soil microorganisms. Since nitrogen can be easily through several pathways, nitrogen is not routinely tested by soil testing laboratories for making crop recommendations. Instead, nitrogen recommendations are based on soil organic matter levels. In addition to the amount, nitrogen application timings, application methods, and sources are equally important. To minimize nitrogen loss and increase fertilizer use efficiency it is recommended to split nitrogen fertilizer application in to two or three applications. For nitrogen fertilizer rate recommendations of major vegetable crops, please refer to the Midwest Vegetable Production Guide (free to download from ISU Extension and Outreach Store; www.store.extension.iastate.edu).

Phosphorus: Adequate phosphorus is essential for plant development.  Although phosphorus is required in lower amounts than other major nutrients, it is critical in the early developmental stages of growth, and in energy transfer within the plant throughout the growing season. Vegetable crops grown in a soil testing phosphorus level of deficient or below optimum greatly benefit by phosphorus application and indicate a strong response to P fertilizer additions. Crops in soils testing optimum may or may not respond to further additions, but P may be applied to maintain the fertility level in the optimum range (P fertilizer applied at crop removal rates). The need for P by crops needs to be balanced with the environmental risk of having too much P in the soil. Phosphorus lost from the field and deposited into surface water via soil erosion, surface runoff, or tile drainage water can lead to algal blooms and fish kills. So it is critical to monitor and adjust phosphorus application through yearly soil tests. In addition to using the soil tests, to maintain soil test P at the optimum level, P fertilizer input rate should be approximately equal to P removed via harvest. A rough estimate is about 15 to 30 lb. P2O5/acre is removed by the harvest of most vegetable crops. Common fertilizer sources of phosphorus include mono ammonium phosphate, diammonium phosphate, triple superphosphate, rock phosphate, and bone meal.

Potassium:  Potassium is required by plants in approximately the same or slightly larger amounts as nitrogen. Many critical physiological processes such as photosynthesis, carbohydrate transport, and water regulation are directly influenced by potassium. Managing optimum levels of potassium in the soil and the plant leads to improved disease resistance, increased drought tolerance, and vigorous vegetative growth. As a result, potassium fertilization is frequently associated with improved crop quality as well as better handling and storage properties. Plants deficient in potassium are stunted and develop poor root systems. Crops are very likely to respond to K fertilizer when the soil test indicates that K is deficient or below optimum. Poor fruit quality in tomatoes (internal whitening, uneven ripening, etc.) is often associated with potassium deficiency. Common sources of potassium include potassium nitrate, potassium sulfate and potassium chloride.

Calcium: Calcium, a structural component of plant cell walls, is most abundant in plant leaves. Calcium may be deficient in some soils where excessive potash fertilizer has been applied and/or where crops are subjected to drought stress. Calcium deficiency results in poorly developed root systems and relatively little fruit of poor quality. One of the classic examples is blossom end rot of tomatoes and pepper where fruits develop water-soaked area on or near the blossom end of the fruit which later darken and enlarges in a constantly widening circle until the fruit begins to ripen. It is caused by a lack of calcium in the developing fruit which may be due to lack of calcium uptake from the soil or to extreme fluctuations in water supply. Most vegetable cropping systems require a soil pH above 6 which is achieved by periodically applying lime which in turn supplies calcium. Calcitic limestone or aglime is a good source of lime. Other sources include calcium sulfate (gypsum), and calcium nitrate.

Magnesium: It is an important component of the chlorophyll thus plays a critical role in photosynthesis. In vegetable crops magnesium deficiencies are observed on mature bottom leaves as interveinal chlorosis. Dolomitic or high-magnesium limestone is generally used in soils that are low in magnesium and where there is a need to increase soil pH. Magnesium may be applied as a foliar spray (Epsom salt) to supply magnesium to the crop in critical situations. Organic sources such as composts, manures, and most organic fertilizers also supply magnesium.

Sulfur: Sulfur is an important nutrient for plants, especially those in the onion family and cole crops (broccoli, cabbage, and cauliflower). In soils with high pH, application of elemental sulfur not only reduces soil pH but also supplies sulfur. Sulfur can also be supplied by application of sulfur-containing nitrogen fertilizers, gypsum, or Epsom salts. Sulfur application rates are based on crop S uptake. Usually sulfur fertilization is recommended when soil sulfur level is greater than 20 ppm.

Micronutrients: Micronutrients, as the name suggests, are required in very small quantities and expressed as parts per million (ppm) in plant tissue. They include boron (B), chlorine (Cl), copper (Cu), iron (Fe), manganese (Mn), molybdenum (Mo), nickel (Ni), and zinc (Zn). Other trace elements required by some, but not all plants, include cobalt (Co), silicon (Si), sodium (Na), and vanadium (V). Although needed in very small amounts, micronutrients have an important role to play in plant growth and development. Most of them are involved in enzymatic reactions that are essential for plant survival such as photosynthesis and respiration. When testing your soil for the first time, it is recommended to test for micronutrients. Once initial concentrations are known and measures have been taken to optimize them, test for micronutrients every 4 to 5 years. For additional information on sampling procedures and suggested micronutrient levels, please download publication from ISU Extension and Outreach Store (www.extension.iastate.edu)