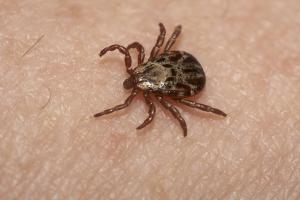 With warm temperatures and sunny skies painting an inviting picture, people across Iowa will spend time outside this summer and fall enjoying the natural wonders this state offers. While experiencing Iowa’s great outdoors people will come in contact with something less warm and fuzzy – ticks.

Ticks are active from March through November, the same months that host the most outdoor activities. Understanding the different types of ticks that are found in the state and how to remove ticks if they become attached to a human or domestic animal is the focus of a new Iowa State University Extension and Outreach publication titled ‘Ticks and Tick-borne Diseases in Iowa’ (PM 2036).

“Ticks are something we all encounter when we are outdoors,” said Laura Jesse, director and extension entomologist with the Plant and Insect Diagnostic Clinic at Iowa State University. “Most of us aren’t pleased to find a tick on us or our pets, and having information on the type of tick and how to remove it is important. There are many urban myths around ticks and being able to provide real science to the topic is helpful.”

The blacklegged or deer tick, the American dog or wood tick, and the lone star tick are the three most common species found in Iowa. While each species of tick has a range where it is most common, all three species can be found across the state.

Ticks have become infamous as carriers of Lyme disease, an illness that can be transmitted from other infected mammals to humans through ticks. Ticks feed on the blood of smaller animals like rodents and birds as they move from their nymph stage into adulthood. When adult ticks latch onto humans they can then transmit the Lyme disease if they are infected.

“It is important to be aware of the symptoms of Lyme disease,” Jesse said. “The best way to prevent infection is to locate and remove ticks immediately. Be sure to check yourself and children after returning indoors from areas likely infested with ticks (wooded or brushy areas and areas with long grass). Additionally, talk to a veterinarian about pets because there are many tick treatments that are effective for summer-long tick control for dogs and cats.”

The main outward sign of Lyme disease is a bull’s-eye-shaped skin rash at the site of the bite. Other symptoms include arthritis, facial paralysis, neurological and cardiac problems, general malaise and fatigue. The disease has also been reported in dogs, cats, horses, cattle and sheep.

Preventing tick bites can be done by wearing long-sleeved shirts and long pants and tucking pants into socks; wearing light-colored clothing to see ticks easier; using tick-specific EPA-approved repellant; and manually checking for ticks after being outside.

If a tick does bite and attach itself, it should be removed by using tweezers to grasp the tick’s mouthparts where they enter the skin. Pull the tick away from the skin and thoroughly clean and disinfect the site of the bite.

“People worry about leaving parts of the mouth still attached when removing ticks and so try various ineffective methods to get ticks to ‘back out’ of the skin,” Jesse said. “Things like using Vaseline or alcohol on a tick can irritate the tick and possibly cause it to regurgitate into you with the Lyme disease causing organism. Pulling it out quickly and cleanly is the best way to prevent regurgitation. If the mouthparts get left in the skin your body will treat it like any foreign body (for example splinters) and work to get rid of it.”