How Does the New Tax Law Act Impact Equipment Trades? 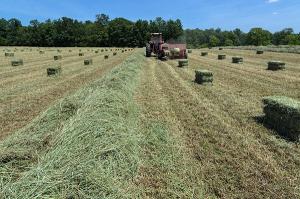 The Tax Cuts and Jobs Act preserved like-kind exchange treatment for real property, but eliminated it for personal property. Today, we take an initial look at what that means for farmers or other taxpayers looking to trade equipment or livestock in 2018.

Under 2017 law, IRC § 1031 non-recognition treatment was mandatory for a qualifying exchange of personal property. Those who did not want to apply §1031 like-kind exchange rules to a trade typically had to structure the transaction as a clear sale and purchase to avoid being automatically deemed a like-kind exchange by IRS and the courts. Taxpayers could generally accomplish this by selling the old asset to a different party than the one from whom the new asset was purchased.

A basic example illustrates this formula:

Under old law, applying automatic like-kind exchange treatment, IRC § 1245 recapture was deferred, and the basis in John’s replacement tractor was $50,000 ($0 basis in relinquished tractor, plus boot paid). John reported the transaction on Form 8824, and could generally use IRC § 179 to immediately expense $50,000, the amount of boot paid in the transaction.

The Tax Cuts and Jobs Act, H.R.1, amended IRC § 1031 by striking the word “property” and replacing it with “real property.” This means that like-kind exchange treatment is still alive and well for real property, but it is gone permanently for personal property, beginning in 2018.

A transition rule provides that a qualifying personal property exchange where either the property was disposed of or received by the taxpayer on or before December 31, 2017, is still subject to like-kind exchange treatment.  With no § 1031 treatment available to personal property in 2018, equipment or livestock “trades” will be treated as taxable events, with the taxpayer computing gain or loss based upon the difference between the amount realized on the sale of the relinquished asset and the party's adjusted basis in the asset. “Amount realized” includes any money, as well as the fair market value of property (other than money) received in the transaction. IRC §1001(b). There will be no tax deferral for §1231 gains or §1245 recapture. There will also be no deferral for a loss.

Example of “Trade” under New Law

The following example illustrates 2018 tax treatment of an equipment “trade” in light of the new law:

In 2017 and 2018, John from our above examples will have the same total income on his Form 1040. However, the difference between a § 1031 exchange and a sale and purchase is not one without distinction.

Choosing to apply higher amounts of IRC §179 or bonus depreciation to offset the recognized § 1245 gain will result in lower net Schedule F income, thereby reducing SE income. While this means less SE tax, it also means less retirement income down the road. This is an important planning consideration.

In 2018, also assume John otherwise has $125,000 in net Schedule F income. Now he must recognize the $75,000 in recapture income, which is not reported on Schedule F, but on Form 4797, Part III. But John can now expense (or depreciate using bonus depreciation) the full amount of his $125,000 purchase on Schedule F. This will result in $0 in Schedule F income and no SE tax liability.

The new IRC § 199A creates a new deduction for “qualified business income.” This deduction can generally be taken in an amount up to 20 percent of “qualified business income.” It does appear that IRC § 1245 recapture reported as gain on Form 4797 should qualify as a component of qualified business income. QBI is defined as the “net amount of qualified items of income, gain, deduction, and loss with respect to any qualified trade or business of the taxpayer. Such term shall not include any qualified REIT dividends, qualified cooperative dividends, or qualified publicly traded partnership income.” IRC § 199A(c)(1). The law also excludes wages, reasonable compensation, guaranteed payments, interest income, dividend income, and capital gain from the definition of QBI. IRC § 199A(c)(3)(B).  Although the exclusion does not mention § 1231 gain, it seems likely that IRS regulations will specify that such gain is also excluded from the definition of QBI since it is taxed like capital gain. Regulations will further define the contours of this deduction in many ways.

The sale/purchase treatment (as opposed to the like-kind exchange treatment), may be useful in some cases to create ordinary income to offset a net operating loss carryforward. Careful planning is necessary to properly handle expensing and depreciation elections in light of other income.

Reporting of the Sales Price

In the past, the adjusted basis of the relinquished property was reported on Form 8824 and carried forward to the replacement property. That number was readily available from depreciation schedules. Now, the gross sales price of the property must be reported on Form 4797, in addition to the adjusted basis. Under IRC § 1001(b), the sales price should equate to the fair market value of the relinquished property. In other words, an accurate trade-in value will be important. We will be watching to see if IRS issues regulations governing the reporting of exchanges in light of the new law.

The elimination of like-kind exchange treatment for personal property is permanent, as is the enhanced IRC § 179 deduction. 100 percent bonus depreciation, however, is available only through 2022 before it begins to taper down. It will be eliminated fully in 2027. In any event, permanent or temporary only means until the next Congress changes its mind.

As noted above, 100 percent additional first year depreciation is available to qualifying property acquired and placed into service after September 27, 2017. This includes used property. Consequently, there is a three-month window (for individual calendar year taxpayers) where 100 percent bonus depreciation and IRC §1031 treatment for like-kind personal property coexist. The new law allows 100 percent bonus to apply only to the boot paid in such like-kind exchanges.  This is because IRC § 168(k)(2)(E)(ii) states that property qualifying for bonus depreciation must meet the requirements of IRC § 179(d)(3), which states that “the cost of property does not include so much of the basis of such property as is determined by reference to the basis of other property held at any time by the person acquiring such property.” This is true whether the taxpayer elects to take 100 percent bonus or 50 percent bonus, as is available during the first tax year ending after September 27, 2017, under IRC § 168(k)(10).

Note: For assets purchased before September 28, 2017, 50 percent bonus would apply to both the boot and the adjusted basis of the relinquished property, although section 179 could only be used to expense the amount of the boot paid.

Of course, after September 27, 2017, taxpayers may continue to elect no bonus depreciation for any class of property. § 168(k)(7). Such election, once made, can be revoked only with the consent of IRS.

How states choose to respond to the new federal tax laws will have large implications for taxpayers. In Iowa, for example, the State legislature has not conformed to federal tax law after January 1, 2015. Additionally, Iowa has chosen not to couple with federal bonus depreciation. This means that currently, Iowa allows a $25,000 Section 179 deduction, with a $200,000 threshold and no bonus depreciation.

It is expected that Iowa and many other states will choose not to couple with the new federal § 179 of $1,000,000 and 100 percent bonus depreciation. Thus, even though federal expensing and depreciation enhancements can help to lessen the blow of the loss of non-recognition of gain on like-kind exchanges for personal property, Iowa law may not. And more use of increased expensing and 100 percent bonus will merely exacerbate the problem down the road. Although Iowa taxpayers can generally expense up to $25,000 and then depreciate an asset acquired in a trade using MACRS, they will likely see significant differences between state and federal taxable income in a year where they must recognize large amounts of IRC § 1245 recapture income because of a trade. This is an issue we are watching closely.

We will keep you posted!