Household Accidental Invaders in the Fall 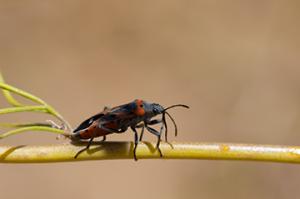 Accidental invaders are insects that inadvertently enter homes and buildings from the surrounding landscape. Many species are troublesome during late summer and fall as they move to protected locations to spend the winter.

Accidental invaders are generally harmless to people and property. They do not feed on people, pets, houseplants, stored products, or furnishings. They cannot sting and they do not carry disease. Accidental invaders cannot reproduce indoors. They are nuisances just by their presence, especially when they occur in large numbers.

Invasion starts during the late summer or fall when insects that developed outdoors accumulate on the exposed southern and western sunny sides of a building. From there they crawl under siding and roofing and into cracks and gaps in foundations and around windows, doors, and similar openings. They may continue to move into the living area of a home or they may spend the winter inside the attic or wall voids.

The invaders attempt to overwinter inside the walls until spring. However, heat from the sun or a furnace can warm the dormant insects so that they resume crawling. Many find their way into the inside of the house and may appear anytime throughout the winter. When warm spring days arrive, these insects become active and attempt to return to the outdoors. Not all succeed and many remain trapped indoors.

The abundance of this common and well-known insect is extremely variable from year to year. Populations are largest following a hot and dry summer.  More information here.


Appearance: Adult boxelder bugs are 1/2 inch in length. The slender body is pointed at both ends and grayish black, highlighted with brick-red markings (three red lines behind the head, a red stripe along each side, and a diagonal red stripe on each wing). The nymphs (immatures) resemble the adults but are smaller, more rounded, wingless, and bright red.

Habits: Adult females lay eggs in early spring (late April–May) on trees, grasses, and other plants. Although the seed-producing boxelder trees are most attractive, maples and other trees as well as flowers and shrubs may be used. The nymphs are bright red when they hatch and they feed on sap from the plants for approximately 60 days. The host plants do not suffer significant damage. New adults appear by midsummer and females lay eggs for a second generation that is present in July and August. The adults that appear in late summer congregate in large masses in preparation for overwintering during cold-weather months.

Boxelder bugs can only feed on liquid food (sap) from the twigs and seeds of trees and shrubs. They do not bite.

This species is originally from eastern Asia or Japan and is present throughout the eastern United States. Dates of first report in the upper Midwest were 1993 (Wisconsin), 1994 (Minnesota), and 1995 (Iowa). Lady beetles cannot bite or sting, although they may give a mild pinch. They often leave a slimy smear and they have a disagreeable odor when squashed or handled.  More information here.

Appearance: Typical ladybug shape (round, domed body) but larger (1/3 inch in length). Color is pale orange with 19 black spots, although some beetles have faint traces of the spots or no spots at all. There is a prominent black “W” shape behind the head on most individuals.

Habits: Lady beetles, including the Asian lady beetles, are beneficial; they live in the landscape, garden, or fields and eat aphids and other insects. This species becomes a pest as a household accidental invader in mid-to-late October. Clusters of lady beetles estimated to be in the thousands accumulate on the outside of buildings. Invaders numbering a hundred or more per day may appear throughout the winter. Reports and complaints of large accumulations of multicolored Asian beetles around homes began recently in Wisconsin (1996), Minnesota (1998), and Iowa (1998).

This large invader also is known as the pine seed bug. It is in a group of true bugs called the leaffooted bugs, named for the leaflike expansion of the tibia of the hind legs. Population size varies greatly from year to year but numbers have been noticeably larger in the 1990s.   http://www.ipm.iastate.edu/ipm/hortnews/2009/11-11/pineseedbug.html

Appearance: Elongate, narrow body appears pointed at both ends and flat on the top.  Length is about 3/4 inch. The bugs are dark reddish brown with a faint white zigzag line across the center of wings. The size, color, and conspicuous antennae give a vague resemblance to cockroaches, whereas large back legs make the appearance somewhat grasshopperlike. Appearance is most similar to the squash bug.

Habits: Western conifer-seed bug nymphs and adults spend the summer on pine and Douglas-fir trees feeding on sap from green cones and needles. This feeding is of no consequence to landscape trees in the Midwest. Adults wander to sheltered overwintering sites as the weather cools in September. They do not normally accumulate in large numbers but rather appear just a few at a time from fall through spring. Pine seed bugs may give off a disagreeable odor.

Iowa's newest accidental invader is the brown marmorated stink bug (BMSB), an introduced, invasive insect first identified in the U.S. in Allentown, PA in 2001, and first reported in Iowa in 2011.  BMSB has been reported from 12 counties in Iowa but is probably more widespread, though at very low numbers.  So far, the only reports of BMSB in Iowa are as a household invader; no crop or plant damage has been reported in the state.  http://www.ipm.iastate.edu/ipm/hortnews/2013/11-1/bmsb.html

Appearance:  BMSB has a shield-shaped body that is characteristic of all stink bugs. The adults are approximately 5/8 inch long with a mottled brownish grey color. ["Marmorated" means marbled, a description of the mottled color on the back.]  The antennae and top of the abdominal segments protruding from beneath the wings have alternating dark and light bands.

Habits: BMSB feeds on sap from a long list of host plants including many fruits, vegetables, field crops, shade trees and other woody ornamentals. In addition to the considerable damage done to crops, gardens and landscapes, the adults have the disturbing habit of migrating to house and other buildings in the fall to overwinter. Homeowners on the east coast describe the stink bug invasion as worse than boxelder bugs and lady beetles, combined!

The preferred management for accidental invaders is prevention; stop them before they enter the house.

Residual insecticide barriers can supplement pest-proofing and may be applied by a professional pest control firm or by the homeowner. Insecticide protection is short lived and may have to be repeated. Homeowners may spray permethrin, chlorpyrifos (Dursban), or diazinon around the home’s exterior. Additional insecticides are available to commercial pest control operators.

Treat the southern and western sides of residences where insects are most common. Apply the insecticide according to label directions to siding, foundation, windowsills, and door thresholds, and to the lawn or landscape for a distance of several feet from the building. Insecticides must be applied before insects begin to enter buildings to be effective (September to mid-October).

Direct application of insecticide to clusters of insects outside on the siding and foundation may reduce the outdoor population and limit the number that will get into the house. Begin spraying as the insects congregate in late summer and repeat as necessary. The insecticides mentioned or a soapy water spray (5 tablespoons of liquid detergent per gallon of water) can be used outside. The soap solution kills only the bugs sprayed. It has no residual effect and does not prevent others from coming to the site.

It is not effective in most cases to treat trees, garden or crops during the summer to prevent accidental invaders. Insects can travel long distances and may come long distances from the surrounding area.

Remove insects that have already entered the home with a dustpan or vacuum. A household aerosol spray containing pyrethrins, resmethrin, or other materials labeled for this use provides some relief but is not a long-term solution to the problem. Aerosol sprays do not control concealed pests. Use insecticides indoors sparingly.

Insects that emerge from overwintering sites inside a home during winter and spring all entered the building the previous fall. They did not reproduce indoors. Unfortunately, there is no practical method to control insects before they emerge.