A new breeding program at Iowa State University is helping farmers looking to diversify their production system. The program, which is being overseen by Arti Singh, adjunct assistant professor in agronomy at Iowa State, is exploring the ways green gram and black gram can be used to accelerate productivity and profitability.

Information about the program and the benefits of green gram and black gram can be found in Iowa State University Extension and Outreach publication “Green Gram and Black Gram: Small Grain Legume Crops for the Midwestern United States.”

Green gram, also known as mung beans, have been grown in the United States and exported around the world since the middle of the 20th century, but growers are dependent on other countries for seeds. 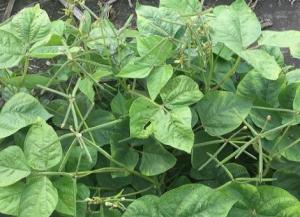 “Currently there are no seeds produced specifically for the United States, and no breeding program to support these crops,” Singh said. “The goal of this research at Iowa State is to start a speed breeding program in greenhouses to create 4-6 generations of the seed per year in order to make fast progress in getting new cultivars.”

The two crops are high in protein and good fatty acids and can be a very high value crop. It is especially attractive to small farmers who want to receive a strong return on investment in a niche market.

“Green and black gram are very similar to soybean,” Singh said. “A farmer who wants to grow green and black gram won’t have to replace machinery to grow and harvest this crop, the most they will have to do is make minor adjustments to their combines.”

Singh’s new publication outlines the new breeding program, discussing the characteristics of the crop in detail. In the summer of 2017, approximately 3,000 accessions of green and black gram were planted to begin germplasm evaluation. These accessions came from all over the world, with seeds native to over 40 countries planted in Iowa. This allowed Singh and her team to see which germplasm lines grew the best in Iowa’s climate and begin targeted hybridizations in 2018. Her team is utilizing modern breeding and genomics tools to develop new cultivars.

“Most of these varieties aren’t suitable to be grown in Iowa,” Singh said. “We are able to weed out those who don’t grow well in Iowa and find the ones that will be best suited to grow here.”