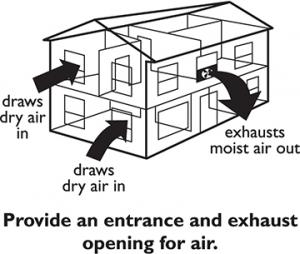 Summer is here, but not everyone is keeping cool by the pool.

Summertime usually means air conditioning systems are working overtime. The U.S. Department of Energy estimates that 6 percent of an average household’s energy use is dedicated to cooling.

But you have ways to keep energy costs down, even when the temperature rises.

“When a small business is trying to cut costs, energy is a low-hanging fruit that people just don’t think about,” says Russ Schell, owner of RJ Energy Solutions in Fargo, who advises small businesses and homeowners about more energy-efficient practices. “If you can save $200 a month, that’s a good savings, especially for a small business.”

Here are some summertime energy-saving tips for homeowners and small-business owners:

When the basement is cooler than the rest of the building, switch the thermostat from “auto” to “fan” mode, which will circulate the cool air without using the air conditioning.

“Sometimes just by moving that from the auto mode to the fan mode, you can cool your house,” Schell says. “It’s cheaper to run that fan than it is to run the compressor on your AC unit.”

Ken Hellevang, a North Dakota State University Extension Service agricultural engineer, adds, “Running the fan on the furnace or the ventilation system will allow you to not only try to equalize the temperature within the house, but it also will eliminate the stagnating air in the lower level.”

A programmable thermostat also will save energy in the summer. Schell indicates a homeowner or business owner may save up to 25 percent in air conditioning energy costs by turning the thermostat 6 degrees warmer for the eight hours or more the building is not in use.

“You must turn the thermostat up for a period of time,” Hellevang says. “If the house sits empty all day, then you may as well allow the temperature to be a little warmer during the day when you’re gone.”

A programmable thermostat enables the system to cool the house prior to your return.

To help the air conditioner operate as efficiently as possible, keep its condenser coils free of grass clippings, dirt and debris throughout the summer. Simply rinse the coils with water from a hose rather than using an air compressor, which could bend the fins.

“If it is 80 degrees outside and we’ve got 130 degrees in the attic, we know that’s going to create a significant heat load back into the house,” Hellevang says. “That’s an indication we need to put in more ventilation.”

Homes and businesses should include 1 square foot of attic ventilation for every 300 square feet of attic floor, according to Hellevang.

“Air needs a path in as well as out, so half of the ventilation should be at the eaves and half near the peak of the roof,” he says.

When outside temperatures drop in the evening, that’s the time to open the windows to let the summer breeze cool the home or use a window fan if the wind is not blowing - unless the evening is humid. Place a fan in a window or door with the fan facing to the outdoors. Seal the rest of the opening with cardboard, plywood or blankets so the fan can create a vacuum that draws in cool outside air through other open windows in rooms you want to cool, such as bedrooms.

“If it’s very humid outside, then we’re probably better off just running the AC,” Hellevang says.

Damp outside air that’s brought into the home will settle into the cooler basement, creating a damp basement during the summer.

“We’re adding moisture to that basement,” Hellevang says. “In the summertime, it is important to watch when we’re bringing in outside air and doing that when there’s dry air rather than very humid air outside.”

Closing shades or curtains during the day is probably the simplest energy-saving idea.

“If you have windows where the sun comes shining in, there can be a significant heat load from the solar energy coming into the house, so closing the blinds or shades to minimize that solar energy is a real plus,” Hellevang says.