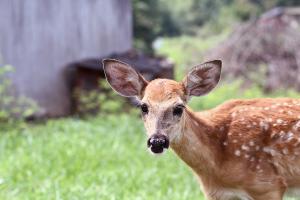 White-tailed deer are as synonymous with the ‘acreage living’ experience as fences and ragweed. We find them everywhere in Iowa, thriving in urban forests and remote sections of cropland with little more than a ditch for cover. To many of us they’re a welcome sight, a glimpse of life on a cold winter day or an opportunity to spend time afield with family and friends each fall in their pursuit. To some they’re an annoyance, pestering crops or landscape plants with their seemingly insatiable drive for fresh plant growth and woody browse. Love them or hate them, one thing is clear: despite their tumultuous experience in Iowa’s earliest years of statehood, white-tailed deer are here to stay and participation in their management and conservation is a core responsibility of all property owners. And today, new challenges like that posed by Chronic Wasting Disease are elevating those responsibilities and require wide engagement in ensuring deer continue to thrive in Iowa.

There are four notable chapters in the history of white-tailed deer in Iowa. The first chapter played out prior to widespread European settlement and commenced at Iowa statehood in 1846. Prior to this period, deer were abundant and competed with elk, bison, wolves, mountain lions, and Native Americans for food, space, and survival. As European settlers began to arrive in abundance during the mid to late 1800s, this balance shifted, transitioning into the second chapter. This chapter was defined by unregulated and unsustainable harvest and widespread loss of habitat due to land conversion, resulting in deer being driven to extinction in the state by the turn of the 20th century. Fortunately, motivated conservationists worked hard in the early 1900s to ensure that this dark chapter wasn’t the last. According to James Dinsmore’s 1994 book A Country So Full of Game, by 1936 around 500 deer, protected by state laws, had found their way back into the state. Ten years later the number was over 1,600 deer and by the 1950s, an estimated 13,000 deer were back in the state, prompting the legislature to reopen the deer hunting season in 1953 after a 55 year hiatus. With this, the third chapter in Iowa’s deer history was closed, righting wrongs of the late 1800s and restoring deer for the enjoyment of all Iowans.

Progress on restoration of deer populations continued throughout the late 20th century, transitioning deer from rarity to ubiquity and transitioning the responsibility of citizens and government leaders from restoration to management. That chapter brings us to today, when annually thousands of Iowan’s participate in deer hunting traditions harvesting over 100,000 deer.  This fourth chapter of Iowa’s deer history has been one of celebrating successes and learning to live in harmony with one of Iowa’s most adaptable and largest mammals. In this process, Iowa has earned a national reputation for its capacity to produce abundant, trophy deer, attracting hunters from across the country each fall to support local economies and enjoy Iowa’s natural resources. Thousands of Iowans participate in the annual harvest as well, securing a supply of healthy and locally produced meat to feed their families throughout the year.

All indications are that this most recent, positive chapter in Iowa’s deer history has many pages still to be turned. However, new challenges are on the horizon, necessitating that we stay vigilant and engaged in deer management and conservation to ensure one successful chapter doesn’t give way to a new, more challenging one.  One primary threat for deer and all Iowa landowners is the threat posed by Chronic Wasting Disease.

Chronic Wasting Disease or CWD is a neurological disease that affects white-tailed deer and other members of the deer family. The disease is in a curious class of diseases that scientists still struggle to fully understand called Transmissible Spongiform Encephalopathies (TSE). Unlike more common ailments associated with viruses or bacteria, TSEs infect animals with a misfolded protein or prion that, when not misfolded, is benign. Misfolded prions accumulate in an individual animal and erode the function of the central nervous system eventually leading to holes in the animal’s brain. In the case of CWD, these holes eventually lead to a literal wasting away of the animal’s function until death. Of course many diseases can kill deer, and in most cases these disease don’t pose any real threat to populations or people. However, because of the complexity of TSEs, CWD is cause for extra caution.

Today, CWD has been documented in three Iowa counties – Wayne, Allamakee and Clayton – as well as in each neighboring state. Experiences in neighboring states has shown that once CWD is present in a deer population, it’s functionally impossible to remove and tends to become more prevalent over time. Once in a deer population, the only management strategy thought effective is to reduce densities of deer to try to discourage movements of sick deer away from the site and minimize transmissions of the disease to healthy deer.

Given the limited distribution of CWD in Iowa today, the best strategy for addressing CWD is to minimize its rate of spread across the state. Recall the old adage: an ounce of prevention is worth a pound of cure? In this case, because there is no prospect for ‘a cure’ we need a pound of prevention too. So here’s some suggestions on what everyone in Iowa can do to lend a hand.

What can landowners do to help?

What can hunters do to help?

The history of deer in Iowa is one to both learn from, and in many respects be proud of. However, the core lesson from the earliest European experience with deer is that vigilance and sound management are essential to the sustainability of this natural resource. Today, in an ever changing landscape with the emerging threat of CWD, that lesson rings truer than ever. Vigilance, engagement, and coordination between hunters, landowners, farmers, and the government agencies responsible for leading the stewardship of deer populations in Iowa and throughout the Midwest will be critical if the rich history of Iowa’s deer population and all the cultural, aesthetic, and economic value they yield is to continue to thrive for future generations to enjoy.