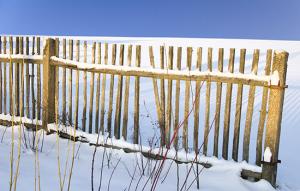 With winter just around the corner, snow fences are going up in anticipation of the snows that will surely come. Snow fences are just one of the ways to control drifting snow. To make sure they do the job right without creating more problems, they must be properly placed.

Strong winds and steady snowfall make for a lot of drifting snow. But lots of snow moves in strong winds without falling snow, if there's enough snow on the ground and it's not too icy. However, this snow can't blow forever. Even though it is hard to imagine, snow is evaporating as it is blown along. In fact, it is very difficult to blow snow more than several miles before most of it evaporates. Thus you don’t have to store all of the snow in the county, but good planning can help you deal with the snow that will come.

Most snow blows through a good snow fence. Downwind of the fence, the wind slows and drops the snow. The better the snow fence, the more snow it takes from the blizzard. Research shows that the best snow fences are about half solid and half openings. We say that's a 50 percent porous snow fence, it lets the blizzard through, but it still slows the wind.

Wyoming research shows that fences with 50 percent openings first form drifts just downwind of the snow fence. Gradually the drift fills in further and further downwind. A majority of the snow is stored in the first distance about 20 times the snow fence height. However, in a severe winter, drift lengths can reach up to 25 to 30 times the fence height as shown in the figure below.

In the past, wooden picket fences were often used for snow fences. These worked fine but today plastic snow fence material is more commonly used because it is lower in cost and lighter weight. There are differences in quality of fencing materials. Those plastic fences designed as safety fences are not made as heavy as plastic fences specifically designed for snow fence.

If the distance between the fence and road to be protected is less than 30 times the fence height, then the snow drift may reach the road. That can make a drift problem worse, instead of eliminating it. Fences with less open area will have shorter drifts (10-15 times the fence height) but will also store less snow. For best results, keep a 4 ft. snow fence back at least 80 ft. and preferably 120 ft. from the road or driveway you want to protect.

Following are some tips for proper snow fence installation:

A longer term solution to drifting snow includes building up roads and driveways so that snow is blown across rather than drifting on to them. By elevating driveways above the surrounding terrain, wind will sweep snow off of the roadway. Usually the roadway should be 1-2 feet higher than the nearby landscape to make this effective.

Also, living snow fences of evergreens and shrubs can be planted to provide a permanent snowfence. Make sure that they are planted well back from the areas they are meant to protect. A good rule of thumb for Iowa is to allow 100-150 ft. for trapping of snow between the living snow fence and area to be protected.

Keep grass and weeds alongside roadways mowed down in the fall. This vegetation can act as a mini snow fence creating drifts right on the roadway. Leaving cornstalk stubble undisturbed will trap a great deal of snow out in the field and minimize the amount of snow that can drift onto a roadway.

Anywhere there is an obstruction, snow will drift. By strategically placing or removing these barriers, we can minimize problems from drifting snows.

Additional information can be found at:
https://www.extension.umn.edu/environment/agroforestry/components/UMN-Ext...