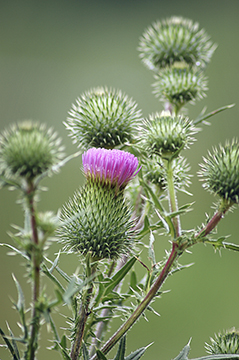 Biennial thistles are commonly found in Iowa's pastures, roadsides, CRP and other un-tilled areas.  Musk (Carduus nutans ) and bull (Cirsium vulgare) thistle are exotic species (originate from outside of North America) and are responsible for the majority of problems caused by this group of plants.  Tall ( Cirsium altissimum), Flodmans ( Cirsium flodmani) and field thistle (Cirsium discolor) are native to Iowa and far less prevalent than musk or bull thistle.  Although all species in the Carduus and Cirsium genera are classified as noxious weeds by Iowa's Noxious Weed Law, the less common, native thistle species rarely invade managed areas at densities that crowd out desirable plants or interfere with human activities.

Musk thistle is the most prevalent and invasive of the biennial thistles.  Rosette leaves of musk thistle usually have silvery margins that simplify identification.  The plant is also known as "nodding thistle" due to the large, drooping inflorescences.  Bull thistle has prominent, sharp spines on each of the leaves narrow, pointed lobes.  The undersides of tall and field thistle leaves are hairy and white, with field thistle having leaves more deeply divided by numerous lobes. 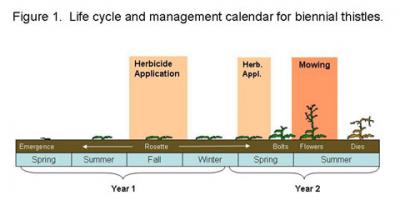 Biennials require two years to complete their life cycle (Figure 1). Seeds typically germinate in the spring or early summer. In the first year of growth, the plant forms a cluster of leaves at the soil surface (rosette). The following spring the stem elongates (bolts), producing an erect flower stalk. The plant dies in late summer or early fall after seed have matured. A small percentage of the population may act as annuals and produce flowers the same year they emerge. These plants typically are smaller and flower later in the year than plants that act as biennials.

Biennials only reproduce by seed, and individual plants die after seeds mature. Canada thistle is the only perennial thistle species prevalent in Iowa, and it reproduces both by seed and vegetative root stalks. Biennial thistles are much easier to control than Canada thistle due to the lack of perennial root systems.

All thistles produce an inflorescence composed of many small flowers in a compact head. Musk thistle averages approximately 50 heads per plant with each head producing several hundred seed. Each seed has a cluster of soft bristles (pappus) attached to the tip. The role of the pappus in many plants is to aid in the wind dispersal of seeds. However, thistle seeds are relatively large and thus poorly adapted for wind dispersal. For example, a musk thistle seed is approximately 6 times larger than a dandelion seed. In addition, the pappus on most thistle seeds detaches from the seed prior to the seed leaving the seed head. Thus, although a few seeds may be carried long distances by wind, the majority of thistle seeds fall within a few feet of the mother plant. Thistle seeds are consumed by birds which may transport the seeds long distances.

Fall treatments are very effective against established rosettes, and can be made after several frosts have occurred. Spring treatments should be made prior to bolting since thistle tolerance increases greatly after bolting has initiated. Grazon P&D and Milestone provide more consistent control of thistles that have bolted than other treatments, but treatment costs increase since higher rates are required. A potential advantage of spring treatments is they can control both second year rosettes and first year seedlings, whereas fall treatments typically only control rosettes that established earlier in the spring.

Caution must be used when applying any herbicide to avoid off-target movement that may damage susceptible vegetation in adjacent areas. All listed herbicides will kill any legumes present in pastures.

Herbicides work best when used in combination with other control strategies. Due to persistent seed banks, biennial thistles are likely to reinfest treated areas. Enhancing the competitiveness of the desirable vegetation and implementing appropriate follow up tactics will provide economical long-term management of the biennial thistles.

For more information, check out these publications from the Extension Online Store on weeds and weed control and this one on small sprayer calibration.