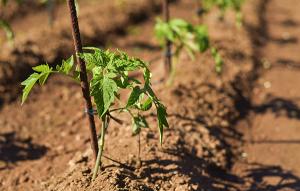 Tomatoes are found in nearly every high tunnel and for good reason.  The demand for fresh market tomatoes is incredibly high nearly all year, creating high prices during off-season production for locally grown fruit.  Tomatoes grown in high tunnels will out yield those grown in the field due to fewer diseases such as septoria or early blight and have fewer culls from cracking or splitting.  The overall quality of tomatoes grown in a high tunnel is significantly better than tomatoes grown in a field as they have the perfect appearance of greenhouse grown fruits but at a fraction of the initial infrastructure investment.  It should be no surprise, then, that tomatoes are often grown in high tunnels each year with no crop rotation to break up disease cycles.  While it is not ideal or recommended from a production standpoint to grow tomatoes in a high tunnel every year, many farmers chose to do so due to market requirements and profitability.  The value of tomatoes for many farmers is greater than the risk associated with plant disease outbreaks caused by a monoculture system.  For farms that choose to grow tomatoes every year in their high tunnels, there are steps that minimize risks of growing in a monoculture cropping system.

One of the easiest steps farmers can take to minimize risk of pest outbreaks in a monoculture system is to prevent pathogens and insects from overwintering.  At the end of the growing season, remove all old plant material including root balls that provide places for pests to survive on and discard it.  Do not use the high tunnel as a place to overwinter pet plants, transplant trays, or media as these can all harbor pests.  In addition, thoroughly clean and sanitize all surfaces to remove any remaining plant and soil residue.

Another tactic to prevent disease outbreaks is to grow varieties resistant to common pathogens.  Hybrid varieties available from breeders generally have resistance to fusarium, verticillium, and many other pathogens.  However, until recently, resistance was not available for bacterial wilt, another common disease found in soil.  New cultivars are just on the edge of entering the market that will provide further protection to plants.  Another common disease on tomatoes commonly seen in high tunnels and greenhouses but not in the field is leaf mold.  Several of the determinate tomatoes that are frequently grown in greenhouses such as Trust and Big Dena have leaf mold resistance, but most indeterminate types do not.  For those that grow heirloom varieties, grafting is used to provide resistance to root diseases by growing the heirloom fruits on the root system of a hybrid variety, or rootstock, that has desired disease resistance.  This procedure is not for the novice growers as careful timing, a sterile grafting space, and healing chamber are required.  Try grafting just a few plants the first year for practice and to observe the differences in growth rates of various rootstocks.  Pre-grafted transplants are available for purchase for a premium price.  For more information on tomato grafting, see the Sustainable Agriculture Research and Education (SARE) publication Tomato Grafting for Disease Resistance and Increased Productivity.

Following other good horticulture practices also helps prevent diseases from establishing.  Add organic matter to the soil at the end of each season such as compost, manure, or cover crops to rebuild soil biology.  The organic matter will feed the beneficial microbes that create a healthy soil and in return diminish the ability of pathogens to grow and survive.  Manure brings the risk of human pathogens such as e. coli and salmonella and should always be applied and incorporated into the soil during the fall.  Tools used to handle manure should always be washed and sanitized before being used elsewhere on the farm.  Treated compost is much safer to use than manure as the composting process kills pathogens harmful to humans.

Cover crops are advantageous because they add both organic matter to the soil as well as introduce a new species to the rotation breaking up the tomato on tomato pattern.  Short duration cover crops such as oilseed radish or yellow mustard can be planted before or after tomatoes with minimal effect on the tomato crop.  For more information on using cover crops in vegetables, see Short Duration Cover Crops for Vegetable Production Systems at https://store.extension.iastate.edu/product/14481 and Cover Crops in Vegetable Production Systems at https://store.extension.iastate.edu/product/14318.

Some farms choose to avoid the problems associated with monoculture cropping altogether by switching from growing in soil to growing in media bags that are discarded at the end of the season.  Grow bags have the advantage of being well drained and easily replaced annually.  Typically, they are comprised of coir, compost, peat, mulch, or other artificial media and are essentially a hydroponic system.  They require frequent irrigation and must have 100% of the plant nutritional needs supplied in addition to correcting the water pH.  Growing in bags is very different from growing directly in the ground.  Problems can quickly compound and be more severe.  If growing in bags is too big of a jump, some farmers will remove the upper 6 inches of soil and replace with fresh, new soil that has not previously had vegetables grown in it.  This process introduces new problems.  The heavy equipment necessary to accomplish this can cause significant compaction issues that must also be managed.  In addition, it takes a few months for soil pH and potassium availability to stabilize which can lead to abnormal nutrient deficiencies the first year post soil replacement.  Finally, some farms will completely disassemble the high tunnel after 5 to 10 years and move it to a new location that has not had vegetables recently grown on it.