The Beauty of Basil 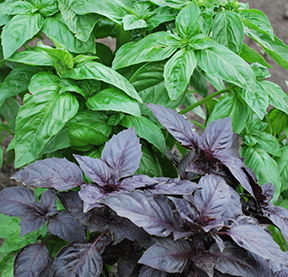 Basil (Ocimum basilicum) has long been considered the “King of the Herbs” – not only because of its popularity, but also because the name “basileus” literally means “king” in Greek.  Basil is native to parts of Asia and Africa. It is thought to have been brought to ancient Greece by Alexander the Great from India.  Basil has a long history of cultivation around the world and has been used as a culinary herb, aromatic herb, and ornamental herb for centuries. There are many, vastly different, religious legends and symbolisms associated with basil.  In India, Hindus once buried holy basil (Ocimum tenuiflorum) leaves with their dead to help them get into heaven.  It was once thought in Italy if a man accepted a sprig of sweet basil from a woman; he would fall in love with her.  In the 1600s, the English hung basil in doorways to ward off unwanted insects and other pests like evil spirits. Basil has also been considered a good luck charm in some folklore and a symbol of hatred in others.

Today fresh or dried basil is a featured ingredient in pesto, soups, salads, and numerous pasta dishes.  With such a high demand for fresh or dried basil, knowing how to grow and harvest your own has many advantages. Fortunately this popular herb is relatively easy to grow in the home garden.

Basil is grown as an annual herb in Iowa – meaning that seed are sown each spring for the current season’s crop.  Seed can be sown indoors or directly in the garden outdoors. Seed usually germinates in 7-10 days.  Basil is sensitive to cold temperatures so it should not be sown or planted outside in Iowa until mid to late May. Seed sown indoors should be started 3-6 weeks prior to transplanting outside. Sowing seeds indoors hastens the process so you have harvestable plants sooner compared to directly sowing seed outdoors.   Like most herbs, basil prefers sunny locations with well-drained soils.  Regular watering during establishment is important for good growth and development.  Basil is fairly drought tolerant once established. The application of fertilizer once or twice during the growing season will keep basil growing well and producing new leaves.  Avoid overwatering or over-fertilizing as this will produce weak, spindly growth and can often lead to rotting of the roots and death.  Basil benefits from proper spacing with plenty of air-circulation between plants as this reduces the incidence of disease.

Basil also performs well in containers, both indoors and outdoors.  When planted in containers, be sure to use a well-drained, soilless potting media and place the containers in a bright, sunny location.  It should be noted, however, that basil grown indoors can be less flavorful than basil grown outdoors.

Harvest basil leaves and stems early in the day.  Try not to remove more than ½ of the plant at any one harvest.  This allows you to harvest more, newly developed basil leaves in 2-3 weeks.  Fresh cut stems of basil will last for a couple of days in vases of water on the kitchen counter.  For peak flavor, harvest before the flower buds form.  While basil flowers are also edible once many herbs begin to flower the taste changes slightly – sometimes becoming bitter. Many gardeners will continually remove flower buds as they form to extend the harvest season.

If more basil was harvested than can be used, consider preserving the remaining basil by drying or freezing the leaves. To dry basil, tie together small bundles of stems with leaves and hang them upside down in a dark, warm, well-ventilated location for a week or two.  Once the leaves have dried they can be crushed and stored in clean, air-tight jars at room temperature. To freeze basil, remove the leaves from the stems and chop them in a food processor with a small amount of oil or water.  Pour the bright green mixture into ice-cube trays to freeze.  This way you can thaw small quantities of basil when needed for pesto, pasta dishes, soups, or stews. Both frozen and dried basil should keep for a year.

Basil is in the genus Ocimum and is a member of the mint family called Lamiacea.  And like mint, there are several different basil species identified (30-60) and many more cultivars (cultivated varieties) commonly available to consumers. Many of these cultivars of basil grow well in Iowa.  While all cultivars require the same growing conditions, there can be big differences in appearance and taste.  The sweet or Genovese type basils are the most popular culinary basils.  These are the cultivars with large, 2-4 inch long leaves commonly used for salads, pesto and other Italian dishes. For a slightly different taste, consider the lemon, Thai, or cinnamon basils. For ornamental (and edible) basil, consider the dwarf, bush type or purple-leaf basils.  In fact, consider growing more than one type of basil in the garden.  They all make attractive and tasty additions to the landscape!