Agroforestry on the Farm: Elderberry 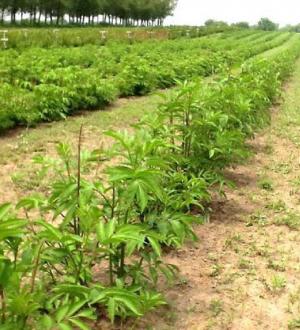 The American elderberry (Sambucus Canadensis) is a multi-stemmed bush that is just beginning to be grown commercially in the Midwest, where little research has been done. The health benefits, coupled with improved cultivars that are showing consistent yields and quality, are getting growers interested in elderberry. Even more significant, marketing channels are developing, and a product line exists that uses Midwestern-grown berries, indicating an emerging market.


Elderberry grows wild throughout the eastern United States, as well as the Midwest, and can be seen along roadsides and rivers. It thrives in moist areas and can be grown in riparian situations. Similar to aronia berry, elderberry is also referred to as a "superfruit' due to its high level of antioxidants and associated health benefits. However, unlike the aronia berry, elderberry can be eaten right off the bush and has a sweet taste. Thus, they can be marketed fresh or in you-pick operations.

What you need to know

Several cultivars are available to growers inthe Midwest. Most were developed in New York or Canada before 1960. More recently, the University of Missouri has released improved cultivars of American elderberry selected from the wild in Missouri and Oklahoma. Researchers continue to look for plants with large berries, high yields, and favorable growth traits.

Adams and Johns are cultivars from New York while Bob Gordon and Wyldewood are from Missouri and Oklahoma. It is not known how the more southern cultivars will grow in more northerly climates; therefore Adams and Johns should be considered for planting north of Interstate 80 in Iowa with other cultivars planted experimentally.

The largest berries grow on new shoots, wlth smaller berries forming on the previous year's growth. Cultural practices In Missouri are to cut the bush down after harvest and grow new shoots every year. This has several benefits. First, it produces larger but fewer overall clusters of berries, making harvest easier and quicker. Second, it helps to narrow the ripening window. Instead of taking 4-5 weeks to ripen and harvest, the process can be completed in 3-4 weeks. This is significant because harvesting requires multiple passes through the orchard. Finally, pruning to the ground every year results in a more uniform height of stems, which could facilitate future mechanized harvesting. Cultural practices in northern climates are being studied to determine if cutting the entire plant down is feasible, or if an alternative pruning regime will be needed. Alternate pruning regimes include complete removal every other year, selective pruning of the largest stems, or not pruning at all.

Elderberries have many uses including juice, jelly, medicinal products and more. They are flavorful and can be marketed as a fresh berry or frozen for later processing. Few processors exist in the Midwest to utilize elderberries. One company, River Hills Harvest, buys berries from member growers and markets a line of elderberry products including juice, jelly, and herbal cordials.  Similarly, a group of growers in Minnesota has formed the Minnesota Elderberry Cooperative to aggregate berries from member growers, market their own line of products, and serve larger institutional buyers. For those growers not interested in direct marketing their berries, these are two marketing channels to consider. 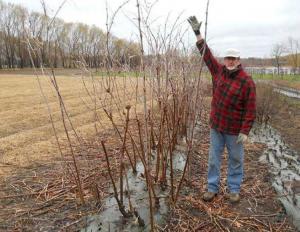 Things to keep in mind

Elderberries can beaffected by insects including stem borers, elder borer, sawfly, Japanese beetle, and the Spotted Wing Drosophila (SWD). Of all these, SWD is of the most concern. The female fly will lay eggs in soft-fruited berries, damaging the fruit. When infestations occur, a single female can lay more than 100 eggs ina day, ruining entire crops.SWD has not been found in Iowa, although it has been found in Missouri and Illinois and is slowly inching into Minnesota and Wisconsin. Fungal and bacterial leaf spots round out the list of diseases affecting elderberry plants,although distribution does not seem to be widespread.

Elderberries for commercial production require moist but well-drained soils with plenty of sunshine. If drainage is not adequate some growers plant on a raised berm. Because they prefer moist conditions, elderberries can thrive in riparian areas but should not be planted where flooding occurs regularly.


Soil pH should be 55-6.5, and weed control should be implemented through mulch, landscape fabric, hand weeding, or any combination that provides adequate management. Elderberries don't compete well with grass and weeds. Northern varieties are cold tolerant but be mindful of good air drainage so that late spring frosts don't reduce yields.

The accompanying worksheet outlines many of the assumptions used in the economic analysis. The figures are based on feedback received from growers as well as estimates when needed. It should be noted that little long-term data is available for elderberries in Iowa. Ranges are given for various expenses to reflect differences in materials and management.


Expenses fall within three main categories :establishment, maintenance, and harvest. For elderberries, establishment is a very significant cost estimated at just over $5,200 per acre. Major expenses during establishment include weed barrier, planting stock, irrigation, and mulch.


Annual maintenance costs are relatively low and represent mostly labor for mowing, weed control, and pruning. The assumption is that bushes are cut down to the ground every year. Mulch is reapplied every 5th year. Fertilizer is estimated at a $100 per acre.


Harvest costs are another significant expense and are somewhat proportional to the yield. Elderberries are hand harvested with the entire berry cluster cut from the bush when all the berries are ripe. Cold storage was estimated at $5,000 for a walk-in freezer amortized over the first 10 years.

A 20-year financial model was developed  using the worksheet and input from existing growers. It assumes an ideal site, with irrigation. Based on the model, a grower might expect to see a positive annual return in Year Six of $1,364.65 (annual income exceeding annual costs). Breakeven is possible by Year 13 with solid annual returns thereafter.


As the financial model depicts, a grower could reasonably expect to generate a total profit of almost $10,000 over those 20 years, with the bulk being generated in Years 13 through 20. This equates to an average annual return of $493.20 per acre.

Elderberries have serious potential as a commercial crop in Iowa, although more research is needed on cultivars, pruning regimes in colder climates, and validation of yield estimates. Initial demand looks promising and existing marketing channels are emerging with River Hills Harvest and the Minnesota Elderberry Cooperative. For those growers looking to direct market, berries can be sold fresh or frozen for juicing, baked goods, candies, etc. Compared to other perennial crop options, elderberries have a higher risk because of limited data for Iowa, but the reward can be high as well if a market can be secured.

The Center for Agroforestry at the University of Missouri - https://centerforagroforestry.org/

The Center for Agroforestry at the University of Missouri, established in 1998, is one of the world's leading centers contributing to the science underlying agroforestry, the science and practice of intensive land-use management combining trees and/or shrubs with crops and/or livestock. They have done research on elderberries including market assessments and best management practices and offer an elderberry financial decision support tool.

River Hills Harvest is a source for elderberry information ranging from the health benefits of elderberries to production and processing information. They are also a supplier of rootstock to new growers and elderberry products to the general public.

The Minnesota Elderberry Cooperative consists of growers from Minnesota and other states that recently completed a feasibility study showing potential for buying and marketing berries. They also host a website with lots of useful information on the health benefits of elderberry as well as production information and links to other useful sites. 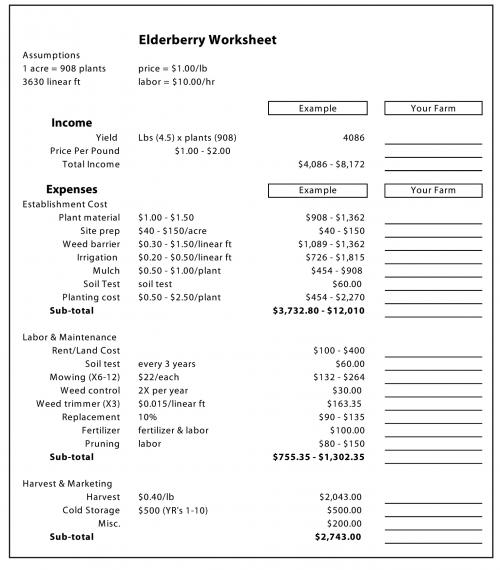