Agroforestry on the Farm: Chestnuts 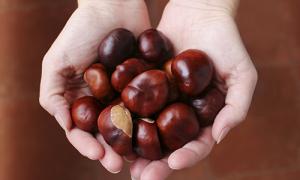 After John Wittrig’s father passed away in 1983, John took a more active role in managing the family’s Iowa farm, even though John and his wife Betty lived and worked in Illinois. For the first five years, he split his time between his fulltime employment, managing the farm, and learning more about being a land steward.

One day, John attended a Forestry Field Day and one of the presenters offered participants a bowl of fresh chestnuts and asked the group if any of them had ever eaten native chestnuts.  John remembered eating chestnuts on State Street in Chicago around the holidays and had not been impressed with the quality and taste.  However, when he tried the local chestnuts, they tasted far better than those chestnuts he had eaten years before and he immediately started learning more about how he could start growing chestnuts on the 4.5-acre property John and Betty had recently purchased in Winfield, Iowa.

The Wittrigs contacted Tom Wahl of Red Fern Farm in Wapello, Iowa, as he had been a good resource for how to grow chestnuts and a known source of seed.  Tom supplied them with 35 Michigan seedlings (non-grafted) as well as 279 seedlings from a local chestnut tree Tom had discovered near his farm.  The Wittrigs planted their chestnuts in October 1993.

John spaced his chestnuts in a 24-foot-by-24-foot grid.  He seeded a cover crop of clover and timothy and mulched around each seedling. Because he knew chestnuts are susceptible to the cold, he established a windbreak of pines along the north and west side of the property.  He also used tree tubes to protect all the plants. “I first used 15-inch tree tubes,” John said. “Then the district forester stopped out and told me that after the first heavy snow the rabbits would hop up the snowbank and nibble the tops off all the seedlings, so I replaced them all with two foot tall tree tubes.”

Mowing and mulching were the primary modes of weed control during the early years.  As the trees grew and the canopy filled in, the trees shaded out other plants in the orchard, reducing the need for mowing and mulching greatly.  Chestnut burs carpet the ground under the trees, but are chopped up with subsequent mowings.  John pruned the young trees removing lower hanging branches to allow for easier mowing, but has had not had to prune since.

Four years after establishment, John began harvesting small amounts of chestnuts, only 10-12 pounds that first year.  However, it didn’t take long for the volume to grow.  The second harvest yielded 40 pounds; the year after that, the harvest was 400 pounds.  His largest yield to date was 6,000 pounds several years ago and last year, in 2013, the orchard yielded just under 4,000 pounds.  “Yield really depends on the spring weather,” John said. “Late frosts after flowering can absolutely ruin a crop.”

Harvest takes place during a six- to seven-week window.  Nuts must be harvested daily to ensure quality.   The prickly burs fall from the tree and the chestnuts inside are picked up, either by bending over or using a tool called a Nut Wizard.  Nuts are then sorted, removing any damaged or poor quality nuts.  Small nuts, less than the diameter of about a quarter in size, are segregated and sold separately.

The Wittrigs employ a crew of high school students and seasonal help to gather, sort, and store the nuts in coolers.  Pickers are paid $0.60 per pound.  At the height of harvest, six to fifteen pickers will be busy gathering nuts and getting them ready to package.

Early on, John decided to grow the chestnuts organically.  “Growing chestnuts without chemicals by organic methods is fairly simple,” says John. “And it gets us a nice price.”

The Wittrigs were not confident at first that their trees would produce chestnuts, and they had no idea how to market the nuts. “I didn’t know how to sell them,” John said, “and we didn’t know who would buy them, but going organic helped me a great deal.”

Today, John sells his organic chestnuts for $6.00 per pound and sells the whole crop every year, typically to repeat customers.  Most of his chestnuts are sold directly to consumers, who John stays in touch with, mailing a letter every year letting customers know how the growing season went and what he has available for purchase.

John also sells his chestnuts in several food co-ops in Iowa, Wisconsin, Minnesota and even in New England and Florida.  In Iowa, J & B’s Chestnuts are sold in New Pioneer Co-op in Iowa City and Coralville, as well as at Everybody’s Whole Foods Store in Fairfield.

Quality is important to John and he feels that it has given him a good reputation that keeps customers coming back.  He packages the chestnuts in double-lined brown paper bags, which he says he learned from a Korean woman who came to the farm many years ago and shared with John how chestnuts were stored for long periods of time in her home country.  He’s been packaging the chestnuts this way ever since.

John has much advice for new growers looking to start growing chestnuts.  First, he says, is to figure out who the market is, who is the grower going to sell to.  High-quality chestnuts are in demand, but customers want the highest quality, and to get high quality nuts you have to harvest every day throughout that a six- to seven-week period.

Handling and storing chestnuts is equally important for quality.  Because the orchard floor is primarily dirt due to the lack of vegetation under the dense canopy, when it rains the nuts tend to get dirty and muddy.  These nuts need to be sanitized in a weak bleach solution and then rinsed thoroughly before storing.

Another practical piece of advice from John is plant spacing. “If you use seedlings,” he says, “plant rows 40 to 45 feet apart and then space your plants within row at 8-10 ft.  Run your rows north and south and they will get plenty of sunlight, then come back later and cull out any poor or damaged plants.”  This will allow for quicker and higher yields.