Agroforestry on the Farm: Black Walnuts 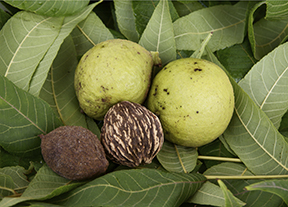 When Bill and Geri Hanson purchased their farm northeast of Centerville, Iowa, in 1974, they were interested in growing black walnuts.  After visiting California and seeing the commercial English walnut fields, Bill was intrigued by the “California model” — rows of trees that are cultivated, well taken care of, and produces lots of nuts.  He felt that if growers could make money growing English walnuts in California with the high price of land and high irrigation costs, he could make money growing black walnuts in Iowa.

Their first attempt with several thousand plants ended in disaster due to some poor advice, but the Hansons’ dream did not die.  In the early 1980s, the Hansons met Archie “Mr. Black Walnut” Sparks, president of the Iowa Nut Growers Association and an expert in growing black walnuts.  Archie agreed to graft 50 trees and make the correct selections for the Hansons.  He provided Bill and Geri proper instruction in setting up the orchard, and in the spring of 1983 the Hansons established their first 50 trees.  “Archie was really intelligent and knew the best cultivars for early-, mid-, and late-ripening,” Bill said.

They planted six different cultivars with staggered ripening times to mitigate risk and spread the harvest over a longer timeframe.  Grafted seedlings were planted 25-feet on center. Cultivars are grafted to native seedling rootstock for commercial production because of the superior traits and quality of cultivars compared to wild black walnuts.  The shells of the wild black walnut tend to have thick shells that yield only 12-20 percent nutmeats and rarely yield whole quarter-pieces.  Thin-shelled cultivars, on the other hand, can yield up to 36 percent nutmeat with a considerable percentage of whole quarter-pieces.

Limiting competition from weeds and grass is crucial for better yields and quality.  Bill controlled weeds in the early years by lightly tilling the soil about an inch deep.  As the trees grew, Bill sprayed a 10-foot-wide band with herbicide to kill the grass and maintains this practice today.   Bill also mows between the trees with a flail mower, which helps to groom the orchard floor for harvesting.  Although he no longer tills the orchard, Bill firmly believes doing an aeration pass once every three years can help to increase biological activity and improve soil health.

Bill recommends a very specific fertilizer and spraying regimen to ensure good annual yields and minimize pest and disease issues.  Early in the spring, he broadcasts potash and phosphorus, approximately 70 pounds per acre each, and 60 pounds of nitrogen per acre, along with roughly four pounds of sulfur and a half pound of boron.  The exact rate is determined by soil testing and tissue samples.  In the fall immediately following harvest, another 40 pounds of nitrogen is broadcast on the orchard floor.  As soon as the buds break, Bill sprays with a combination of nitrogen and zinc nitrate in foliar formulations.  He points out to use zinc nitrate and not zinc oxide.  Approximately two weeks later, a second foliar application is applied, and this time an insecticide is included if needed to control for curculio, a pest that can ruin the nuts.

The third foliar application includes a fungicide for anthracnose damage, typically the first week of June. Black walnuts are notorious for anthracnose damage; it causes them to lose their leaves in the middle of August, thus reducing the trees’ ability to convert sunlight to energy.  Anthracnose damage occurs in mid-June, so spraying the first week of June tends to protect the crop.  “One application,” says Bill, “and you will have green leaves till frost.  If you want a full crop every year, that’s the regimen to follow and it works, year after year.”

Harvesting starts in early September when nuts start to fall from the trees.  The nuts are ripe and ready to harvest when a thumb pressed into a green husk leaves a dent.  For some of the harvest, Bill uses a hydraulic tree shaker to slightly vibrate the tree, forcing the nuts to the ground.  However, experience has shown that early ripening varieties should not be vibrated with a tree shaker as the bark of these varieties is not “tight” and can be damaged. Bill also drives a modified Lockwood pecan harvester over the orchard floor to sweep up the nuts while blowing dirt, sticks, and other “trash” out the back of the machine.  A Nut Wizard is used to collect nuts in places that are difficult to reach for the larger machine.

Once collected, the nuts are hulled to remove the green or brown husk, and then are washed, sanitized, and dried using fans.  This slow-drying process, using only ambient air, keeps the nuts from cracking, which reduces the possibility of contaminants spoiling the nutmeat.  Once dry, the nuts are allowed to “settle” or “cure” for about two to three weeks prior to being stacked in mesh bags with further ambient air drying at 70 degrees or lower until ready for cracking.  The black walnut nutmeat loses its “green off taste” and attains the distinct black walnut flavor during the curing process.

There are several potential markets for both wild black walnuts and the nuts from cultivars. Hammons Products Company, based in Stockton, Missouri, purchases wild black walnuts to process into a wide array of products, from nutmeats for baking, ice cream and candies to using black walnut shells for sandblasting and oil drilling. Hammons purchases the native nuts through its network of over 200 buying stations spread across fifteen states.  Prices paid to nut collectors are typically in the $0.07 to $0.10 per pound range.  The nut-buying stations hull the nuts before sending them to the main processing plant in Missouri for further cleaning and shelling. Cultivars demand a higher price because of the superior quality and higher percentage of usable nutmeat, typically $0.50 per pound.  The nice big pieces are used for candies, baking, and even eaten raw, much like almonds, pecans, and other such high-protein snack nuts.

While native black walnuts are widely known as being difficult to crack and tedious to pick out the nutmeats, black walnut cultivars are much easier to shell. Heartland Nuts ‘N More in Valparaiso, Nebraska, is a co-op that processes and markets only high-quality cultivar black walnuts and northern pecans.  By using a commercial nut cracker and electronic sorters, the co-op recovers close to 90% of the nutmeats. Bill says that on good sites, trees that have been well cared for can start producing in year five, and years six and seven can see some nice yields.  At full production on good sites, 1,500 to 2,000 pounds are possible per acre each year.  Selling cleaned dried nuts at $0.50 per pound yields a gross of $750 - $1,000 per acre.  Direct marketing black walnuts are also a possibility, with retail prices per pound consistently exceeding $12.

“We were pretty discouraged after the first planting essentially ended in total failure,” said Bill.  However, once they got in touch with Archie Sparks and the Iowa Nut Growers Association, it was a night-and-day difference.  The organization’s members have a wealth of knowledge and wisdom and can help new growers avoid common mistakes, saving them time and money. Bill also stresses that site selection is the most critical factor in achieving consistent yields.  “You must have a site that is well-drained,” Bill says, “for black walnuts to thrive in a commercial setting.”  The next most important thing is selecting several different cultivars with different ripening periods to obtain good pollination.  As Bill has learned, the orchard must be given good care, eliminating competition and using a proven spraying regime to maintain an annual nut-bearing habit and to keep pest and disease issues at bay.

This project was funded in whole or in part by the Leopold Center for Sustainable Agriculture.  Established by the 1987 Iowa Groundwater Protection Act, the Leopold Center supports the development of profitable farming systems that conserve natural resources.