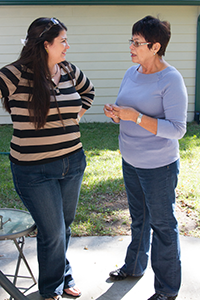 In addition to the schools and prevention agencies who typically implement Strengthening Families Program: For Parents and Youth 10-14, a variety of other groups around the country have successfully used the program:

While these groups have not received the large grants needed to complete a scientific study of the program (i.e., random assignment, control group, follow-up evaluations), most have conducted pre- and post-tests, using the surveys included in the manual.

Program Adaptation for Non-English Speaking and Other Ethnic Groups

A supplemental teaching manual is available for use with special groups for whom the videos may not be appropriate. These groups include:

The supplemental manual has the same content as the basic manual. However, instead of seeing role plays portrayed on video, parents take part in scripted role plays which are included in both English and Spanish. Role plays may also be performed by two facilitators instead of asking parents to read parts. The information delivered on the videos by the narrators is included in bulleted points for the on-site facilitator to deliver. All printed materials that are necessary for parent and family sessions, including posters, handouts, and game cards, are included in both English and Spanish. Youth and family sessions make use of the basic teaching manual, rather than the supplemental manual. It is assumed that youth in the groups can read some English for the small amount of written material in youth sessions.

Several groups in the country have successfully used this supplemental manual and conducted the program without videos for Spanish-speaking parents and other groups.

We are pleased to announce that we are now able to work with the Pan American Health Organization (PAHO) to distribute Familias Fuertes, a Spanish translation/adaptation of the current SFP 10-14.

Required materials are available for purchase to individuals who have been trained or recertified to facilitate SFP 10-14 within the last three years.

Need to verify your training date is within 3 years before ordering materials?